On August 6th, 1991, Tim Berners-Lee put up the first-ever Web page at the CERN laboratories in Europe. The Web site was http://info.cern.ch/, which is still operating. It has this to say about the anniversary:

CERN, the European Organization for Nuclear Research, is where it all began in March 1989. A physicist, Tim Berners-Lee, wrote a proposal for information management showing how information could be transferred easily over the Internet by using hypertext, the now familiar point-and-click system of navigating through information. The following year, Robert Cailliau, a systems engineer, joined in and soon became its number one advocate.

The idea was to connect hypertext with the Internet and personal computers, thereby having a single information network to help CERN physicists share all the computer-stored information at the laboratory. Hypertext would enable users to browse easily between texts on web pages using links. The first examples were developed on NeXT computers. 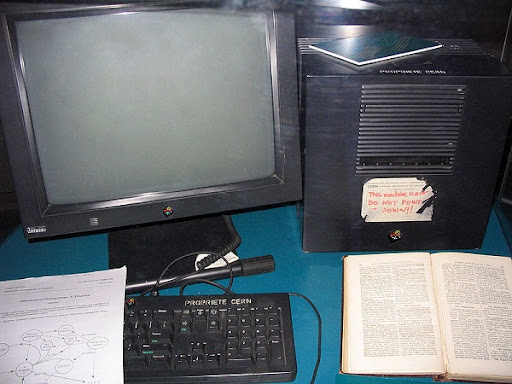 Berners-Lee created a browser-editor with the goal of developing a tool to make the Web a creative space to share and edit information and build a common hypertext. What should they call this new browser: The Mine of Information? The Information Mesh? When they settled on a name in May 1990, it was the WorldWideWeb.

Info.cern.ch was the address of the world’s first-ever web site and web server, running on a NeXT computer at CERN. The first web page address was http://info.cern.ch/hypertext/WWW/TheProject.html, which centred on information regarding the WWW project. Visitors could learn more about hypertext, technical details for creating their own webpage, and even an explanation on how to search the Web for information. There are no screenshots of this original page and, in any case, changes were made daily to the information available on the page as the WWW project developed. You may find a later copy (1992) on the World Wide Web Consortium website.

It seems strange to think that the Web is only 20 years old. It’s so ubiquitous that I wonder whether the structure of modern economies could survive without it. I can recall using ARPANET as long ago as the late 1970’s, and CSNET during the mid-1980’s, but of course these Internet precursors did not use not graphical interfaces. The World Wide Web put a graphical interface on top of the Internet’s backbone networks, and transformed the way we use it.

Congratulations to all concerned.