I was amused to read a recent report about Operation Columba (sometimes called Source Columba) in World War II a few weeks ago.  I hadn’t realized it was still of interest, because it fell out of the public imagination decades ago, but it’s nice to see some people still think it’s worth remembering.

According to Wikipedia, which is the most concise source I can find:

It involved air-dropping homing pigeons behind enemy lines in German-occupied France and the Netherlands as a means for locals to convey information, such as troop movements, to British intelligence. From 1940 onwards, hundreds of pigeon cases were parachuted into Europe, each case including – apart from the pigeon – sheets of very thin paper, a special pencil and a tube for storing the message, as well as French and Dutch instructions on how to fill in a report. A recent copy of a London newspaper was also included as proof of good faith.

In 1944, prior to the imminent Allied invasion, German counterintelligence sought to counteract (or co-opt) Source Columba by dropping pigeons of their own. These pigeon cases, accompanied by a packet of English cigarettes, were purporting to be British also and carried instructions to communicate the names of the local patriots to the Allies. The Résistance, for its part, let it be known that the best way to deal with these false birds would be to smoke the cigarettes and eat the pigeons.

Despite such interference, the operation was reported to have been remarkably successful, yielding useful intelligence in over fifty percent of the received messages … the method and a few actual cases were described in some detail in Dr R.V. Jones‘ autobiographical book Most Secret War in 1978. 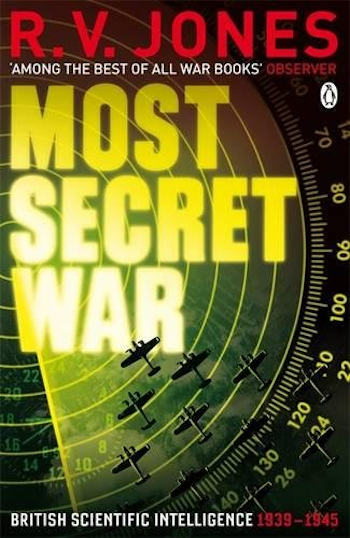 (If you don’t know much about the technological side of World War II, Dr. Jones’ book is an absolute must-read.  He pioneered so many inventions, developments and counter-measures that he’s one of the few individuals of whom it can truly be said that the war might have been lost without him.  He arguably had as much personal impact on the war with Germany as the entire Manhattan Project had on the war with Japan.  He was a remarkable man.)

It just goes to show what thinking outside the box can do.  Who would have thought that bomber crews, dropping homing pigeons out of their aircraft as they flew over occupied Europe, could be the source of a great deal of valuable intelligence?  The pigeons brought back some absolute masterpieces of intelligence, including the locations of three fighter direction complexes used by the Germans to intercept the very bomber aircraft that were dropping the pigeons.  (The complexes were eliminated by accurate bombing soon afterwards – pigeon droppings, perhaps?)