I was struck by this photograph, which appeared recently at Daily Timewaster.  It shows models of three Northrop “flying wing” designs:  the piston-engined YB-35, a later jet-propelled version called the YB-49, and the contemporary B-2 Spirit.  Click the image for a larger view. 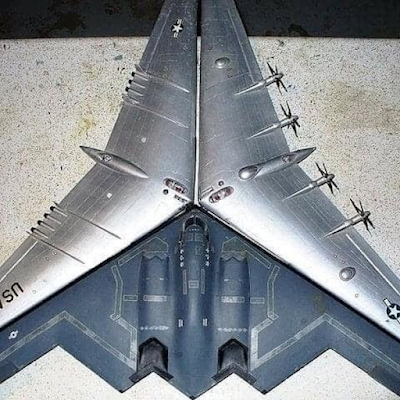 The 120-degree angle of the wing sweep, precisely one-third of a 360-degree circle, persisted from the 1940’s all the way to the modern B-2.  Jack Northrop had a good idea to begin with, so good that it hasn’t been improved upon (as far as we know).  That says a lot about his genius.

Shortly before he died, Jack Northrop had the opportunity to see how his early work on flying wings had influenced the B-2 design.  Disciples of Flight reports:

Jack Northrop retired in 1952 at the age of 57, and the Scorpion was the last aircraft he would personally have a hand in engineering.

After Jack left the aviation industry, he reportedly “dabbled in real estate,” losing most of his personal fortune. However, it became apparent that he never stopped dreaming about aviation and the flying wing design he fixated on for most of his career when, in 1976, he approached NASA. He was convinced that his flying wing concept, with its low drag and high lift, was paramount to the advancement of aeronautical technologies. NASA replied that the concept was never abandoned, which provided Jack some comfort before a variety of ailments left him unable to walk or talk.

In 1980, the US Air Force gave him an honorary clearance to see confidential aircraft designs and hold a scale model of the Northrop Grumman B-2 Spirit (the famous stealth bomber). The B-2 shared many of the design elements in Jacks flying wing designs, even down to the wingspan, which was the exact length of the YB-49. Hands shaking, Jack scrawled on a sheet of paper, “Now I know why God has kept me alive for 25 years,” most likely referencing his retirement from aviation. Just 10 months later, Jack Northrop died, on February 18, 1981.

One can’t help but wonder whether, somewhere up there, Jack Northrop isn’t experimenting with new designs for angels’ wings, seeking to improve on the original!