It seems the binoculars I used in the armed forces, and while hiking and mountain-climbing, are relics from a past age in comparison to what’s coming. ExtremeTech reports:

Proving once again that they make more than just PlayStations, Sony has introduced a startlingly cool product into the world of digital imaging: the first pair of digital binoculars with HD recording. With the camera having gone digital years ago and stereoscopic imaging being all the rage these days, this seems like an obvious move, although one into a niche market.

By going digital Sony was able to include some major technological perks into what we’ve come to expect from a pair of binoculars. In addition to viewing objects from far off these binoculars can record in up to 1080/60p (Full HD). They can also take 7.1 megapixel still images, and — because there are two lenses — 3D video recording is possible Recording is done with Sony’s Exmor R back-illuminated CMOS sensors, the same technology used in Sony’s DSC-WX1 digital camera and the Sony Ericsson Xperia Arc smartphone. Image stabilization is built in as well, which will help when recording at any significant magnification levels.

Sony’s digital binocular line consists of two models, the DEV-3 and the DEV-5, which will sell for $1399 and $1999 respectively. Both will have the same base features but the extra $600 gets buyers built-in GPS capable of geotagging images/videos and assorted accessories, including a lens cover, carrying case, and neck strap. The biggest difference between the two though is that the cheaper model only has 10x optical zoom while the DEV-5 is capable of up to 20x digital zoom. 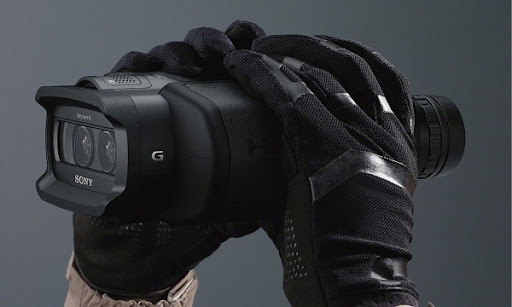 Aside from the high-tech innards and chunky exterior, the device seems to have only a passing resemblance to traditional binoculars. In fact, they look more like a streamlined camcorder, with a dual viewfinders at one end and a digital camera’s 3D lens at the other. The top of the device is home to the traditional controls one would find on a camcorder including a record button, five-way controls, the power switch, the zoom controls, and a 2D/3D button. Also on the top is a stereo microphone and a hotshoe (for mounting an LCD). The device does not bend in the middle like many traditional binoculars, but the viewfinders are capable of adjusting to the distance between the user’s eyes, and there is a dioptic adjuster so some further customization can be made. Ports include Memory Stick Pro Duo, SDXC, HDMI out, and audio input.

There’s more at the link. Photographs (of the DEV-5 model) are from Sony’s press release about the product.

I wonder how long it’ll take before an advanced degree in electronics is required to operate equipment that, in the simpler versions that were around during my younger days, could be mastered by a child?