I’ve been nauseated to read about (and see occasional clips from) Netflix’s new move “Cuties“.  Frontpage magazine summarizes it:

Cuties (originally Mignonnes), which debuted Thursday on Netflix, is the story of Amy, 11, a Senegalese girl growing up in Paris who rebels against her conservative Muslim immigrant family and seeks the approval of a bullying quartet of fellow 11-year-old girls who are absolutely clueless about sex but who nevertheless believe dressing and acting like prostitutes is the key to popularity (the ages of the actresses at the time of filming are unclear, but reportedly range from 11-14). Their aimless lives center on rehearsing sexed-up choreography to a rap song for a local dance contest.

As Amy becomes desperate to escape the stultifying, traditional expectations of the women in her family, she exhibits increasingly wanton behavior, such as posting a pic of her genitalia on social media and teaching the other girls how to rev up their dance routine by twerking (if you are mercifully ignorant about twerking, it’s a very popular move derived from strip-club lap dancing, in which females squat and shake their rear ends up and down like primates presenting themselves for mating; needless to say, this is wildly inappropriate for pre-teens). The movie culminates in an extended, raunchy dance performance in which the camera lingers repellently on the scantily-clad little girls’ pelvic gyrations, come-hither looks, and suggestive touching – of themselves and each other.

During the performance, Amy is horrified onstage by the sudden revelation of what she has become, and she turns her back on both that downward spiral and her family’s traditions, to find liberation in her own identity. But the transcendent ending of self-purification and newfound innocence feels utterly tacked-on, and it is too little, too late to rescue the film from the sense that we have been trapped in a pedophile’s dream.

Courtesy of Breitbart, here are some (thankfully censored) screen captures from the movie. 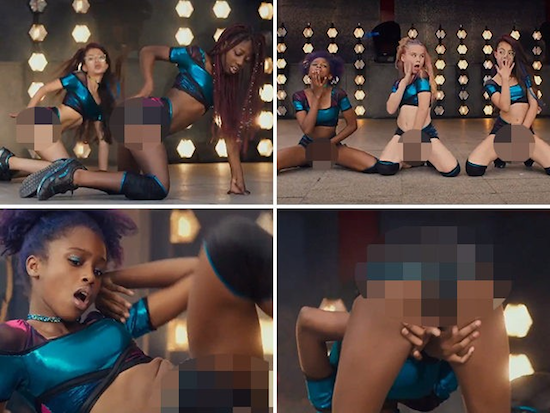 This is nothing more or less than an entertainment industry-sanctioned depiction of pedophile fantasies.  It can’t possibly be labeled as anything else, despite vigorous efforts by those promoting it to claim that the movie has redeeming values.  If it does, then monkeys picking excrement out of their butts and flinging it at each other is also morally uplifting.  I’d better be careful what I say, though:  the latter might just turn on some of the weirder pedophiles whom I had the misfortune to meet behind bars as a prison chaplain.

The mind-blowing thing about this movie is that so many critics have defended it. As Breitbart points out:

As of right now, a full 88 percent of critics approve of Cuties, Netflix’s piece of soft-core child pornography, while only three percent of the audience agree.

That’s not a typo.

Over the years, I’ve seen some wide gulfs between audience and critic at Rotten Tomatoes, but that probably takes the cake and the pie and the whole enchilada.

Keep in mind, Rotten Tomatoes has worked hard to game these scores to protect its Hollywood masters, and still it’s 88 to three.

So, despite what the fake media are telling you about criticism of Cuties coming only from the close-minded and unenlightened political right, Cuties is not proving to be at all divisive, at least not among real people. A full 1,047 audience members voted on Cuties, which means 1,047 of everyday people took the time to log an opinion, and only three percent gave it a thumbs up. That works out to a terrible approval score of less than one percent — 0.69 percent, to be precise.

I’ve been particularly sickened by Netflix’s call for us to watch the movie before we judge it.  Their arguments are self-serving and specious.  Friends, if I want to judge the efficiency and effectiveness of our city’s sewage plant, why would I swim in the raw effluent to do so?  So, too, this movie.  It’s entertainment sewage.  Why should I let it splash all over me?  I have more self-respect than that.

This is yet another example of the entertainment industry trying to condition our minds to accept the unacceptable:  to move the “Overton window” of social and cultural acceptability from where it is, to where they want it to be.  It’s the latest in a long, long line of such developments.  In the past century we’ve seen it move from eugenics, to birth control, to abortion, to pornography, to homosexuality, to transsexuality, and now to the legitimization of pedophilia.

If, after becoming aware of this movie and what it portrays and seeks to normalize, you still have a Netflix subscription (or are considering getting one), you’re either so deaf, dumb and blind to reality that you deserve pity, or you’ve allowed yourself to be conditioned for so long that your conscience is no longer functional.

Why has Netflix not already been forced to withdraw this movie by its outraged customers canceling their subscriptions?

And what does that say about our society?

I’ll leave it to you to answer those questions.  I already have in my own mind, and I’m trying to wash the fetid stench from my nostrils and the foul taste from my mouth.

Frankly, if very bad things were to happen to every adult who approved, or helped to make, or paid for, or helped to market, this movie, it would be no more than poetic justice, as far as I’m concerned.  They deserve it.  As for the parents who allowed their little girls to act in such a production . . . words fail me – almost as much as those parents have failed their daughters.