Yesterday we lost one of the greatest heroines of World War II. Nancy Wake died in England at the age of 98. She’s been a hero of mine from my youngest days, when I read Russell Braddon‘s biography of her written for young people.

Her obituary in the Telegraph reads, in part: 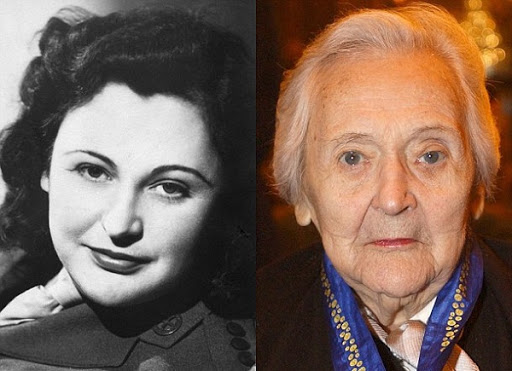 In the summer of 1936 she met a “charming, sexy and amusing” man in Juan-les-Pins named Henri Fiocca; though he had a reputation as a playboy they continued to see each other and in 1939 he asked her to marry him.

By the time France was overrun in 1940 they had married and, though initially squeamish, she was driving an ambulance. Later, back in Marseilles with her husband, she embarked on an exhausting double life.

She had acquired perfect French, and a chance meeting in a bar led to her employment as a courier for Captain Ian Garrow, a Scot who had helped create an escape route for officers and airmen from Vichy France across the mountains into Spain. Henri Fiocca contributed money freely to this enterprise.

Nancy Wake made frequent train journeys escorting escapers towards the Pyrenees; as a courier for a French Resistance group based in Toulon, she also provided the Fioccas’ chalet at Nevache, in the Alps, as a safe house. When Garrow was captured and imprisoned in Meauzae concentration camp, she contrived his escape by bribing a guard.

In the autumn of 1942 the Germans occupied Vichy France, and the Gestapo became aware of a troublesome agent whom they called White Mouse. But White Mouse proved elusive. Finally, when it seemed that the net was closing, Nancy Wake was advised by her husband to flee to England, where he hoped to join her.

In Toulouse, while she waited for the escape circuit to extricate her, she was arrested in a random round-up and accused (falsely) of blowing up a cinema. Bruised and weary after four days of interrogation, she was astonished when her group leader, Patrick O’Leary, appeared. O’Leary, who had succeeded Garrow in the role, was a Belgian army doctor (real name Albert Guerisse) and his exploits would also become famous.

He told the French police chief that he was a friend of Pierre Laval, the Vichy premier, that Mme Fiocca was his (O’Leary’s) mistress, and that the story she had told was a cover to deceive her husband. The police chief felt he understood this intimate dilemma and set her free.

Nancy Wake made several attempts to reach Spain, but was thwarted each time by arrests that broke up the circuit. On her final attempt she had to leap from a train window and run for it with several companions, dodging bullets before escaping through a vineyard. She concluded that a German counteragent had penetrated the circuit; when O’Leary was arrested back in Toulouse, she knew she was right.

Eventually she found guides who buried her in the back of a coal truck with a New Zealander and two Americans, then led her by rocky Pyrenean tracks into Spain. She reached England in a convoy from Gibraltar in June 1943.

Within eight months Nancy Wake had become a fully trained agent of the Special Operations Executive, and had been commissioned in the First Aid Nursing Yeomanry. The official history SOE in France records: “[Nancy Wake’s] irrepressible, infectious high spirits were a joy to everyone who worked with her.” She and Violette Szabo once debagged an SOE instructor in London, hoisting his trousers up a flagpole.

Her training complete, she was parachuted into central France in April 1944, landing near Montluçon. As she came down her parachute became tangled in a tree. “I hope,” said Henri Tardivat, the Resistance fighter who greeted her, “that all the trees in France bear such beautiful fruit this year.”

Nancy Wake’s role was as assistant to JH Farmer in running the circuit known as Freelance, part of SOE’s “F” section, the “Independent French” section headed by Maurice Buckmaster in London. She threw herself into building up various Maquis groups into a formidable force 7,500-strong, controlling communications with London, allocating arms and equipment that were parachuted in, and holding the purse-strings.

To coincide with the Normandy landings, the Auvergne Maquis launched a furious assault on factories and communications. A powerful German counter-attack, with aerial support, failed to stop them, but had the effect of cutting Nancy Wake’s lines of communication with London when her wireless operator, Denis Rake, expecting capture, burned the code books.

To re-establish contact, essential before D-Day, she rode a bicycle from Auvergne to Châteauroux – 250 miles in 72 hours on a round trip through German-held territory. Rejected by one Resistance wireless operator because she had no password, by good fortune she found another, who informed London of the situation. “When I got off that damned bike I felt as if I had a fire between my legs. I couldn’t stand up. I couldn’t sit down, I couldn’t walk. When I’m asked what I’m most proud of doing during the war, I say: ‘The bike ride’.”

For the remainder of the war she was involved in ambushing German convoys and destroying bridges and railway lines. When 10 men in her camp refused to perform their water-carrying duties she persuaded them by emptying a bucket over each. She interrogated a woman spy and ordered her execution, but saved two girls she considered innocent.

She was also on a raid that destroyed the Gestapo’s headquarters in Montluçon, leaving 38 Germans dead. It was, she wrote later, “the most exciting sortie I ever made. I entered the building by the back door, raced up the stairs, opened the first door along the passage way, threw in my grenades and ran like hell.”

On her 32nd birthday — shortly after the liberation of Paris — her Maquis comrades paraded in her honour at the chateau they had appropriated for their headquarters. 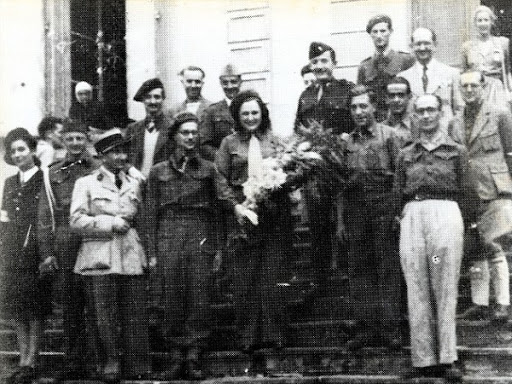 Here’s an Australian TV news report of her passing.

A film about her is apparently in the planning stages.

Nancy Wake’s exploits were – and remain – the stuff of legend in the World War II covert action community. She exhibited courage and determination fully equal, in my opinion, to anyone who was awarded the Medal of Honor or the Victoria Cross. Why she wasn’t awarded the latter decoration is still a mystery to many, given that she engaged in actual combat operations as well as clandestine spy work. (The VC has never – yet – been awarded to a woman.)

She was an extraordinary woman. We shall not see her like again. May she rest in peace.