Following my recent three part series of articles on personal defensive rifles and other riot-related posts, I’ve had a few questions from readers about how best to carry such a weapon discreetly, without anyone knowing it’s there.  I’ll address this with an AR-15 rifle, carbine or pistol in mind.  Other weapons such as shotguns may fit the same criteria.

There are several options available, but one consideration is paramount.  In general, if you’re discreetly carrying a rifle or carbine, you’ll need to do so in disassembled form.  Most AR-15’s are simply too long to fit into readily available concealment cases, so you’ll probably need to separate the upper and lower receivers when concealing them.  An average 16″-barreled carbine upper will be at least 24″ long, perhaps 27″ or more if fitted with a longer muzzle adapter such as the Blast Can.  The lower receiver, even fitted with a stock, is usually shorter than that.

AR-15 pistols (and short-barreled rifles or SBR’s) are, of course, usually shorter than that, and may fit into such cases without needing to be disassembled.  One can also shorten an AR-15 (rifle, carbine or pistol) for carry purposes by using something like the LAW Tactical folding stock adapter (shown below), which is ferociously expensive for what it is, but does work well. 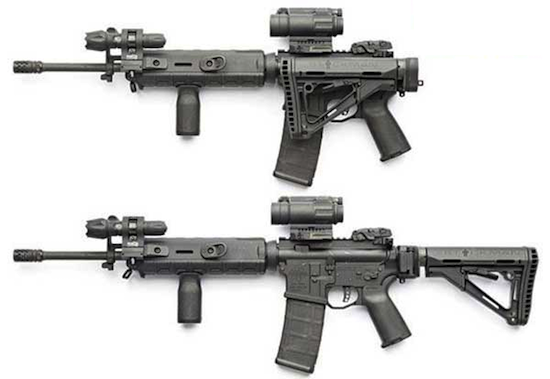 Image courtesy of Ammoland.com’s review of the product

The LAW adapter adds a little over 1″ to the length of the buffer tube and stock when extended, but of course reduces the overall length of the weapon when it’s folded.  For AR-15 pistols, be sure to use a short buffer tube with the LAW adapter.  This is because the total length of pull – the distance between the trigger face and the rear face of the tube, or the rear edge of a pistol brace if one is used – should not exceed 13.5″, according to the ATF.

As for discreet containers or cases for your long gun, the primary criterion is that the longest component of your weapon (for AR-15’s, usually the complete upper receiver) should fit inside the length of the container.  This rules out many smaller items.  Here are a few suggestions.

What about vehicles?  You can leave containers like those above in the trunk or back seat, but there’s the risk that they might be targeted by thieves.  A relatively low-cost solution for pickup trucks is to modify a truck box (see here for some examples) to contain your firearm(s).  This can even include fitting a false bottom to the box, so that your weapon(s), magazines, ammo and accessories are concealed from your workmates and friends when you open the box.  Other options are purpose-built drawers that fit under rear seats or beneath the load, such as those from Truckvault.  These are a lot more expensive, but are high-quality, and used by many law enforcement agencies.

Personally, I don’t like storing valuable weapons in a vehicle-mounted container.  There’s too great a risk that the vehicle might be stolen, or disabled in an accident so that I’m forced to leave it, or watch it being towed away.  I’d rather have my weapons in something I can take with me.

For any form of concealed use, AR-15 short-barreled rifles and/or pistols are generally simpler and easier to carry than full-length rifles or carbines.  Yes, the shorter weapons have disadvantages at medium to long ranges, but for most of us in urban environments, that’s not a major factor.

Finally, consider ways to make carrying your weapon easier when concealment is no longer as important.  A good gun sling can make this a lot more comfortable.  Tactical slings such as the Blue Force Gear Vickers 2-point sling (which I personally recommend as the best of its kind I’ve encountered) are more useful in a fight than general-purpose carry slings.

If any reader has good ideas about discreet carry of a long gun, please share them with us in Comments.  We can all learn from each other.