The fuss and bother over Florida’s “Don’t Say Gay” law – which is nothing of the sort – has infuriated me.  The law is a very straightforward regulation that prohibits any discussion of sexuality in schools that’s inappropriate for younger children;  but given the outcry from the progressive left, you’d think it was denying the very nature of education itself.  That’s nonsense, but a lot of unhinged loony-left critters are behaving as if it were true.

What makes me even more angry is to see Disney actively aiding and abetting this brouhaha.  It’s supposed to be a kid-friendly company, but more and more we’re seeing that it’s nothing of the sort – it’s using the sexualization of modern kids as a marketing tool, and positioning itself as a gay-friendly company to appeal to that demographic.  Witness its official statement on the Florida law. 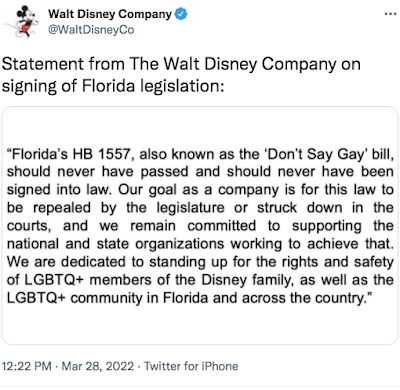 As a (very) graphic example of this sexualization of children at work, consider the design of the “bubble wand” toys marketed in association with Disney’s “Frozen” movie franchise. 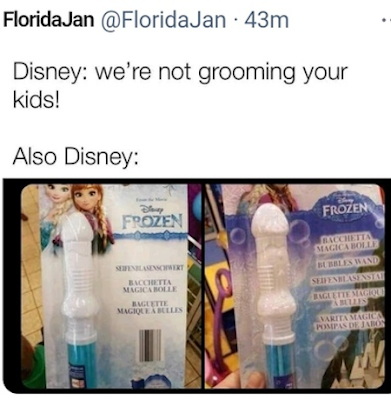 Could anything possibly be more blatant???  Really???  Do they think we’re blind?

I think Daniel Greenfield has the right of it.

Disney isn’t for kids anymore. Its movie business is dominated by Marvel blockbusters. Half of Disney+ subscribers, its big bet on the home streaming future, are adults with no children.

What about the theme parks?

60% of Disneyland visitors were adults with no children. Only 36.7% of Disney World visitors had children under 18. The largest demographic for the theme parks, like the movies, are millennials. They are also members of the fandoms who are likeliest to spend money on licensed merchandise, and on toys and movie tie-ins that are Disney’s bread and butter.

And Disney is rapidly adapting with theme parks and resorts that emphasize its Marvel and Star Wars properties more than classic fare. Its Galactic Starcruiser hotel, aimed at Star Wars fans, costs $4,809 for two adults. Why bother with kid stuff when you can sell $13 beers?

Disney may have started out feeding the imaginations of children, but now its business model is acquiring intellectual properties with active fandoms and milking the adult fans for every cent.

Its political opposition to a Florida law barring teachers from pushing sexual issues on kindergarteners might be out of tune with the old family values Disney, but the company’s actual base, like that of virtually every entertainment corp in the country, is a narrow slice of upscale urban millennials with lots of disposable income and no families. Wokes are Disney’s base.

In 1966, the idea that a single adult would spend more money on Disney merchandise than a family of four would have seemed ridiculous. In 2022, it’s just the new normal. If you doubt that stop by a theme park and see how many of the adults with no children wearing every single piece of Disney merchandise on sale would love to lecture you about queer theory.

These are the people Disney caters to now … Disney’s new woke demographic is much pickier than even the pickiest child could be.

Disney’s new demographic are adults who have never properly grown up and on some level still think of themselves as children. That’s also the profile for the average child molester. And of the kind of adult who insists that schools force children to “explore their sexual identities”.

Disney still has a profitable kids segment, but its real profits come from overgrown children born into broken families, prematurely coming of sexual age, who are eager to embrace leftist utopian causes and fantasies, who are seeking an identity and an escape at the same time.

The company isn’t for kids, it’s for broken adults. And it’s only natural that Disney would seek to create more broken adults to perpetuate its business model. A healthy functional adult isn’t nearly as profitable for the entertainment giant as a dysfunctional one addicted to its product.

Disney isn’t alone in its efforts, of course.  The propaganda war to sexualize our children is now beginning in first grade in some states, notably New Jersey, to the anger and concern of many parents.  No parent has ever been asked for permission to expose their kids to such material;  the decision was made by “woke”, politically correct bureaucrats, administrators and teachers.  Yet another reason not to submit your children to such propaganda and take them out of public schools, IMHO.

Back in 2021, Colin Wright exposed efforts to propagandize young children into early and inappropriate sexualization.  It’s well worth reading in full, to grasp the extent to which the “woke” will go to warp, twist and indoctrinate our kids away from our values.  He concludes:

We should all be very concerned that organizations like AMAZE have made their way into our children’s classrooms. Despite claiming their videos are “medically accurate” and “honest,” this is far from the truth. In reality, these videos are highly ideological and are likely making children incredibly confused about sex, gender, and sexuality.

If you are aware of this material being taught in your child’s class, please contact the school and voice your concerns.

I can only concur in the strongest possible terms.  If I had young kids and caught any other adult talking to them about such subjects in such terms, there’d be a reckoning – and that’s putting it very mildly indeed!

I also highly recommend watching the Tucker Carlson segment below.  It’s from earlier this month, and also examines AMAZE and its antics.  It’s frightening – and infuriating.

As long as we tolerate such influences over our children, we have only ourselves to blame if they succeed in warping them out of all recognition.  It’s up to us to stop such influences by protecting our children from them – and, if necessary, withdrawing our kids from any environment(s) in which they might be exposed to them even without our consent.

That includes boycotting Disney and Disney products in any way, shape or form, to avoid programming our children into this otherwise inevitable outcome: 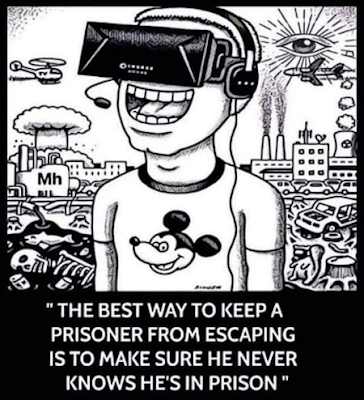