Following on from my post yesterday about our local gun show, I’m struck by how many younger shooters don’t seem to think of revolvers as defensive weapons.  They’ve been brought up on a movie and TV diet of “plastic fantastic” high-capacity pistols, that never run out of ammo and always drive the bad guy backward and spin him around a few times before he crumples lifeless to the floor.

That’s not quite how things work in reality, of course.

I think mastery of the double-action revolver is a very important step towards becoming a competent all-round handgun shooter.  The long, deliberate pull, the awareness of how spring tension is “stacking” under your trigger finger, the need to keep the sights aligned during the trigger stroke – they all demand dedication and practice.  If you can shoot a double-action revolver well, you can shoot almost any handgun well, in my experience.  I daresay many older shooters will agree with me.

There’s also the fact that revolvers eliminate a couple of common causes of firearms malfunctions.  You can’t “limp-wrist” a revolver, so that’s one failure mode out of the way.  Also, ammunition malfunctions that will tie up a pistol, requiring a clearance drill and a quick reload of the chamber, normally aren’t a factor with a revolver – you simply pull the trigger again to turn the defective round past the barrel and line up the next one under the hammer.  You can also put on a different set of handgun grips, offered by many vendors, to make the revolver fit your hand better.  That’s more difficult to accomplish with a semi-auto pistol, because the magazine inside the pistol grip makes it difficult to alter its shape and/or size to any great extent.

What’s more, revolvers can handle almost any bullet configuration, from flat wadcutters, to semiwadcutters, to WFN (wide flat nose) and LFN (long flat nose – more streamlined) heavy-for-caliber bullets, to hollowpoint and softpoint rounds, to full metal jacket loads.  Unlike pistols, a revolver doesn’t use a feed ramp to move the cartridge from the magazine into the chamber.  Therefore, bullet shapes that might “hang up” on that feed ramp will work just fine in the older, simpler mechanism of a revolver.

If you’re so inclined, you can also load more powerful ammo in a revolver than in most semi-auto pistols.  I use a S&W Model 69 Combat Magnum revolver chambered in .44 Magnum as a general-purpose sidearm for walking through the brush, as a backup to my hunting rifle.  I use the same revolver on occasion with .44 Special ammunition as an urban defensive gun, and feel very comfortable with it.  I wouldn’t use .44 Magnum loads in town due to the risk of over-penetration (remember, you’re legally responsible for every round you fire, and legally liable for any innocent persons or property it strikes), but with the lower-powered Special load, that’s not as much of a problem.

The revolver does, of course, have certain drawbacks compared to semi-auto pistols.  It’s typically a bit bulkier and heavier than a “plastic fantastic”, being made of steel or alloys.  It holds relatively few cartridges;  5-7 rounds, with a few 8-rounders, versus the average 9mm. pistol holding 15-19 rounds.  It requires more effort to master it, and to stay in practice.  It’s more difficult to reload in a hurry, requiring speedloaders or speed strips, and training in their use.

In particular, small so-called “snubnosed” revolvers are hard to control in accurate rapid fire, so much so that I regard them as counter-productive for a novice shooter.  I’ve found more beginners put off, and actually becoming scared of guns, by being sold a snubnose and finding themselves unable to shoot it well, than almost any other cause – in particular the ultra-lightweight titanium and scandium revolvers.  Those are an invitation to carpal tunnel syndrome if you shoot them a lot!  Heavier medium- and large-frame revolvers are much easier to handle, and should be a first choice until sufficient mastery is built up.

Despite those disadvantages, the revolver remains entirely viable as a defensive firearm.  Remember, according to statistics provided by the FBI, for decades the “average” gunfight has required 3-4 rounds, fired at a range of a few feet, in the space of a few seconds, to resolve matters.  It’s not always as simple as that, as the linked article points out, but under “normal” circumstances (whatever they are!), the revolver can (and often does) prevail just as easily as a pistol.  Put a bullet or three in the right place, and your problem is likely to cease being a problem.

There’s another factor at times like these, when quality defensive handguns are hard to find.  In some (not all) areas, revolvers may be more readily available than pistols, because of their “old-fashioned” image, and because people want the latest and greatest pistol they’ve seen in the movies.  I’ve profited from that attitude to pick up a couple of nice specimens over the past few months.  I have over a dozen defensive revolvers in my gun safe, ranging in caliber from .38 Special all the way up to .44 Magnum.  I’ll gladly trust my life to any of them, particularly those firing more powerful or bigger-bore rounds.

Fortunately, entry-level revolvers such as the Philippine-made Armscor M200 (a copy of the Colt, that can accept Colt grips for a better fit to your hand) and Brazilian-made Rossi’s (models R85104 and R97104) can still be had brand-new for $300-$350, if dealers have stock.  I’ve fired several of them, and they’re not bad for the price.  Middle-of-the-road brands such as Taurus (models 65 and 66, particularly used examples) and Charter Arms (particularly its .44 Special Bulldog model) can be found in the $350-$550 range in this part of the world.  None of the aforementioned will meet the “snob value” test applied by many shooters who should know better.  They’re not collector’s pieces, and they’re not the greatest quality, and they won’t all stand up to high hundreds or thousands of rounds expended in training.  Nevertheless, they’ll keep you alive in a pinch, which is precisely what they’re intended for.  Sadly, used Smith & Wessons and Colts are much more expensive, and (along with new examples) have almost priced themselves out of the market.  For lower-cost training, you can look to a revolver chambered in .22LR for practice and plinking purposes.

One word of caution:  beware of revolvers with ported or compensated barrels.  Taurus is particularly egregious about this.  In some models, they drill a line of holes on either side of the front sight (shown below), to divert propellant gases upward and minimize felt recoil. 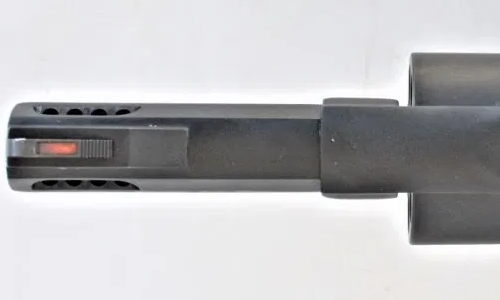 They accomplish that goal, but in a tactically unsound way, IMHO.  The holes magnify the muzzle flash above the gun in low light levels, which can destroy your night vision.  If you happen to hold it anywhere near someone (for example, a member of your family whom you’re trying to protect) the high-velocity upward-directed gases can inflict injury.  Firearms so equipped are also much louder in confined quarters, such as indoors.  Rather go for a standard barrel configuration, without ports or compensators.

Revolvers make easy-to-teach “loaner guns” for those who might need a firearm in a hurry, but have never handled one.  It’s relatively straightforward to show them how to load, unload and operate the gun.  There are no safety catches or magazine catches or slide release catches to worry about – just a cylinder release.  Revolvers have been called “the original point-and-click interface” for that reason.  I’ve taught many beginners to shoot, and I almost always start them off with revolvers, so they can master a gun in short order and discover for themselves that they can, indeed, control it.  They seldom need more than one 50-round box of ammo to learn how to handle it safely and get hits on target at short range (unlike semi-auto pistols, which usually require more than that).  In an era of ammo shortages and high prices, that’s not a bad thing.

You’ll often come across longer-barreled revolvers (typically 6″ and upward) designed for hunting or target shooting, which are too large to easily conceal beneath urban clothing for defensive carry purposes.  Here’s a tip:  look at vendors such as Numrich Gun Parts and others.  Many of them have in stock used, shorter barrels for your make and model of revolver, often at very reasonable prices.  Buy one;  have your friendly gunsmith unscrew the long barrel, screw in the short one, and adjust the cylinder gap;  and you’ve got a much more easily concealed weapon.  That can save you money, too, because longer-barreled revolvers are harder to sell in a market looking for smaller defensive firearms.  They typically bring lower prices than the latter.  I have on my desk as I write these words a used 6″-barreled revolver, bought at a more-affordable-than-usual price, with a used-but-in-great-condition 4″ barrel lying next to it.  That’s the next project for my gunsmith.

If you can’t find a semi-auto pistol to suit your needs or your budget, don’t rule out a revolver.  They’ve been saving the lives of good guys since Samuel Colt invented the first practical revolver, his Paterson Model, back in 1836.  As he said in his advertising:

Be not afraid of any man
No matter what your size.
When danger threatens, call on me
And I will equalize.

Revolvers are continuing that tradition to this day.