When a bunch of leftist politicians say the same thing in almost identical words/expressions, all popping up at the same time, you can bet your boots you’re being conned.  That applies to any political agenda, but to COVID-19 in particular, as Nick Cole points out.  Click the image for a larger view. 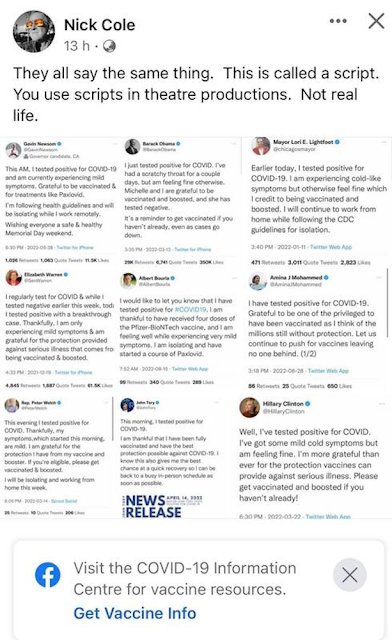 If that carefully coordinated in-your-face propaganda isn’t enough to alert you that something’s wrong, consider the vast increase in COVID-19-vaccine-related medical conditions reported by health insurers.  One of the most comprehensive analyses was conducted by German insurer Techniker Krankenkasse.  It’s mind-boggling. 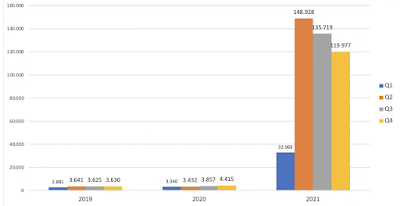 That’s one insurer in one country.  If other health insurers are experiencing similar spikes, what does that say about the dangers of the COVID-19 vaccines – all of them?  US figures via VAERS statistics are equally worrying, if not more so.

Neil Oliver puts it in a nutshell.

People like us, you and me, raised in the understanding that we are free, that we have inalienable rights, and that the institutions of this country have our best interests at heart, will tend to tie ourselves in knots rather than contemplate the idea those authorities might actually be working against us now. I took that thought of benevolent, well-meaning authority for granted for most of my life, God help me. Not to put too fine a point on it, I was as gullible as the next chump.

A couple of years ago, however, I began to think the unthinkable and with every passing day it becomes more and more obvious to me that we are no longer being treated as individuals entitled to try and make the most of our lives – but as a barn full of battery hens, just another product to be bought and sold – sold down the river.

Then there’s the so-called vaccines for Covid – I deliberately say “so-called” because by now it should be clear to all but the wilfully blind that those injections do not work as advertised. You can still contract the virus, still transmit the virus, still get sick and still die. Denmark has dropped their use on under-18s. All across the world, every day, more evidence emerges – however grudgingly, however much the various complicit authorities and Big-Pharma companies might hate to admit it – of countless deaths and injuries caused by those medical procedures.

And yet here in Britain and just about everywhere else, governments continue to try and get those needles into as many arms as possible, even the arms of the smallest and youngest. The ripe stink of corruption is everywhere. I trusted authority for most of my life.

Now I ask myself on a daily basis how I ignored the stench for so long.

People, we’ve been conned, played for suckers, manipulated, treated like ****, deceived . . . use whatever terms you like, but we’ve been used and abused by the powers that be for their own advantage, benefit and enrichment.  If you still trust a single word they say about COVID-19, monkey-pox, or any other illness, you’re crazy.  The truth is not in them.

Keep that in mind, going forward.