Some weeks ago I wrote an article titled “A totalitarian onslaught against freedom on a worldwide scale“.  In it, I said:

There are so many signs of organization behind the current chaos and disorder in the world that I’m forced to the conclusion it’s not actually chaos and disorder at all.  It’s enemy action:  organized, planned, and being carried out on a scale so vast it’s almost unthinkable.  Yet, when one examines the evidence, it’s extremely difficult to come to any other conclusion.

If you haven’t already read that article, I suggest doing so before continuing here.

Aesop, who blogs over at Raconteur Report, is a controversial figure in the blogosphere.  He’s blunt and outspoken, and has made many enemies with his acerbic, cutting remarks.  He and I don’t always agree on issues.  However, when it comes to the many crises facing the world right now, I think he sees things as I do.  Here’s an excerpt from his latest commentary.  (LANGUAGE WARNING:  It’s profane in parts, and I don’t normally include foul language in a family-friendly blog like this:  but, in order to let him make his point as bluntly here as he does in the original, I haven’t edited it out.)

People want to run around with their hair on fire about “The Joooos!”, the Illuminati, Bigfoot, and whatever other silly shit black helicopter chemtrail boogeymen they can concoct.

So follow your own logic for a minute. It isn’t all hogwash (most of it, yes, but I’ve seen no examples of global elite competency to concern me. They’re more ham-fistedly inept than Russia, for the most part, just bigger and stronger).

So why go after Russia?

It isn’t just Emperor Stumblefuck Poopypants’ kickbacks. It’s because of Russia itself.

They were ecstatic, happy as a pig in shit, in fact, when Russia was fractured, chaotic, and screwed six ways from Sunday 24/7/365. Chaos brings opportunity. Putin is a thug, an evil dick-tater, and a tactical moron who believed his own military’s press releases (and every swinging Richard out there knows that, if they’re honest with themselves for 2 seconds), but he has undeniably managed to cobble together some coherence and technological advances despite the handicaps of the entire collapse of his beloved Soviet State. Just like Mussolini made the trains run on time.

And powerful elites simply cannot have that.

Russia cannot – must not – rise from the ashes.

That’s what this has all been about, at the root.

So who wins? And Why?

Not Russia, for a certainty. And they cannot.

Ukraine? Sh’yeah, As If. They’ll be eating shit rebuilding for the next generation, minimum, best case. We never told you any differently. Their only win is staying free, but it always comes at a stiff cost.

America? Are you freaking kidding me?? Look around. The societal bore worms are rampaging through whatever cultural bedrock they didn’t manage to destroy or rot before 2020, with a will and a vengeance.

Europe? They’re even worse off. A Frenchman can’t wander Paris in safety, an Englishman’s kids are getting groomed and butt-sexed in school, and anyone in Scandinavia has moved from being largely benign and culturally homogenous underpopulated state-socialist “paradise” to outright rape capitols of the entire world.

Asia? Africa? S. America? Give a holler after next year’s famines hit the Turd World there (which is most of it), and get back to me.

So. Show of hands: Who here thinks this is all just wild coincidence?

Every single nation is getting pounded down, because of globalist extra-national interests.

Ukraine vs. Russia is just the latest pretext. Exactly like COVID, like unmitigated borderless mass immigration infestation before that, the worldwide destruction of the value of anyone’s money before that, and the utter pollution and inversion of every cultural institution: church, school, family, basic morality, and everything else, because some people in position to push a lever here, or point a rudder there, are leaning on those switches with all their might.

Because they’re quite simply Evil incarnate.

Morality, liberty, decency, virtue, dignity, independent thought and word and deed, frighten the living Hell out of them, because it takes away their power. They are Shitlords, and those things wash away the dung they thrive in: Chaos, panic, disorder, death, and destruction.

Anything that throws a monkey-wrench in those plans is your ally.

Anything that furthers it is your enemy.

Liberty, prosperity, and happiness are human exceptions, in all of recorded history, and sedimentary mountains of unrecorded time-space history before that.

Stop sportsball rooting for things that will never be, and pay attention to the whole board being played. While you can still have some effect on the outcome.

If you think Aesop and I have got it wrong, and that there’s not really a conspiracy afoot, just look at the headlines and scoops that pop up every day.  You want examples?  We’ve got examples. 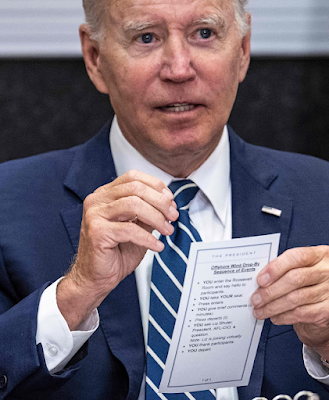 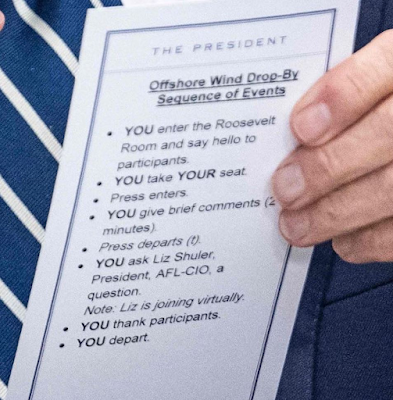 Those aren’t the notes of a man in charge.  They’re the marching orders he’s been given (along with what will appear on his teleprompter).  I wonder how – and how often – they punish him if he doesn’t get it right?  And I wonder whether any of those responsible will ever be convicted of elder abuse – as they should be?

So . . . what can we, as individuals, do about it?  We’re just so much garbage as far as the Powers That Be are concerned;  there to be used, manipulated, harvested, then discarded.

Nevertheless, there are things we can do.  This corruption is being imposed from the top down.  Resistance will have to grow from the ground up.  There will be no savior coming to rescue us, despite anyone who claims to be such a savior – he or she will almost certainly be yet another distraction thrown at us by the powers that be, in an attempt to make us follow along to the beat of their drum as we become ever more enslaved.  That applies particularly to political parties.  It’s more clear every day that we’re dealing with a Uniparty – an alliance of politicians from both sides of the political aisle, whose aim is to subject us to their whims and laws and deprive us of our freedom.  Tucker Carlson put it very well the other night.  (If you don’t want to watch the video clip below, a transcript is available here.)

We can’t rely on any elected politician to save us, or save this country.  Too many of them are not willing to actually represent the wishes of their constituents, instead regarding themselves as members of the privileged club of those who rule.  No, we’re going to have to do this without them.  We’ll have to act as individuals, and seek out like-minded individuals, and rebuild America one citizen and one family and one alliance at a time.  The rest of the world will have to do the same, because we can’t do it for them.

I can only repeat Aesop’s warning, and make it my own as well.

Anything that throws a monkey-wrench in those plans is your ally.

Anything that furthers it is your enemy.

Liberty, prosperity, and happiness are human exceptions, in all of recorded history, and sedimentary mountains of unrecorded time-space history before that.

Stop sportsball rooting for things that will never be, and pay attention to the whole board being played. While you can still have some effect on the outcome.

Note, too, that such resistance to oppression will come at a heavy price.  Some of us are already paying it (the January 6th, 2020 protestors, for example).  The rest of us will undoubtedly do so sooner or later.  Oh, well . . . we’ll be in good company.

And for the support of this Declaration, with a firm reliance on the protection of divine Providence, we mutually pledge to each other our Lives, our Fortunes and our sacred Honor.

That’s what it’s going to take.

We’re going to have to stare the Beast straight in the eye, and with all the strength of will we can muster, simply say, “No.  I will not comply.”

Our “No” can’t be only verbal, either.  Sooner or later, it’ll probably have to become a physical as well as a verbal expression.  You’ve heard of “body language“?  Call this “body politic language”.

If enough of us do that, no matter how intimidating the Beast may try to appear, it will be left helpless.

If enough of us fail to do that, the Beast will win.

Which outcome is more likely?

I’d say that’s up to us . . . and whether we’re willing to pay the price that saying “No” will entail.