We’ve had a rather substantial amount of evidence to the effect that organized pedophilia is rampant among the higher-ups in government, entertainment, and the media. Jeffrey Epstein was incarcerated for suspicion of it, and died while awaiting trial. Ghislaine Maxwell was convicted of it and is serving a long prison sentence as we speak. Roman Polanski openly admitted to raping a fourteen year old girl. Harvey Weinstein may have been involved in it. Then there’s the “pizzagate” phenomenon, which though it was (unconvincingly) pooh-poohed by the media, remains unexplained.

No decent person can understand any of it. But that doesn’t make it go away.

Now Facebook … is running an advocacy ad for normalizing pedophilia: 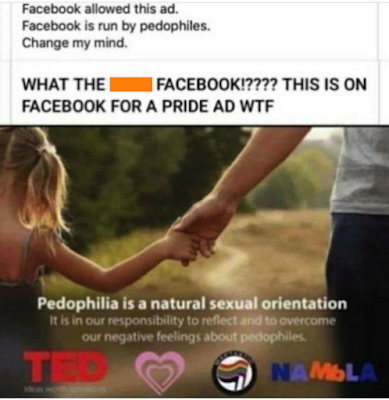 The man of normal inclinations doesn’t want to believe that such a thing is possible. Yet there it is – and a major social-media site that aggressively and humorlessly censors conservatives, pro-lifers, and a President of the United States seems to have no problem with it.

What the Hell is going on here?

The reality of pedophilia is almost too ghastly to contemplate.  In times of war across the African continent, I often came across children who’d been raped by combatants;  and, in South Africa, I more than once had to deal with the unspeakable evil of babies being raped as a purported “cure for AIDS”.  As a pastor in America, I’ve sometimes had to deal with it in some of the families I served.  As a prison chaplain, I had to deal with those who perpetrated it – and some of them were evil to the core, even claiming religious justification for their actions while daring me and the “system” to do something about it.  The number of times they chanted at me, almost like a mantra, “You can’t judge me!” . . . it was sickening.  Suffice it to say that while I won’t judge the state of anyone’s soul (that’s God’s prerogative), I can and did (and still do) judge an individual’s actions – and rampant pedophiles’ actions, and those who support them, tell me all I need to know about them.

I find it hard to believe – I don’t want to believe – that pedophilia is rampant in higher circles in this country, but the evidence certainly suggests it.  Consider the number of people who accepted Jeffrey Epstein’s “hospitality” on his island in the Caribbean, and how frantic their efforts have been to prevent knowledge of their presence coming to light.  Consider the scandals we know about, and ask yourself how many scandals we haven’t learned about.  I think pedophilia may be far more prevalent than any of us would like to admit.  The question is, how can we expose it, and punish those involved?  They’ve taken good care to cover their tracks, and they aren’t above using the official resources they control to “get to” those trying to unmask their activities, and frustrate their inquiries.

As a pastor, I shouldn’t say this, but I have a visceral and very negative response to pedophiles.  You only have to experience a terrified infant or child once, screaming, crying, trying desperately to get away from you because you’re a man, and another man has done unspeakable things to him/her, and therefore he/she can’t trust any man at all, to develop such a response.  I’ve seen that more than once.  It haunts your memories.

“Things that cause people to stumble are bound to come, but woe to anyone through whom they come.  It would be better for them to be thrown into the sea with a millstone tied around their neck than to cause one of these little ones to stumble.”

It may not be very pastor-ly of me, but I’ll be happy to subsidize the millstone(s) and the rope(s), and assist with the throwing.