In the immediate aftermath of Hurricane Ian, hundreds of thousands of Floridians found that their cellphones did not work.  The towers were inoperative, either due to storm damage or because their power had been cut off.  Many were repaired within a day or two, but apparently several hundred cellphone towers are still not working, leaving large areas without that means of communication.  Add to that the destruction of the few remaining telephone landlines, and you have a “communications desert” covering (probably) several thousand square miles.

This highlights the need for some form of emergency communication for you and your family members, and perhaps for close friends or associates who will band together to help each other in times of need.  There are any number of fancy radios and accessories out there, and a brief Internet search will find more information about them.  I’d like to keep it simple and low-cost, and talk about the Family Radio Service (FRS) and General Mobile Radio Service (GMRS) systems.  I’ll also mention Citizens Band (CB) radios.

Briefly, FRS was authorized in 1996.  Its radios are limited to 2 watts maximum power, and have 22 channels (shared with the more powerful GMRS service).  Under normal operating conditions, its usable range is up to a mile;  under exceptional conditions, it might reach out to 30 miles or more, but that’s very rare and unusual, and won’t be feasible using a hand-held radio.  It’ll need a base station with a longer and more sensitive antenna, and no interference with line-of-sight between transmitting and receiving stations (e.g. buildings, hills, etc.).

GMRS requires a license in the USA, although no tests are involved;  merely the payment of a fee (currently $70) to the FCC for a 10-year permit.  It uses the same channels as FRS, plus a few more, and can transmit at up to 50 watts power (although 5 watts is more usual in hand-held devices).  Range is not necessarily greater than FRS, particularly if buildings or hills limit line-of-sight distances, but due to its higher power, GMRS signals mostly have less interference and “noise” than FRS.  GMRS radios can also use detachable antennae, giving greater flexibility.

CB radios are well-known in the USA, particularly thanks to their use by truckers and the many CB-themed trucker movies of the 1970’s.  They use 40 channels, and operate at up to 4 watts power (although single-sideband [SSB] radios can use up to 12 watts).  Their effective range is 1-2 miles in areas with obstacles such as tall buildings or hills, and up to 20 miles in line-of-sight (although half that is considered good by many users).  They’re popular with truckers and other road travelers, and also with boaters on inland and coastal waters.  However, they are so widely used that interference from other transmissions is common in heavily trafficked areas.

What about costs?  These vary widely.  For a simple comparison, I’ll take handheld radios manufactured by Midland, a prominent US vendor, and compare their prices on Amazon.  There are dozens of manufacturers and scores of models available – these are merely examples.

I highly recommend reading customer reviews of the radio(s) in which you’re interested.  The ratings are all over the place, some excellent, some terrible, but a lot seems to depend on where the customer is located and the kind of terrain/obstacles around which the radio(s) will be used.

For most of us (including yours truly) cost and complications are limiting factors.  The cost factor speaks for itself – if I want every member of my family to be able to communicate with each other in an emergency, I can’t afford anything gold-plated or high-technology.  Furthermore, I need something relatively simple and easy to use, which doesn’t require a lot of training to make sense of it.  (I trained in radio communications in the military, which helps, but many of those with whom I might need to communicate didn’t, and don’t have that level of knowledge.  The K.I.S.S. principle definitely applies, particularly for families with younger children!)

For those reasons, my basic emergency communications outfit is the Midland GMRS two-way radio mentioned above.  I bought the waterproof version, which was only available in a camouflage finish at the time.  Click the image for a larger view. 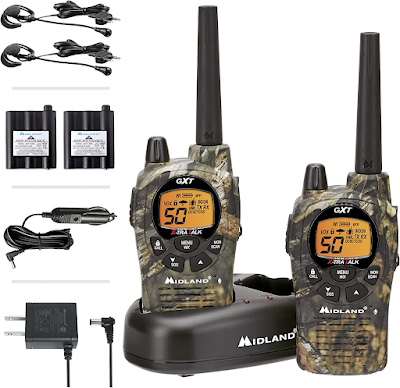 They come with a rechargeable battery, or can use 4 AA batteries if they can’t be recharged for some reason.  They offer reliable communication up to a couple of miles in the area in which I live, and sometimes more depending on atmospheric conditions.  On the road (for example, if my wife and I are traveling in separate vehicles) they’ll help us keep in touch as long as we aren’t more than a mile or two apart.  For a low-cost short-range communications option, that’s about as good as it gets.

For extended range and/or more difficult operating conditions, you’ll have to spend more money.  High-end CB radios can reach out 10 to 20 miles with the right antenna, but they’re typically vehicle- or desk-mounted units (not hand-held), using vehicle or mains power, and cost up to several hundred dollars.  There’s also full-blown “ham” radio equipment that requires a special license, but can communicate over hundreds or even thousands of miles – and can cost thousands of dollars, too!  I’m not going to get into that here.

If you don’t have any form of emergency communication other than your cellphone, I recommend you look into one of the options mentioned above.  They may turn out to be a life-saver – and I’m not exaggerating when I say that.