I did a double-take when I saw this photograph on MeWe of a modern interpretation (complete with stiletto heels) of a pair of sabatons.  Click the image for a larger view. 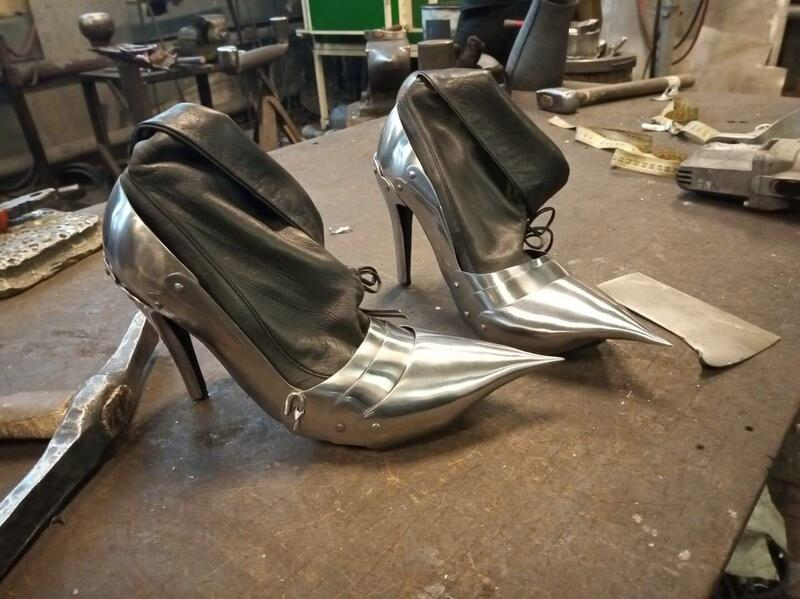 Sabatons were part of military armor for centuries, evolving from the pointed style shown (sometimes called sollerets) to a flatter, blunt-toed style in the sixteenth century.  They were de rigeur for knights, and also worn by men-at-arms (usually of the gentlemanly class) who could afford them, or captured them from an enemy. (A good suit of armor would cost many years’ wages for a peasant or common soldier, so they had to make do with padded cloth and leather.)

It’s amusing to look at those modern works of “fashion” while imagining someone trying to walk in them down an icy, snowy sidewalk.  I reckon the slipping and sliding would be epic!  However, I tried to imagine what it must have been like to actually fight in them (without the stiletto heels, of course).  On horseback they’d be essential to protect the wearer’s foot from blows delivered by infantrymen trying to stop him;  but if the knight fought on the ground (as was common in, for example, the Wars of the Roses), that same slipperiness would have made them more of a liability than an asset in wet or muddy conditions.  How would they – how did they – keep their footing?

I can see them being left off in favor of heavy leather boots for fighting on foot, because for an enemy to bend down to strike at one’s feet would leave them very vulnerable to a counter-stroke;  but I can also see that other battlefield hazards (e.g. sharp caltrops scattered by an enemy, or spears wielded by footmen) would render boots as dangerous as sabatons for their wearer.  Also, what if one had to fight first on horseback (e.g. in a charge), then on foot if one’s horse was injured or killed?  The sabatons might change from an asset to a liability in a matter of seconds.

I simply don’t know.  I’ve read something of the period, but not enough to be able to answer my mental questions.  What about you, readers?  Has anyone gone into this subject in more detail, to provide us with a better answer?  If so, please let us know in Comments.  Thanks!