There appears to be a growing movement around the world to “shut out” those who will not accept the COVID-19 vaccination.  They’re being denied basic rights like access to stores, ordered to quarantine themselves, threatened with imprisonment if they refuse to comply, and more of the same.  A few examples from overseas:

Every state in the union has its own measures in place – far too many to summarize here.  Some are very restrictive, others less so.

I’ve made my own position on COVID-19 vaccination very clear.  I regard the existing vaccines as profoundly unsafe, and more of a health risk than the disease itself (which I’ve already had twice in two years, and come through with no major difficulties despite being in several of the high-risk groups for it).

If you don’t agree with that perspective, consider this information from the World Health Organization (click the image for a larger view): 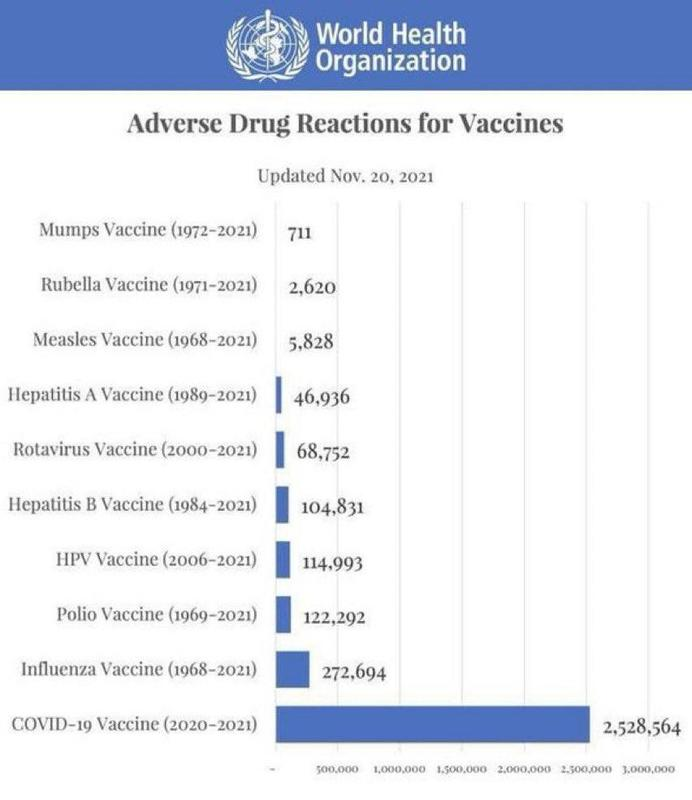 (EDITED TO ADD:  To access the raw information and a breakdown of reported reactions, search http://www.vigiaccess.org/ using the keyword “COVID-19 vaccine”.  At the time of writing, the total number of adverse reactions recorded had risen to 2,703,969 in 2021 so far.)

Obviously, those raw numbers are hedged about with official warnings and cautions about the further investigations that are needed.  That’s a given.  Nevertheless, if you can look at those bars on the graph and tell me that you’re still absolutely confident that the available COVID-19 vaccines pose no risk at all to your health . . . all I can say is, you’re living in cloud cuckoo land.

Meanwhile, those of us who won’t accept vaccination find ourselves increasingly shut out of normal everyday life in many parts of the world.  Well, if the powers that be want to play that game, let’s do the same.  We can inflict just as much pain as they can, if we put our minds to it.  A few ideas:

As John Nolte profanely points out, speaking about right-wingers in general rather than only those opposed to COVID-19 vaccinations:

And so, like a mob of fat, comfortable, uptight Margaret Dumonts in the face of Groucho Marx, the media’s jaws still drop when our response to their shame campaigns is a middle finger and poke in the eye.

This is the beauty of building our own thing. All these filthy crooks can do is sputter out their helplessness. But, best of all, they sputter it from their own velvet echo chambers.

Yes, of course, we will build our own thing, you fascist Nazis.

That’s what free people do; that’s what the human spirit is engineered to do. Even in the Soviet Union, even under Nazi occupation, people never stopped fighting to be free, to live in a country where they could say and do whatever they wanted. If Hitler and Stalin couldn’t stop us, do you think a bunch of snobby “journalists” and a pasty, dead-eyed freak like Mark Zuckerberg will?