The American Spectator points out the obvious.

The water level in Lake Mead is reaching record lows and the popular narrative maintains that drought brought on by human-caused climate change is to blame. But the government’s own data from the Bureau of Reclamation shows this is not true.

As can be seen in the Bureau of Reclamation’s official estimate of the yearly natural water flows into Lake Mead, there has been no long-term trend in water flow into the reservoir.

Most of the water supplying the Colorado River at this location comes from snowmelt in the upper Colorado River watershed. The April snowpack in that region also shows no trend.

So, why is Lake Mead losing so much water? The answer is overuse. The Colorado River Basin Water Supply and Demand Study, published in 2012, showed that water demand from Lake Mead increased rapidly over the decades but remained less than water supply until around 2000, after which usage exceeded the available water supply in most years. This is what can be expected when we build cities in the desert (e.g. Las Vegas) and grow crops on arid land where there is insufficient natural precipitation.

The problem is that lazy and biased reporting — even in some scientific reports — has led to the widespread misperception that climate change is responsible for Lake Mead losing water. It’s not.

Lake Mead is being drained. It’s not climate change.

The eco-weenies keep on blaming climate change for everything they can think of, even when the facts demonstrate that they’re lying through their teeth.  Remember all the moaning and posturing about rising sea levels flooding low-lying areas, even whole countries?  Well . . . 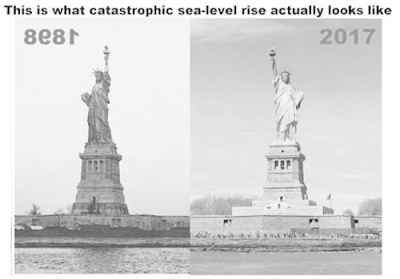 It’s amusing to see the so-called “fact-checkers” try to debunk that image.  They argue that unless the two pictures were taken at the same state of the tide, they can’t be directly compared;  and they claim that sea levels have, indeed, risen at the Statue of Liberty.  However, their claims are so silly on the face of it that they lack credibility.  For example:

“The (relative) sea level rise (SLR) in NYC (Battery tide gauge) is about 1.1 inches in every decade, or about a foot in a century,” Dr Klaus Hans Jacob, Special Research Scientist in Seismology, Geology and Tectonophysics at Lamont-Doherty Earth Observatory at Colombia Climate School, told Reuters.

“A photographic comparison between 2020 and 1920 is meaningless since the daily tides in New York harbor are several feet every day, and therefore are larger than the SLR for the last 100 years,” he added.

OK, Dr. Jacob – but when were your sea level rises measured?  At what stage of the tide?  Neap tide?  Flood tide?  Spring tide?  Your measurements are subject to the same problem.  Also, at “about 1.1 inches in every decade”, the sea level rise between those two pictures would theoretically be (over 119 years) about 13 inches – just over a foot, and also lost in the rise and fall of the tides that span several times that distance, twice every day.  How would we tell?

Sorry.  I have no problem agreeing that the climate is changing.  It’s done so since before the dawn of recorded history, and will continue to do so long after I’m dead and gone.  However, when climate change advocates deliberately falsify the historical record, and massage facts and figures to make them conform to their theoretical models, I lose all patience with them.  If they expect me to destroy the energy and economic foundation of our present civilization due to “feelz” rather than facts – no, thank you.