A teenager has come up with an extraordinary way of taking interesting photographs – but he has not lost his marbles, indeed he is instead using a clear marble as his point of focus, and the bizarre technique has led to some breath-taking images.

Caleb Tenenbaum, a 16-year-old from New Jersey, only took up photography last August after seeing a photographic exhibition in which the snapper had used a crystal ball to create a similar effect.

The teen has entitled a collection of his photographs ‘Life Through a Marble’ where he has used a 1cm marble as a view finder on the landscape around where he lives. 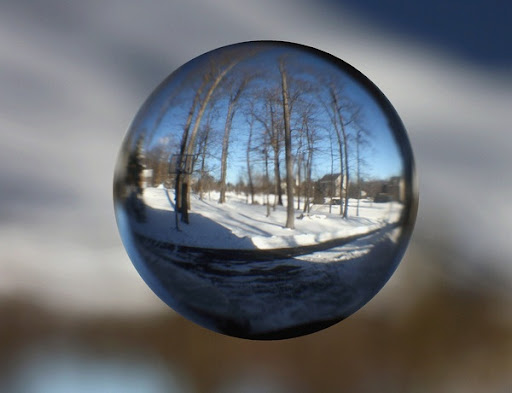 Tenenbaum dreamt up the idea after seeing other snappers produce similar collections, but with much larger crystal balls.

He said: ‘I saw a few pictures taken of flowers in water drops or scenes in giant crystal balls and I thought I could take the idea of refractions and reflections, innovate it, and make it my own.

‘I realised I had discovered something pretty special when I took the first picture. Before even processing it I realised it all worked perfectly.

‘The focus was superb, the composition was right on, and it was eye-catching.’

Tenenbaum is still at school and does not possess any training in photography, but he is determined to turn his hobby into full-time work once he has finished his schooling.

There’s more at the link. You’ll find more of his photographs at his Flickr photostream.

I have to hand it to Mr. Tenenbaum. That’s pretty creative by anyone’s standards! I’d never have thought of using an ordinary glass marble, with all its optical imperfection, as a mirror on the world. I hope he succeeds in his plans.