We’ve covered the widespread and very, very serious negative reactions to the COVID-19 “vaccines” (which aren’t really vaccines at all, except for the J&J variant) in these pages before.  Here’s the latest summary for the USA (clickit to biggit) from the VAERS database: 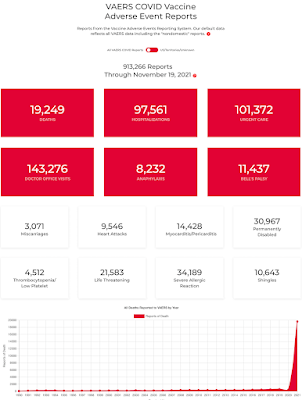 The total number of adverse reactions reported in the USA is 1,084,457 as of that date.  Over one million adverse reactions… yet the media, and the medical establishment, trumpet how “safe” the vaccines are!  If that’s “safe”, then I’m Mata Hari!  (The reports for Europe are just as bad, if not worse in certain countries.)  Of particular importance is the incidence of heart problems (particularly pericarditis and myocarditis) encountered among the vaccinated.  Another looming issue is the rise in stillbirths among vaccinated pregnant women:  “We are currently on pace to see a yearly total of 2,838 recorded fetal deaths following COVID-19 shots, while the yearly average of recorded fetal deaths following the vaccination of pregnant women for the past 30 years has been an average of 74 fetal deaths per year.”

Medical “science” is racing to explain away those reactions (which, as the bottom graphic above shows, are worse than all previous vaccines of any kind since records began to be kept).  Guess what excuse they’ve just invented?

Up to 300,000 people in the UK are facing heart-related illnesses due to post-pandemic stress disorder (PPSD), two London physicians have warned.

This could result in a 4.5 per cent rise in cardiovascular cases nationally because of the effects of PPSD, with those aged between 30 to 45 most at-risk, they claim.

Mark Rayner, a former senior NHS psychological therapist and founder of EASE Wellbeing CIC, said that as many as three million people in Britain are already suffering from PPSD, thanks to stress and anxiety caused by the effects of Covid-19.

He fears this could result in a dramatic rise in physical health issues, such as coronary heart failure, if cases are not detected or treated early.

Mr Rayner said: “PPSD is a very real problem on a massive scale. As well as the condition itself with all its immediate problems, one of the biggest collateral issues is the affect it can have on heart health.

“It is widely recognised that reducing stress and mental health problems is crucial to the prevention and recovery of cardiovascular events such as heart attacks and strokes.

Mr Rayner warned that without at least doubling the current funding, the NHS will not be able to tackle the “trauma timebomb”, which could have potentially fatal consequences for those suffering with long-term PPSD.

Meanwhile, Tahir Hussain, a senior vascular surgeon at Northwick Park Hospital in Harrow, said he has seen a significant rise in cases where he works.

He said: “I’ve seen a big increase in thrombotic-related vascular conditions in my practice. Far younger patients are being admitted and requiring surgical and medical intervention than prior to the pandemic.

“I believe many of these cases are a direct result of the increased stress and anxiety levels caused from the effects of PPSD.”

Guess what?  It’s not the vaccines’ fault at all – it’s stress!  That’s why so many vaccine recipients are dropping dead with heart problems!

(If you believe that, there’s this bridge in Brooklyn, New York City that I’d like to sell you.  It’s a bargain!  Cash only, please, and in small bills.)

Note, too, that this excuse will also be used to motivate more money for the medical establishment:  “without at least doubling the current funding, the NHS will not be able to tackle the ‘trauma timebomb’, which could have potentially fatal consequences for those suffering with long-term PPSD”.  Yeah, riiiiiiiiight.  It’s not the vaccines’ fault, so go on foisting their poison on as many people as possible – and give us more money while you’re at it, so we can treat a wholly invented, non-existent stress disorder!

D’you ever get the feeling that the medical establishment as a whole is trying to play us all for suckers?  If you haven’t, I suggest you don’t understand the reality of the situation.  Do they really think we’re that stupid?  In all the previous pandemics in human history, nobody ever even thought about, or postulated, or theorized, or investigated this syndrome… yet suddenly, out of nowhere, it’s a major factor in fatalities among the vaccinated?