I noted this report following Hurricane Laura a couple of weeks ago.

Huge swarms of mosquitoes are draining blood from and killing livestock in Louisiana after Hurricane Laura swept through the state.

The mosquitoes, which were pushed from Louisiana swamps as a result of the storm, are draining blood from deer and cattle, as well as a few goats and horses, who become exhausted from blood loss and die, veterinarian Craig Fontenot told the Louisiana State University Agricultural Center.

Jeremy Hebert, an LSU AgCenter agent in Acadia Parish, said the mosquito population “just exploded in the southwest part of the state”.

I wasn’t surprised to read it.  Coming from Africa, I’ve long been aware of a similar phenomenon when the rainy season begins across much of that continent.  Newly bred clouds of mosquitoes kill thousands of animals, and can even kill humans if they don’t protect themselves.  They also carry malaria, among other diseases, which kills tens of thousands more people each year.  They get very big, too . . . we used to joke that one of them landed at a South African Air Force base in Namibia, and the ground crew put in a hundred gallons of gas before they realized it wasn’t a fighter!

In Alaska, Miss D. informs me that the coming of the Trans-Alaska Pipeline actually increased animal populations, contrary to the fears of environmentalists, because it was built on artificially elevated land above the tundra. 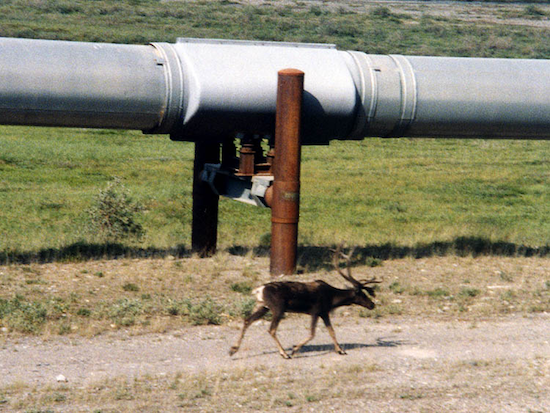 This meant that the (relatively strong) prevailing winds affected many of the mosquitoes in the area.  As they flew higher to clear the raised ground, the wind took them away.  That, in turn, meant that caribou and other animals that took to the higher ground beneath the pipeline were no longer preyed on as much by mosquitoes, and consequently more of them survived.

Most urban residents have no idea just how hazardous even tiny insects can be in the wild.  It’s one of the reasons I laugh when I hear so many “preppers” discuss how they’re going to retreat to the wilderness when SHTF or TEOTWAWKI happens.  Most of them haven’t included much in the way of anti-allergy, anti-insect-bite or insect repellent medications in their disaster preparations.  That’s yet another reason why I suspect they wouldn’t last very long out there . . .