(To those waiting for my traditional Monday morning “Memes That Made Me Laugh” post, it’s coming!  Check back shortly after 9 a.m. Central time.)

The fifth volume in my ongoing Ames Archives series of Western novels has just been published, in e-book and paperback.  It’s titled “Silver In The Stones“.  (A grateful tip o’ the hat to fellow author, blogger and good friend Alma Boykin for coming up with that title.)  The cover image is, as always for this series so far, one of Frederic Sackrider Remington‘s works. 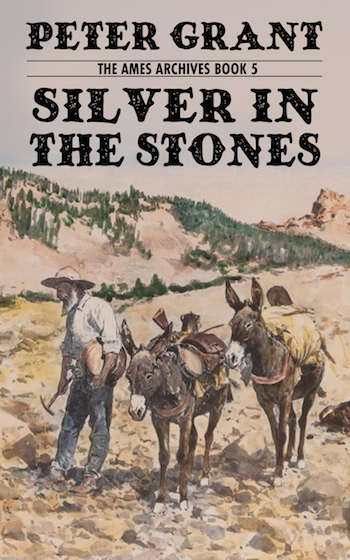 What comes with a silver boom? Backstabbers, claim-jumpers and con men – and that’s just the start.

Walt Ames is working hard to keep his horse ranch afloat and his transport business in motion when silver is discovered on his property. It’s going to take cunning, determination and more than a little luck to investigate the claim while others are trying to kill him for it.

Can he keep his business and integrity intact, or is everything Walt loves going to fall prey to the perils of a silver rush?

For a foretaste of what it’s about, I published two excerpts from it in prior “teaser” blog posts, here and here.

This is a very important book for me, because it’s the culmination of two years of hard work to get back into the writing game.  After suffering a heart attack (my second) in November 1919, followed by two bouts with COVID-19 in 2020 and 2021, my writing muse took an extended vacation and left me hanging.  It was a difficult time, because I depend on my writing to make a living.  Fortunately, I had some reserves, and sold a large chunk of my gun collection.  Your support through several raffles last year helped bring in enough to keep body and soul together.

I tried hard to keep writing, even though the medications I was using and general physical lassitude often made this difficult.  I found that I would often get bogged down in a particular book if I focused on it for too long, so I started working on up to six books at the same time.  If I found myself blocked on one, I’d shift to another, work a few days on it, then try a third.  That helped me to work through the mental and physical blocks, and produce at least some output.  As a result, all of those books are now well on the way to completion, and I hope to publish one every couple of months over the next year or so.  There are two new series (probably trilogies) among them, plus a number of continuation volumes of existing series.

This novel required a huge amount of research.  It touches on so many critical historical elements that I spent literally months going into them before I began writing.  (My wife described in an article yesterday some of the research we did in Colorado.  That trip was to prepare for this book and the next one, which will deal with the “railroad wars”.  I traveled most of the routes described in this book, and saw most of the mining locations mentioned, both existing and “ghost” towns.  I learned a lot.)  Every fact I’ve mentioned in this book is historically accurate.  I hope you’ll enjoy its wider, more in-depth look at the issues around the Wild West, compared to the usual “shoot-’em-up” scenarios found in pulp Westerns.

I’d like to ask for your help, please, readers, in two ways.

Thanks in advance for your assistance.

I hope you enjoy “Silver In The Stones”.  Stand by in January, God willing, for my next book, Volume 6 of the Maxwell Saga, titled “Venom Strike”.