I was surprised to read this report.

The US Air Force (USAF) is funding development of a new pulsejet-powered decoy as it continues seeking cheaper and simpler forms of unmanned air vehicle (UAV) and cruise missile propulsion.

Pulsejets have been in operation since World War II, powering Nazi Germany’s V-1 flying bomb, an early cruise missile launched in the thousands from sites in occupied France against the UK … The British nicknamed the V-1 “buzz bomb”, a nod to the weapon’s noise.

Wave Engine says it has made improvements that give pulsejets advantages over jet turbines.

Mom endured the German bombing of Britain during World War II, from “The Blitz” of 1940-41 through the Vergeltungswaffen of 1944-45.  She spent many nights on top of buildings with a stirrup pump, a bucket of water and a bucket of sand, ready to put out incendiaries that might fall on the roof and cause a fire.  She’d have looked very much like this lady (image courtesy of Wikipedia). 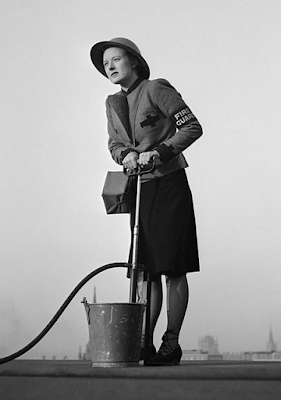 She remembered, and described to her children, the sound of German V-1 “flying bombs” in 1944, their pulsejet engines reverberating and snarling as they flew overhead.  She told us that you only had to worry about them if the engine cut out.  That meant they were about to crash and explode, often with devastating results.

Here’s what the engine sounded like from the ground.

I presume the modern version of the pulsejet will sound less “snarly” than the original.  Nevertheless, if anyone’s still alive who remembers what they sounded like during the 1940’s, it might bring back memories they’d rather not have . . .