I had to smile at this report.

Rabbi Raziel Cohen of Morris County, NJ, has designed a $550 kapota — the long jacket donned by married Hasidic men on Shabbat and holidays — meant to comfortably conceal a gun.

After he got married about two years ago and graduated to wearing a kapota, “I realized right away it was a problem,” said Cohen, 24, of the cumbersome garment, which is traditionally fashioned with buttons and a belt known as a gartel.

The issue: He couldn’t easily pull out the Glock 19 or Glock 17 he always wears during synagogue.

“When you draw a gun, you have to do it safely, quickly and efficiently — ensuring that it’s not a risk to the person drawing the gun or to those around him,” said Cohen, an NRA-certified firearms instructor.

So he designed a “Tactical Kapota” with quick-access snaps hidden under a decoy version of the buttons traditionally required for the jacket. 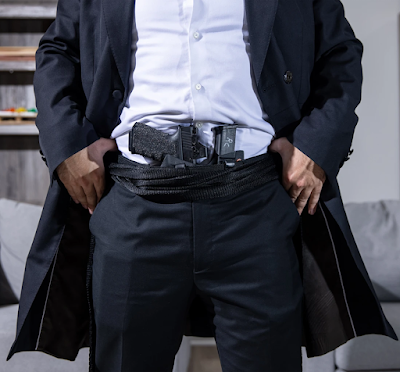 A rise in anti-semitism and attacks on places of worship has inspired more Jews to carry weapons … “The danger increased. I’d like to be safe and be in control — I don’t want to be a victim,” said Aaron, a 20-something Hasidic New Yorker who asked The Post to withhold his last name for safety reasons.

Of course, the jokes are already flying.  The New York Post headlined its report “It’s a schtick up!”  I like the commenter who tried to imagine Bruce Willis wearing something like that in a Die Hard movie.  “Shalom, mother******!”

I’m not in the least disapproving of a rabbi doing that.  During my service as a minister of religion, there were times and situations that were a little . . . fraught.  Having learned the hard way, I carried a gun under my vestments, and wouldn’t have hesitated to use it if necessary to defend my congregation.  I knew many priests and pastors who did the same in Africa.  It would probably horrify most American priests to even think of it, but in the “real world” out there, where one has to protect oneself or become a victim (sometimes several times each day), it’s an accepted norm.

We pastors (of all denominations) used to joke that we wouldn’t have to stop at shooting an attacker:  we could either administer the Anointing of the Sick before he was taken to hospital, or give him the Last Rites if that looked necessary – and then bury him!  It would probably be ecclesiastically (not to mention legally) frowned upon, however, if we took up a collection from him . . .