I’m afraid our President has (yet again) comprehensively failed one of the most basic tests of leadership. He seemingly cannot and will not accept responsibility for the situation in which this country finds itself under his direction. He seems willing to blame anybody and everybody else for our predicament, except himself . . . and what’s worse, his devoted followers are eager to do likewise.

The most recent example came in a fund-raiser yesterday. Reuters reports:

President Barack Obama said on Monday he inherited many of the country’s problems with high debt and deficits when he entered the White House, sounding a theme likely to dominate his 2012 re-election campaign.

Speaking at a Democratic fundraiser, where families paid $15,000 to get a picture with him, Obama defended his economic record and noted that problems in Europe were affecting the United States.

“We do have a serious problem in terms of debt and deficit, and much of it I inherited,” Obama said.

There’s more at the link. Bold print is my emphasis.

President Obama is undoubtedly correct when he says that he inherited much of our present economic problems from the previous Administration, and from abroad. However, that doesn’t alter the fact that irrespective of where the problems came from, it’s his job to solve them. He’s been in office for more than 2½ years, and had plenty of opportunities to implement policies that would correct past mistakes. Continuing to blame others for those mistakes, instead of fixing them, won’t do any longer. An earlier Democrat President made that clear.

… in an address at the National War College on December 19, 1952 Mr. Truman said, “You know, it’s easy for the Monday morning quarterback to say what the coach should have done, after the game is over. But when the decision is up before you — and on my desk I have a motto which says The Buck Stops Here’ — the decision has to be made.” In his farewell address to the American people given in January 1953, President Truman referred to this concept very specifically in asserting that, “The President–whoever he is–has to decide. He can’t pass the buck to anybody. No one else can do the deciding for him. That’s his job.”

President Truman kept on his desk in the Oval Office this very famous sign: 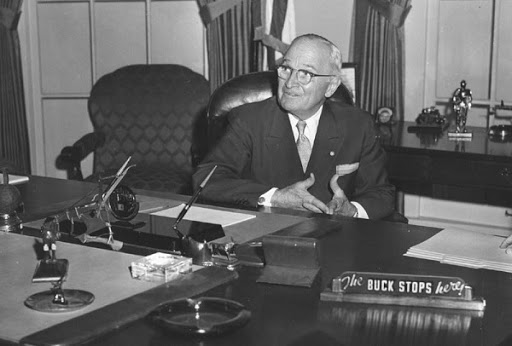 I wonder whether the Truman Library might be willing to send a copy of that sign to President Obama, to remind him to shut up and let his actions speak louder than his words? Excuses just won’t cut it any more. If he won’t learn that lesson, this bumper sticker is likely to be the next meaningful sign he encounters: