I was reading other blogs yesterday when I stumbled across an article on “Packing your backpack” over at Wirecutter’s place.  It brought back memories.  I used to enjoy hiking, scrambling over the Cederberg and Drakensberg in South Africa, and tackling short stretches of the Appalachian Trail in the USA.  I’ve humped a backpack over many miles.

Sadly, following my disabling injury in 2004, those days are over.  When your back is held together by titanium straps, and you’ve got nerve damage in one leg, that makes hauling a heavy backpack a non-starter, to put it mildly!  I haven’t done any hiking since then.  However, that doesn’t mean I might not have to do at least some, in an emergency:  and I’d like to have some way of dealing with a bug-out bag if I ever have to use one.  I can carry a duffel bag or sports bag in my hand, but I might need both hands free to deal with other problems.  I’ve adapted a lightweight chest harness (similar to this one) to carry a few essentials, but it can’t hold much;  and besides, weight on my torso is a problem no matter where it’s carried.  My back lets me know all about that in short order!

I know there are specialized hiking trailers (such as this one or this one) out there, but I’ve never seen one “in the wild”, so to speak. 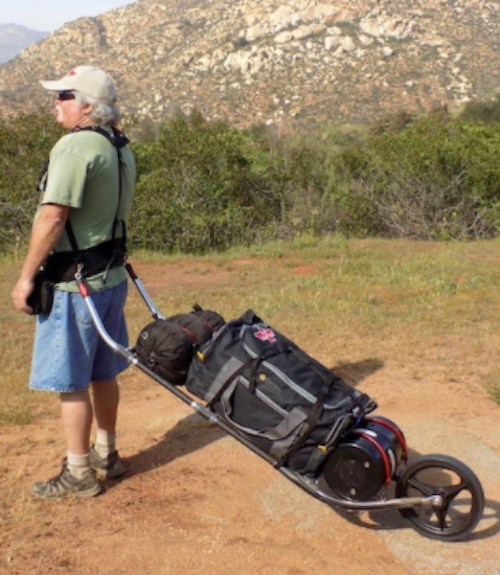 They’re also rather expensive.  Most seem to put a lot of weight on the spine and/or hips, and also have only one wheel, which would seemingly make it difficult to keep them stable and upright over rougher terrain.  Have any of you used them?  If so, how did you find them?  Do they put less strain on your back than a heavy rucksack?

I’ve heard that some people have adapted lightweight bicycle cargo trailers or game carts to carry camping or hunting gear.  This is probably fine on roads, or across flat terrain without much in the way of obstructions, but wouldn’t work across rough country.  Also, one would have to limit the weight in the trailer or cart, because on upward slopes the trailer would pull or push one back, while on downward slopes it would pull or push one forward.  Hiking poles might help stabilize one’s movement, but not if both hands are on the trailer – and if it’s heavy, it’ll need both hands.  There’s also the obvious problem of carrying a trailer like that in one’s vehicle.  Unless it was collapsible, it’d take up so much space that it would get in the way, more often than not.

Finally, for urban use, I know a couple of people have adapted golf carts to carry a backpack instead of a bag of golf clubs.  They’re small, lightweight devices that won’t take up much room when stored in a vehicle, which is a useful advantage.  However, I’m not so sure about how they’d do over rougher terrain.  Cross-country hiking can be a lot tougher than a golfing green!

Can any readers offer helpful suggestions?  (And no, I don’t mean tactical wheelbarrows!)  If so, I’d love to hear them, and I’m sure other readers would also benefit.  Please let us know in Comments.