This will be a very short Saturday Snippet.  I’ve had a heck of a week, with a patio slab being cast and later framed for a roof, our electrical main board being swapped out and re-wired after finding two faults we’ve been living with for six-odd years (that very fortunately didn’t kill us or burn the house down, but were serious enough to need immediate remedial action), and sundry sorting out and cleaning up (likely to continue for a couple of months as construction and repairs wind down).  My ass is whupped, as my Southern friends put it.  My brain may feel like it’s still 21, but my mid-’60’s kinda-crippled, post-heart-attack body disagrees!  With all that going on, I haven’t had time to transcribe a longer excerpt for this morning.

In my copious (?!?) spare time, I’ve been dipping into James Sullivan’s book “Unsinkable:  Five Men and the Indomitable Run of the USS Plunkett“. 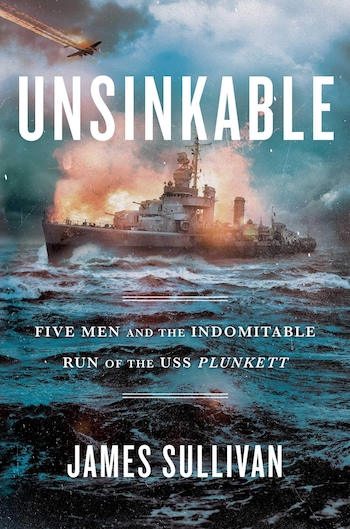 In the bestselling tradition of Indianapolis and In Harm’s Way comes a “captivating… gripping” account of the USS Plunkett—a US Navy destroyer that sustained the most harrowing attack on any Navy ship by the Germans during World War II, later made famous by John Ford and Herman Wouk.

Unsinkable traces the individual journeys of five men on one ship from Casablanca in North Africa, to Sicily and Salerno in Italy and then on to Plunkett’s defining moment at Anzio, where a dozen-odd German bombers bore down on the ship in an assault so savage, so prolonged, and so deadly that one Navy commander was hard-pressed to think of another destroyer that had endured what Plunkett had. After a three-month overhaul and with a reputation rising as the “fightin’est ship” in the Navy, Plunkett (DD-431) plunged back into the war at Omaha Beach on D-Day, and again into battle during the invasion of Southern France—perhaps the only Navy ship to participate in every Allied invasion in the European theatre.

Featuring five incredibly brave men—the indomitable skipper, who will receive the Navy Cross; the gunnery officer, who bucks the captain every step of the way to Anzio; a first lieutenant, who’s desperate to get off the ship and into the Pacific; a seventeen-year-old water tender, who’s trying to hold onto his hometown girl against all odds, and another water tender, who mans a 20mm gun when under aerial assault—the dramatic story of each plays out on the decks of the Plunkett as the ship’s story escalates on the stage of the Mediterranean. Based on Navy logs, war diaries, action reports, letters, journals, memoirs, and dozens of interviews with the men who were on the ship and their families, Unsinkable is a timeless evocation of young men stepping up to the defining experience of their lives.

It’s an interesting, well-written book, following the minutiae of daily life for a select group of shipmates, showing the war and their lives together through five different sets of eyes.  I’m enjoying it – when, that is, I find time to read a few more pages!

The excerpt I’m going to use made me laugh out loud.  I’m sure many current and former service personnel will have met someone like this from time to time.

At mess one day, Jim had started to work on a side of black-eyed peas when he noticed the black eyes moving.  No one else noticed anything, and he wondered at the dimwittedness of his mates.  Recently, he’d been the one to discover that the engineering compartment was infested with bedbugs;  everyone else just figured they were itchy.  Jim took his tray in to George Schwartz and pointed out the weevils.  George shut down the mess line and called in Dutch Heissler to look at the bottom of his barrel.  They were scraping it.

On Jack Simpson’s orders, the ship’s paymaster gave Dutch money for provisions, and he ambled away with a detachment of men from one of Jack’s repair parties.  Even as Jack authorized the foraging expedition, he didn’t have a good feeling about the outcome.  Dutch could work wonders on a provisioning run to a supply depot, or the Liberty ships.  He could wheel and deal with peers on other cans who’d just topped off and the chockablock freighters that had plenty of everything.  The crew loved Dutch for this, and because he was the kind of man who’d stay up all night with the cooks to bake bread, not because he had to but because he was vested in the stores he procured, as well as the men he fed:  he wanted it done right.  But Dutch was also a tattooed hard-ass who went toe to toe with Burke on the fantail [i.e. sparring matches with the ship’s commanding officer], who cheated at cards and craps, and who could drink himself into oblivion, and Jack wondered whether it’d be the good Dutch out there on the island of Sicily, or the mercurial Dutch, operating out there without any decent restraint.  It was both.

Long after Dutch was due back, he was not back.  There weren’t any Germans on Sicily.  The last of eighty-eight thousand fighters had been spirited off the island while Plunkett was shelling Gioia Tauro, concluding a mass evacuation the likes of which had not been achieved since Dunkirk.  But there were plenty of Sicilians left on Sicily, and that was the problem.  Standing on a wing of the bridge, Jack Simpson heard the sounds of the returning repair party from a distance, heard songs in Italian, for some of the men who’d gone out with Dutch could speak Italian and those who couldn’t by now thought they could.  When Plunkett finally did see them, they also saw wheeled wooden carts filled with food, and in one or two of the carts, a couple of the ship’s men too drunk to walk.

At the gangplank, in a voice thickened by wine, Dutch called up to report that they’d had some success.  They’d secured food, and they’d managed to do so without having to expend any of the ship’s money.  The Sicilians had greeted them as liberators and wouldn’t let them pay for anything.

Jack’s Dead End Kids, reeling with the same Sicilian vintage, started hustling their provisions up the gangplank.  One of the Kids tottered off the side and plunged into the drink.  Someone dead-panned the obvious, “Man overboard”, and the splashed sailor’s voice billowed up from below, small, happy, and oblivious:  “Where is he?  I’ll get him while I’m down here.”