The late, great Henry Louis Mencken was a newspaper columnist, satirist and astute observer of life.  His biting, acerbic wit got him into trouble with two Presidents, costing him his newspaper column on both occasions, but he remained unafraid and steadfast in his commitment to skewer the powerful and point out what he saw as the truth of the situation.  His humorous analysis of American life has ensured that his words will outlive all of us.

In 1920 Mencken wrote a column in the Baltimore Evening Sun titled “Bayard vs. Lionheart”, commenting on the Presidential election being fought out between Warren G. Harding (Republican, and the eventual winner) and James M. Cox (Democrat).  The column was later published in his collection “On Politics: A Carnival of Buncombe“. 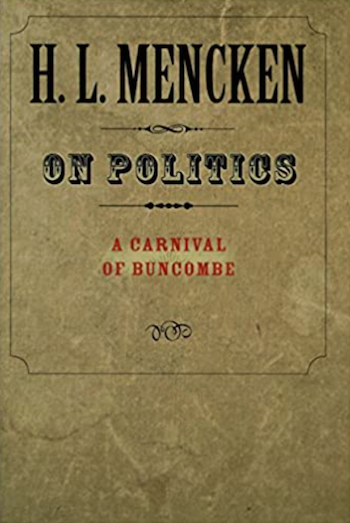 I thought his reflections on a century-old Presidential election might give us food for thought this year:  so here’s that column in full, from July 26th, 1920.

One discerns in all the current discussion of MM. Harding and Cox a certain sour dismay. It seems to be quite impossible for any wholly literate man to pump up any genuine enthusiasm for either of them. Each, of course, is praised lavishly by the professional politicians of his own party, and compared to Lincoln, Jefferson and Cleveland by the surviving hacks of the party press, but in the middle ground, among men who care less for party success than for the national dignity, there is a gone feeling in the stomach, with shooting pains down the legs. The Liberals, in particular, seem to be suffering badly. They discover that Harding is simply a third-rate political wheel-horse, with the face of a moving-picture actor, the intelligence of a respectable agricultural implement dealer, and the imagination of a lodge joiner, and that Cox is no more than a provincial David Harum with a gift for bamboozling the boobs.

These verdicts, it seems to me, are substantially just. No one but an idiot would argue seriously that either candidate is a first-rate man, or even a creditable specimen of second-rate man. Any State in the Union, at least above the Potomac, could produce a thousand men quite as good, and many States could produce a thousand a great deal better. Harding, intellectually, seems to be merely a benign blank—a decent, harmless, laborious, hollow-headed mediocrity perhaps comparable to the late Harrington, of Maryland. Cox is quicker of wit, but a good deal less honest. He belongs to the cunning type; there is a touch of the shyster in him. His chicaneries in the matter of prohibition, both during the convention and since, show the kink in his mind. He is willing to do anything to cadge votes, and he includes in that anything the ready sacrifices of his good faith, of the national welfare, and of the hopes and confidence of those who honestly support him. Neither candidate reveals the slightest dignity of conviction. Neither cares a hoot for any discernible principle. Neither, in any intelligible sense, is a man of honor.

But it is one thing to yield to virtuous indignation against such individuals and quite another thing to devise any practicable scheme for booting them out of the synagogue. The weakness of those of us who take a gaudy satisfaction in our ideas, and battle for them violently, and face punishment for them willingly and even proudly, is that we forget the primary business of the man in politics, which is the snatching and safeguarding of his job. That business, it must be plain, concerns itself only occasionally with the defense and propagation of ideas, and even then it must confine itself to those that, to a reflective man, must usually appear to be insane. The first and last aim of the politician is to get votes, and the safest of all ways to get votes is to appear to the plain man to be a plain man like himself, which is to say, to appear to him to be happily free from any heretical treason to the body of accepted platitudes-to be filled to the brim with the flabby, banal, childish notions that challenge no prejudice and lay no burden of examination upon the mind.

It is not often, in these later days of the democratic enlightenment, that positive merit lands a man in elective office in the United States; much more often it is a negative merit that gets him there. That negative merit is simply disvulnerability. Of the two candidates, that one wins who least arouses the suspicions and distrusts of the great masses of simple men. Well, what are more likely to arouse those suspicions and distrusts than ideas, convictions, principles? The plain people are not hostile to shysterism, save it be gross and unsuccessful. They admire a Roosevelt for his bold stratagems and duplicities, his sacrifice of faith and principle to the main chance, his magnificent disdain of fairness and honor. But they shy instantly and inevitably from the man who comes before them with notions that they cannot immediately translate into terms of their everyday delusions; they fear the novel idea, and particularly the revolutionary idea, as they fear the devil. When Roosevelt, losing hold upon his cunning at last, embraced the vast hodgepodge of innovations, some idiotic but some sound enough, that went by the name of Progressivism, they jumped from under him in trembling, and he came down with a thump that left him on his back until death delivered him from all hope and caring.

It seems to me that this fear of ideas is a peculiarly democratic phenomenon, and that it is nowhere so horribly apparent as in the United States, perhaps the nearest approach to an actual democracy yet seen in the world. It was Americans who invented the curious doctrine that there is a body of doctrine in every department of thought that every good citizen is in duty bound to accept and cherish; it was Americans who invented the right-thinker. The fundamental concept, of course, was not original. The theologians embraced it centuries ago, and continue to embrace it to this day. It appeared on the political side in the Middle Ages, and survived in Russia into our time. But it is only in the United States that it has been extended to all departments of thought. It is only here that any novel idea, in any field of human relations, carries with it a burden of obnoxiousness, and is instantly challenged as mysteriously immoral by the great masses of right-thinking men. It is only here, so far as I have been able to make out, that there is a right way and a wrong way to think about the beverages one drinks with one’s meals, and the way children ought to be taught in the schools, and the manner in which foreign alliances should be negotiated, and what ought to be done about the Bolsheviki.

In the face of this singular passion for conformity, this dread of novelty and originality, it is obvious that the man of vigorous mind and stout convictions is gradually shouldered out of public life. He may slide into office once or twice, but soon or late he is bound to be held up, examined and incontinently kicked out. This leaves the field to the intellectual jelly-fish and inner tubes. There is room for two sorts of them—first, the blank cartridge who has no convictions at all and is willing to accept anything to make votes, and, secondly, the mountebank who is willing to conceal and disguise what he actually believes, according as the wind blows hot or cold. Of the first sort, Harding is an excellent specimen; of the second sort, Cox.

Such tests arise inevitably out of democracy—the domination of unreflective and timorous men, moved in vast herds by mob emotions. In private life no man of sense would think of applying them. We do not estimate the integrity and ability of an acquaintance by his flabby willingness to accept our ideas; we estimate him by the honesty and effectiveness with which he maintains his own. All of us, if we are of reflective habit, like and admire men whose fundamental beliefs differ radically from our own. But when a candidate for public office faces the voters he does not face men of sense; he faces a mob of men whose chief distinguishing mark is the fact that they are quite incapable of weighing ideas, or even of comprehending any save the most elemental—men whose whole thinking is done in terms of emotion, and whose dominant emotion is dread of what they cannot understand. So confronted, the candidate must either bark with the pack, or count himself lost. His one aim is to disarm suspicion, to arouse confidence in his orthodoxy, to avoid challenge. If he is a man of convictions, of enthusiasm, of self-respect, it is cruelly hard. But if he is, like Harding, a numskull like the idiots he faces, or, like Cox, a pliant intellectual Jenkins, it is easy.

The larger the mob, the harder the test. In small areas, before small electorates, a first-rate man occasionally fights his way through, carrying even the mob with him by the force of his personality. But when the field is nationwide, and the fight must be waged chiefly at second and third hand, and the force of personality cannot so readily make itself felt, then all the odds are on the man who is, intrinsically, the most devious and mediocre—the man who can most adeptly disperse the notion that his mind is a virtual vacuum.

The Presidency tends, year by year, to go to such men. As democracy is perfected, the office represents, more and more closely, the inner soul of the people. We move toward a lofty ideal. On some great and glorious day the plain folks of the land will reach their heart’s desire at last, and the White House will be adorned by a downright moron.

Not a comforting essay, is it? – but I suspect there’s more than a little truth in it.