I mentioned earlier this week that Cedar Sanderson’s hunting anthology “How Not to Shoot Fish, and Other Deer that Got Away” has just been published. 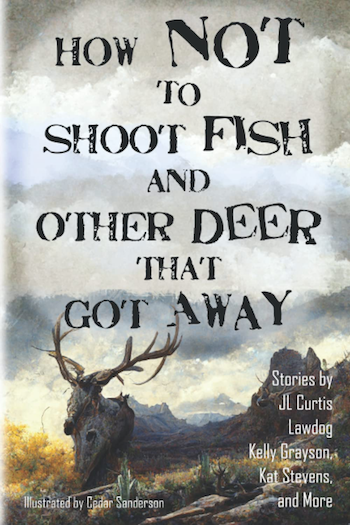 I have a story in this anthology.  It’s one I told more than a decade ago in these pages, so I’m sure most of you won’t remember it.  I thought it might make a nice Saturday Snippet to help publicize Cedar’s new book.  It’s already achieved #1 Best Seller rank in its category, which is very good news for all the contributors.

HOW (NOT) TO HUNT THE SKUNK

In 2003 I was living in North-Central Louisiana.  It was interesting, because the local wildlife was convinced that they own the neighborhood. Humans were just intruders on their territory. I had an armadillo nest underneath my house at one time, and other wildlife tried to do the same thing at frequent intervals.

A family on my street had seen skunks wandering around and warned me to keep an eye out (my house, like theirs, had a crawl-space underneath, and we both used wire and other barriers to stop animals getting in). One Saturday morning they detected sounds of movement beneath the kitchen and an interesting smell was in the air. Dad checked underneath with a flashlight and found that two skunks had moved in.

He went out that afternoon to talk to a nearby zoo about removing them (they do a lot of that sort of thing). Unfortunately (!) his teenage son decided he’d show Dad that he was able to handle the problem. He duly took Dad’s .22 caliber rifle, lay down next to the house, inserted the rifle through the hole in the wire netting through which the skunks had entered, pushed his head and right arm and shoulder in through the hole, lined up the sights and let fly in the skunks’ general direction.

Not only did he miss the skunks, he blew a hole in the water pipe leading to the hot-water supply. Water began to spray all over. To add insult to injury the skunks apparently didn’t like the noise and sudden shower. Both of them let fly in the direction of the shooter, scoring simultaneous direct hits. The boy was, of course, unable to back out of the way in a hurry, having got hung up on the wire around the crawl-space.

Dad came home to find his son sitting on the front porch with the door and all windows firmly locked; his wife and a plumber trying to sort out the water leak; and half the neighborhood (including yours truly) gathered round making helpful suggestions about how to wash skunk smell out of the boy’s hair (to say nothing of his clothes and the rest of his body). The son’s girlfriend, with whom he had a “hot date” scheduled for that night, arrived soon afterwards. She took one whiff of his ‘eau de col-ugh!-ne’ and informed him that she’d changed her mind!

When I went out for supper that night Dad was planning on buying several catering-size tins of tomato paste and forcibly bathing his son in a tin tub in the back yard. This was a good idea in theory, but was shot down by the fact that the water supply was still switched off until the plumber could repair the pipe! His wife informed him that it would be a divorce matter if ‘his’ son came back in the house smelling like that.

I came back that evening to find the family gone. The plumber had refused point-blank to get under the house to repair the pipe until the ghastly smell had been removed. Since no-one could figure out how to get rid of it without running water, the family spent the night in a motel – all except their teenage son, who was banished to the back of their pickup truck (which had a camper shell), with a sleeping-bag. He was eventually able to scrub down with tomato paste under a tap at the rear of the motel, but judging by my nose was still in need of treatment the following morning.

The family spent the next day trying to remove skunk odor from under the house with the aid of hoses from their neighbors. They went through eleven large spray bottles of Febreze: one on their son, seven under the house (interspersed with copious amounts of hose water) and three indoors on their floors and furniture, which had become permeated with Eau de Skunk. The under-house treatment allowed the plumber to get under the floor later that afternoon and replace the shot pipe.

Their son was at last allowed back in the house, but he lost his shooting privileges, allowance and a few other things for the next year (and boy, did he feel sorry for himself! – but he had the grace to admit that he deserved it). His girlfriend allowed him to take her out the following weekend, but she warned him in advance that he’d better be smelling like a rose!

And the skunks? They disappeared during all the fuss and weren’t seen again. They were probably rather miffed at having their cozy romantic nest disturbed like that. Who invited these noisy people into their neighborhood, anyway?

There you have it.  A less-than-successful hunting story that nevertheless entertains hugely.  What’s not to like?