While writing several blog articles over the past week or two about the current riots in many US cities, I was led to a book by Bryan Burrough titled “Days of Rage“. 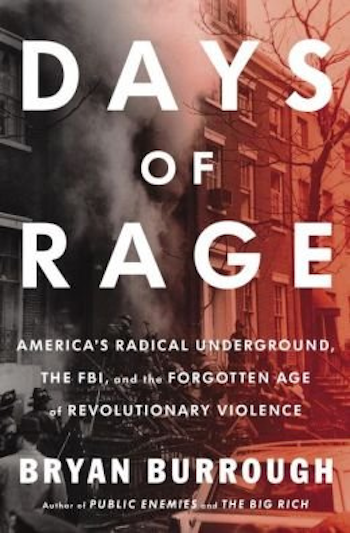 It describes the urban terrorism that flourished in this country during the 1970’s.  I wasn’t aware that things had been that bad, as I wasn’t in this country at the time (I came to America in the late 1990’s).

Reading Mr. Burrough’s book has been eye-opening.  In a sense, the urban unrest we’re seeing today is merely the 1960’s and 1970’s redux, although on a larger scale with more people – not surprising, as the US population is considerably larger today.  The left-wing activists and extremists of that earlier period went on to become university lecturers and professors.  They took advantage of their positions to drip their ideological poison into the minds of our young people.  Inevitably, it’s now manifest on our streets once again.

Here’s a passage from the introduction to “Days of Rage”.

Imagine if this happened today: Hundreds of young Americans—white, black, and Hispanic—disappear from their everyday lives and secretly form urban guerrilla groups. Dedicated to confronting the government and righting society’s wrongs, they smuggle bombs into skyscrapers and federal buildings and detonate them from coast to coast. They strike inside the Pentagon, inside the U.S. Capitol, at a courthouse in Boston, at dozens of multinational corporations, at a Wall Street restaurant packed with lunchtime diners. People die. They rob banks, dozens of them, launch raids on National Guard arsenals, and assassinate policemen, in New York, in San Francisco, in Atlanta. There are deadly shoot-outs and daring jailbreaks, illegal government break-ins and a scandal in Washington.

This was a slice of America during the tumultuous 1970s, a decade when self-styled radical “revolutionaries” formed something unique in postcolonial U.S. history: an underground resistance movement. Given little credibility by the press, all but ignored by historians, their bombings and robberies and shoot-outs stretched from Seattle to Miami, from Los Angeles to Maine. And even if the movement’s goals were patently unachievable and its members little more than onetime student leftists who clung to utopian dreams of the 1960s, this in no way diminished the intensity of the shadowy conflict that few in America understood at the time and even fewer remember clearly today.

In fact, the most startling thing about the 1970s-era underground is how thoroughly it has been forgotten. “People always ask why I did what I did, and I tell them I was a soldier in a war,” recalls a heralded black militant named Sekou Odinga, who remained underground from 1969 until his capture in 1981. “And they always say, ‘What war?’ ”

Call it war or something else, but it was real, and it was deadly. Arrayed against the government were a half-dozen significant underground groups—and many more that yearned to be—which, while notionally independent of one another, often shared members, tactics, and attorneys. Of these, only the Weather Underground, the first and by far the largest, has earned any real analysis. The Symbionese Liberation Army, a ragtag collection of California ex-cons and radicals who pulled off the underground’s most infamous action, the kidnapping of newspaper heiress Patricia Hearst in 1974, was widely dismissed as a pack of loonies. Many doubted that the Black Liberation Army, a murderous offspring of the Black Panthers, even existed. A Puerto Rican independence group known as the FALN, the most determined bombers in U.S. history, remains cloaked in secrecy to this day; not one of its members has ever spoken a meaningful word about its operations. The United Freedom Front, a revolutionary cell consisting of three blue-collar couples and their nine children, robbed banks and bombed buildings well into the 1980s. An interracial group of radicals called the Family did much the same, yet remained so obscure that no one even knew it existed until a fateful afternoon in 1981 when an armored-car robbery went badly awry, three people died, and America was reintroduced to a movement it had assumed dead years before.

This was strange, even at the time. Because radical violence was so deeply woven into the fabric of 1970s America that many citizens, especially in New York and other hard-hit cities, accepted it as part of daily life. As one New Yorker sniffed to the New York Post after an FALN attack in 1977, “Oh, another bombing? Who is it this time?” It’s a difficult attitude to comprehend in a post-9/11 world, when even the smallest pipe bomb draws the attention of hundreds of federal agents and journalists.

“People have completely forgotten that in 1972 we had over nineteen hundred domestic bombings in the United States,” notes a retired FBI agent, Max Noel. “People don’t want to listen to that. They can’t believe it. One bombing now and everyone gets excited. In 1972? It was every day. Buildings getting bombed, policemen getting killed. It was commonplace.”

There are crucial distinctions, however, between public attitudes toward bombings during the 1970s and those today. In the past twenty-five years terrorist bombs have claimed thousands of American lives, over three thousand on 9/11 alone. Bombings today often mean someone dies. The underground bombings of the 1970s were far more widespread and far less lethal. During an eighteen-month period in 1971 and 1972, the FBI reported more than 2,500 bombings on U.S. soil, nearly 5 a day. Yet less than 1 percent of the 1970s-era bombings led to a fatality; the single deadliest radical-underground attack of the decade killed four people. Most bombings were followed by communiqués denouncing some aspect of the American condition; bombs basically functioned as exploding press releases. The sheer number of attacks led to a grudging public resignation. Unless someone was killed, press accounts rarely carried any expression of outrage. In fact, as hard as it may be to comprehend today, there was a moment during the early 1970s when bombings were viewed by many Americans as a semilegitimate means of protest. In the minds of others, they amounted to little more than a public nuisance.

Consider what happened when an obscure Puerto Rican group, MIRA, detonated bombs in two Bronx theaters in New York on May 1, 1970. Eleven people suffered minor injuries when one device went off at the Dale Theater during a showing of Cactus Flower. The second exploded beneath a seat at the cavernous Loew’s Paradise while a rapt audience watched The Liberation of L.B. Jones; when police ordered everyone to leave, the audience angrily refused, demanding to see the rest of the movie. When the theater was forcibly cleared, an NYPD official said later, the audience “about tore the place apart.”1 Neither the bombings nor the Paradise audience’s reaction was deemed especially newsworthy; the incident drew barely six paragraphs in the New York Times.

The public, by and large, dismissed the radical underground as a lunatic fringe, and in time that’s what it became. But before that day, before so many fell victim to despair or drugs or the FBI, there was a moment when the radical underground seemed to pose a legitimate threat to national security, when its political “actions” merited the front page of the New York Times and the cover of Time magazine and drew constant attention from the White House, the FBI, and the CIA. To the extreme reaches of the radical left, to those who dared to believe that some sort of second American Revolution was actually imminent, these years constituted a brief shining moment, perhaps its last. To others, the bombings were nothing more than homegrown terrorism; the excesses of the radical left during the 1970s helped nudge America toward the right end of the political spectrum and into the arms of Ronald Reagan and the conservatives. But in the eyes of much of mainstream America, to ordinary working people in Iowa and Nevada and Arkansas who hadn’t the time or the inclination to study the communiqués of bomb-throwing Marxists, who wanted only to return to normalcy after long years of disorienting change, it was insanity.

In the end, the untold story of the underground era, stretching from 1970 until the last diehards were captured in 1985, is one of misplaced idealism, naïveté, and stunning arrogance. Depending on one’s point of view, its protagonists can be seen as either deluded dreamers or heartless terrorists, though a third possibility might be closer to the truth: young people who fatally misjudged America’s political winds and found themselves trapped in an unwinnable struggle they were too proud or stubborn to give up. This book is intended to be a straightforward narrative history of the period and its people. Any writer makes judgments, but I have tried to keep mine to a minimum, especially where politics is concerned.

It is ultimately a tragic tale, defined by one unavoidable irony: that so many idealistic young Americans, passionately committed to creating a better world for themselves and those less fortunate, believed they had to kill people to do it. The story is long and labyrinthine, alternately exciting and sad, and it all begins, in a way, with a tortured couple living in New York’s East Village in the summer of 1969. They were like so many in the faltering protest movement at that restive decade’s end: long-haired, free-spirited, and mired in gloom. The one thing that set them apart from friends who raised their fists and chanted antiwar slogans in demonstrations of the day was that late one night, after removing a carton of cottage cheese, a quart of yogurt, and some leftover salad from their refrigerator, they replaced it all with a hundred bright red sticks of dynamite.

The nation got over its earlier “Days of Rage” in due course, and went on to chart a more peaceful course into the future.  One hopes we can do the same again.