Last year I published a Saturday Snippet from Adam Fergusson’s excellent book “When Money Dies: The Nightmare of Deficit Spending, Devaluation, and Hyperinflation in Weimar Germany“. 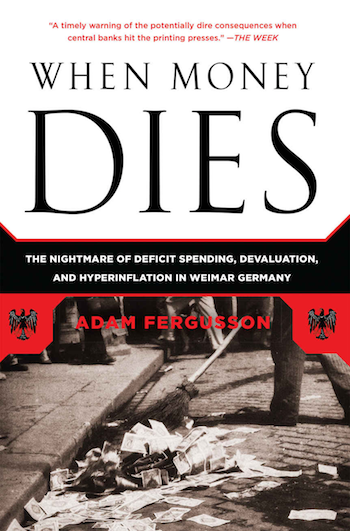 It’s an excellent book, and I highly recommend it to your attention.

Given the very real threat of hyperinflation in the USA, as discussed yesterday in these pages, I thought I’d bring you another excerpt from that book, this time from its conclusion, summarizing some of the lessons learned from that economic and fiscal catastrophe.  It’s not inevitable, but it is certainly not impossible, that we may see something similar in our own country in the not too distant future, if our political and economic powers that be don’t pull out their joint and several fingers and do something constructive to solve our present multiple economic crises.  I’ve highlighted a few key sentences and phrases in bold, underlined text.

How great does inflation have to be before a government can no longer control it? Most economists accept that mild inflation has certain therapeutic advantages for a nation which must deal with the social and economic problems to which industrial democracies are usually subject. Most electorates still accept the statements of their politicians’ pious intentions in regard to controlling ever rising prices: and yet the Deutschmark, the currency of the country which had most reason to fear inflation, lost two-thirds of its purchasing power between 1948 and 1975. The pound lost almost half its purchasing power between 1970 and 1975. In neither instance, however, did such depreciation represent a deliberate, cynical policy; which, no doubt, would also have been claimed by the German bankers and governments of the early 1920s, who looked for causes of their monetary difficulties beyond their own printing press and tax system – and found them, without difficulty and to their complete intellectual satisfaction. It remains so that once an inflation is well under way (as Schmölders has it) ‘it develops a powerful lobby that has no interest in rational arguments’. This was as true for Austria and Hungary as for Germany.

There was no moment in Germany between 1914 and the summer of 1923 when in theory currency stability could not have been secured, if necessary by the establishment of a new bank of issue for which sufficient backing was still available. Until the later date, despite the demands made by the Entente and the necessity to find substitutes for the Ruhr’s iron and coal, German gold and foreign currency reserves always constituted a substantial proportion of the exchange value of the circulating paper, no matter how fantastically its volume grew. After the war was over, however, there were always practical difficulties which had little to do with the refusal of Germany’s monetary authorities to see the connection between depreciation and money supply.

Long before the Ruhr invasion, and perhaps even before the preliminary meetings of the Reparations Commission, there came a stage when it was politically impossible to halt inflation. In the middle of 1920, after the brief post-Kapp Putsch period of the mark’s stability, the competitiveness of German exports declined, with unemployment beginning to build up as a result. The point was presumably not lost on the inflators. Recovery of the mark could not be achieved without immediate repercussions in terms of bankruptcies, redundancies, short-time working, unemployment, strikes, hunger, demonstrations, Communist agitation, violence, the collapse of civil order, and thus (so it was believed) insurrection and revolution itself.

Much as it may have been recognised that stability would have to be arranged some day, and that the greater the delay the harder it would be, there never seemed to be a good time to invite trouble of that order. Day by day through 1920, 1921 and 1922 the reckoning was postponed, the more (not the less) readily as the prospective consequences of inflation became more frightening. The conflicting objectives of avoiding unemployment and avoiding insolvency ceased at last to conflict when Germany had both.

The longer the delay, the more savage the cure. Austria by the end of 1922 was in the hands of the receivers, having regained a stable currency only under the absolute direction of a foreigner. Hungary, too, had passed any chance of self-redemption, and later on was to undergo an equal degree of hardship and suffering, especially for her public servants. Stability returned to Germany under a military dictatorship when much of the constitution had been suspended – although the State of Emergency was only indirectly necessitated by the destruction of the nation’s finances. To all three countries stability and then recovery came. All had to be bailed out by others. Each was obliged to accept a greater degree of economic disruption and unemployment than need ever have been feared at the time when the excessive printing of banknotes might still have been stopped. In all three cases, after inflation reached a certain advanced stage, financial and economic disaster seems to have been a prerequisite of recovery.

The take-off point in the inflationary progress, after which the advent of hyperinflation was but a matter of time, the point indeed when it became self-generating and politically irreducible except for short periods, was not indeed to be found on the graph of the currency depreciation, or of the velocity of its circulation, or of the balance of payments deficit. Nor in Germany’s case did it notably coincide with some ultimate crisis of confidence in the mark, at home or abroad – Rathenau’s murder, or the occupation of the Rhine ports, or the London Ultimatum, all of which had immediate seismic effects upon it. Rather it lay on the falling curve of political possibility, with which was closely linked the degree of political power and courage that the government, sorely pressed as it was, was able to muster.

What really broke Germany was the constant taking of the soft political option in respect of money. The take-off point therefore was not a financial but a moral one; and the political excuse was despicable, for no imaginable political circumstances could have been more unsuited to the imposition of a new financial order than those pertaining in November 1923, when inflation was no longer an option. The Rentenmark was itself hardly more than an expedient then, and could scarcely have been introduced successfully had not the mark lost its entire meaning. Stability came only when the abyss had been plumbed, when the credible mark could fall no more, when everything that four years of financial cowardice, wrong-headedness and mismanagement had been fashioned to avoid had in fact taken place, when the inconceivable had ineluctably arrived.

Money is no more than a medium of exchange. Only when it has a value acknowledged by more than one person can it be so used. The more general the acknowledgement, the more useful it is. Once no one acknowledged it, the Germans learnt, their paper money had no value or use – save for papering walls or making darts. The discovery which shattered their society was that the traditional repository of purchasing power had disappeared, and that there was no means left of measuring the worth of anything. For many, life became an obsessional search for Sachverte, things of ‘real’, constant value: Stinnes bought his factories, mines, newspapers. The meanest railway worker bought gewgaws. For most, degree of necessity became the sole criterion of value, the basis of everything from barter to behaviour. Man’s values became animal values. Contrary to any philosophic assumption, it was not a salutary experience.

What is precious is that which sustains life. When life is secure, society acknowledges the value of luxuries, those objects, materials, services or enjoyments, civilised or merely extravagant, without which life can proceed perfectly well but which make it much pleasanter notwithstanding. When life is insecure, or conditions are harsh, values change. Without warmth, without a roof, without adequate clothes, it may be difficult to sustain life for more than a few weeks. Without food, life can be shorter still. At the top of the scale, the most valuable commodities are perhaps water and, most precious of all, air, in whose absence life will last only a matter of minutes. For the destitute in Germany and Austria whose money had no exchange value left existence came very near these metaphysical conceptions. It had been so in the war. In All Quiet on the Western Front, Müller died ‘and bequeathed me his boots – the same that he once inherited from Kemmerick. I wear them, for they fit me quite well. After me Tjaden will get them: I have promised them to him.’

In war, boots; in flight, a place in a boat or a seat on a lorry may be the most vital thing in the world, more desirable than untold millions. In hyperinflation, a kilo of potatoes was worth, to some, more than the family silver; a side of pork more than the grand piano. A prostitute in the family was better than an infant corpse; theft was preferable to starvation; warmth was finer than honour, clothing more essential than democracy, food more needed than freedom.

And what about the political consequences of hyperinflation in Germany?  Earlier in the same chapter, Mr. Fergusson opines:

To say that inflation caused Hitler, or by extension that a similar inflation elsewhere than in a Weimar Germany could produce other Right- or Left-wing dictatorships, is to wander into quagmires of irrelevant historical analogy. The comparable, coincidental, financial and social circumstances of Austria and Hungary do not, in any case, support such a notion, telling in other matters as are some of the parallels which may be found. On the other hand, the vast unemployment of the early 1930s gave Hitler the votes he needed. Just as the scale of that unemployment was part of the economic progression originating in the excesses of the inflationary years, so the considerable successes of the Nazi party immediately after stabilisation and immediately before the recession were linked … with its advances in 1922 and 1923.

It is indisputable that in those inflationary years Hitler felt his political strength as a national figure and first tried his fingers for size on the throat of German democracy. Indeed, as Mr Clive perceptively reported, ‘In the course of 1923 he succeeded in rousing more passions and stirring up more bad blood than far greater men than he have done in a lifetime.’ The Consul-General might with justification have added that Hitler should go far. Germany only needed a new dose of economic misfortune for the Nazis to seize power, quasi-constitutionally, the second time round.

Inflation did not conjure up Hitler, any more than he, as it happened, conjured it. But it made Hitler possible.

As we face the reality of widespread unemployment, the prospect of high inflation,  and possibly hyperinflation in this country, it would be well to remember that such economic conditions can pave the way for tyranny and the destruction of democracy.  They have in the past – and not just in Germany, either.  There’s no reason why they cannot do so again.

Grim thoughts for a Saturday morning . . . but thoughts we should be thinking now, and potential dangers we should be preparing to face in our own future.  God grant it won’t come to that!