Two headlines caught my eye during the past week.  Both make me sad, angry and depressed about the once-great institution known as the Catholic Church.  Long-term readers will know why:  for those who don’t, see the articles in the sidebar on the subject, particularly this one.

The first report, from the BBC, discusses the ongoing scandal in the Diocese of Buffalo, NY.

The lawsuit, which included a 218-page report on the two-year investigation into the diocese, alleges that though leaders found sex abuse complaints to be credible, they protected the accused.

They also failed to properly supervise or monitor these priests, the lawsuit claims.

By instead marking them as “unassignable”, the accused were able to retire or take leave, while receiving benefits, rather than being potentially removed from the clergy by the Vatican.

They are accused of violating nonprofit and estate, powers and trusts laws.

The state report says in a number of instances, priests were allowed to remain in ministry or falsely classified as retired, on medical leave or sabbatical when they were in fact removed over allegations of abuse.

One priest was allowed to remain in ministry out of state even after the diocese learned of eight alleged sexual abuse cases involving young girls, the report states.

Another who was found by the church to have groomed a minor and “engaged in inappropriate sexual misconduct with adults” was also allowed to remain.

Other priests in the diocese were accused of other abuses, including taking minors to see pornographic movies, discussing inappropriate topics, and molesting young girls and altar boys.

There’s (unfortunately) more at the link.

Note that both accused bishops resigned or retired only within the last year.  In other words, though the extent of this scandal in the wider Church has been publicly exposed for almost two decades, both are alleged to have continued the cover-up as if nothing had happened.  They appear to have assumed they could get away with it forever.

The second report alleges that an attitude of “so what?” appears to be a lot more common among Catholic prelates than it should be.  Bold, underlined text is my emphasis.

Anybody who bothers to slog through the Vatican’s mountainous report on the McCarrick scandal will not emerge from the experience enlightened. The report’s revelations, to the extent they exist, are inadvertent. The chief one, evident in the feckless epistolary back-and-forth documented in the report, is that McCarrick would remain an honored cardinal to this day were it not for credible accusations against him involving underage teens. Take those charges away, and he would still be popping up at the Vatican for meetings with the pope. That McCarrick had corrupted countless seminarians and priests by pressuring them into his bed simply didn’t shock churchmen, whose standards seemed considerably lower than those of the pagan world.

The testimony of … McCarrick enablers only serves to highlight the report’s dishonesty. It is a very selective, self-serving, and above all score-settling document. A great deal of it is directed toward refuting former papal nuncio Archbishop Carlo Maria Viganò, who urged the Vatican to cashier McCarrick. But this material isn’t very convincing. Indeed, many of the footnotes in a roundabout way confirm Viganò’s testimony. Did Pope Francis know about McCarrick’s past? Yes. Did he do anything about it? No.

The report, of course, says nothing about the existence of the gay mafia in the Church that elected Pope Francis and that has been receiving plum positions ever since. McCarrick had been part of that bloc. Though he couldn’t vote in the conclave, he acknowledged “talking” Francis up to other prelates. What role that played in the pope’s ginger handling of McCarrick naturally goes unaddressed.

The impression left by all the excuse-making for McCarrick (with some bishops pretending that his sleeping with seminarians was non-sexual) is that of a hopelessly decayed bureaucracy, utterly indifferent to holiness or orthodoxy.

But what does all of this faux-transparency add up to? Nothing. Not a single one of McCarrick’s “nephews” — from Cardinal Cupich in Chicago (his honoring of McCarrick goes unmentioned in the report) to Cardinal Tobin in Newark — has been stripped of any power. If anything, they have gained some since McCarrick’s defrocking … McCarrick is gone, but his influence remains, even extending through Farrell to the next pope. Don’t be surprised if that future pope is a McCarrick crony, too.

Let me highlight one sentence from that news report.  It’s the true heart of the matter.

The impression … is that of a hopelessly decayed bureaucracy, utterly indifferent to holiness or orthodoxy.

Tragically, I couldn’t have put it better myself.

There are undoubtedly some good, Godly bishops in the Catholic Church, but they appear to be far from the actual corridors of power – the senior bishoprics and archbishoprics, the Cardinals, the Roman Curia (the bureaucrats who administer the Church worldwide), and those who have the power and authority to make changes.  Those in charge dithered, dissembled and obfuscated all through the clergy sex abuse scandal as it unfolded in the early 2000’s, and it looks very much as if they’re still doing precisely the same thing.  Nothing has changed.

During the ordination of a bishop, the open Book of the Gospels is placed upon the candidate’s head, as a public affirmation and reminder that “the preaching of the Word of God is the pre-eminent obligation of the office of the Bishop”.  Preaching involves far more than words alone.  A famous dictum attributed to St. Francis of Assisi tells us, “Preach the Gospel at all times.  If necessary, use words.”  Another time-honored (albeit secular) maxim tells us that “Actions speak louder than words”.  What do the actions – or inactions – of Catholic bishops in the face of the clergy sex abuse scandal tell us about their fidelity to their “pre-eminent obligation”?

Many faithful Catholics have wept many tears over the way the Catholic Church has (failed to) respond to this crisis.  Sadly, they aren’t in a position to do anything about it as far as the institution is concerned.  As individuals?  Well, some years ago Rod Dreher wrote ‘The Benedict Option‘, to suggest a way for faithful Christians to uphold and live out their beliefs in a post-Christian society. 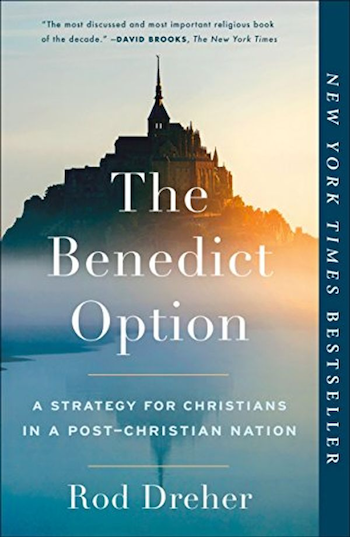 Perhaps we’re going to need the Benedict Option as a way to uphold and live out our beliefs in a post-Christian Catholic Church as well.