Well . . . guess what?  The Pentagon on Thursday finally admitted in a public statement that there are 46 US-funded biolabs in Ukraine.  (Click the image below for a larger view.) 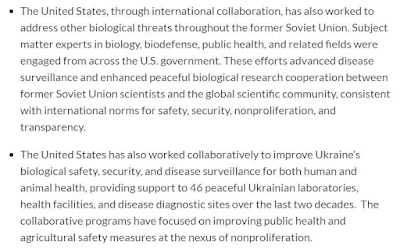 I love (not!) the emphasis on “peaceful” Ukrainian laboratories.  Given that most of them were former Soviet Union biological laboratories, with an emphasis on weaponizing diseases and using them as weapons of war, I find that somewhat less than convincing.  I think the truth was that the USA was analyzing all those former Soviet bioweapons, not just to learn how they worked and how dangerous they might have been, but also to ensure that if push comes to shove in future, this country would know how to create them – and countermeasures to them – as well.

As for funding 46 laboratories . . . ye Gods and little fishes, why so many?  Wouldn’t one or two have been enough?  The sheer number of facilities argues that this wasn’t just common-or-garden academic or medical research.  That’s a proliferation nightmare.  Who was in charge of this effort?  Who was keeping track of all those programs, coordinating their progress and collating their results, and deciding what was important and what not?  Was this just another example of US funds being corruptly used to kick back money to our politicians?  If it wasn’t, how can you prove it with so many rabbit-holes to run down?  It sounds like this whole effort was deliberately designed to make it impossible to keep track of where the money went.  As Sundance has pointed out:

Inside the DC beltway Ukraine is very important, stunningly important, because Ukraine functions as the corrupt money laundry operation for DC politicians to receive taxpayer kickbacks from their financial support into Ukraine.

So, now that we know Ms. Gabbard was telling the truth, and not “parroting false Russian propaganda” or spreading “treasonous lies”, when is Senator Romney going to apologize for making such scurrilous allegations about her?  He claims to be Christian, after all, and that means apologizing and putting things right are a moral obligation upon him, not just optional.  Is his faith more than skin deep, or is he just another amoral politician who doesn’t give a damn about ethics, truth or anything else?

I’ll be watching and listening with more than a little interest to see what he does next . . . but I suspect I’ll be waiting in vain for him to do the right thing.  Based on his track record in the Senate, I fear the truth is not in that man.