The full-frame image of the rocky world was taken at a distance of 3,200 miles (5,200 kilometers). The latest images that go all the way around Vesta are revealing the first surface details of the giant asteroid. 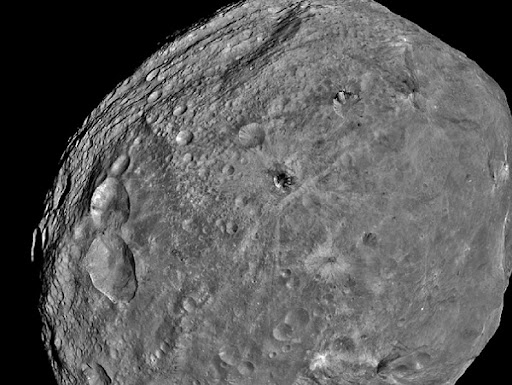 Vesta, the brightest object in the asteroid belt as seen from Earth, turns on its axis once every five hours and 20 minutes. The giant asteroid is also thought to be the source of a large number of meteorites that fall to the blue planet.

“Now that we are in orbit around one of the last unexplored worlds in the inner solar system, we can see that it’s a unique and fascinating place,” said Marc Rayman, Dawn’s chief engineer and mission manager at NASA’s Jet Propulsion Laboratory in Pasadena, Calif.

The Dawn spacecraft will depart for Ceres in July 2012 and will arrive in 2015.

There’s more at the link, including more (and larger) photographs. Essential reading for those interested in our solar system and space travel. You can learn more at NASA’s Dawn mission Web page.