Scientists at the Large Hadron Collider at CERN are experimenting with sub-atomic explosions in an effort to better understand the ‘Big Bang‘ cosmological theory. The Daily Mail reports:

It may look like a firework display in the night sky but these explosive images could be the closest we have yet come to snapshot from the birth of the universe itself. 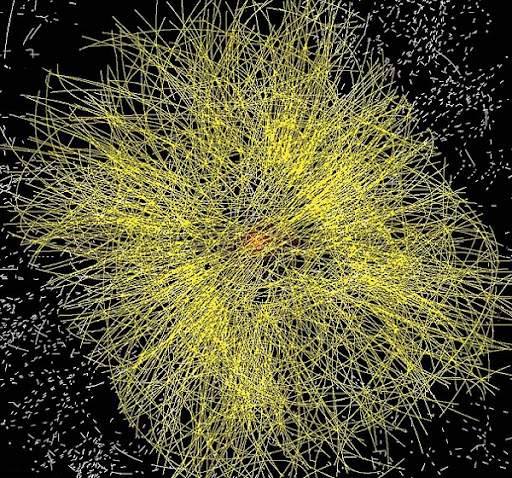 The computer generated images are the result of the ‘big bang’ experiments performed by scientists at CERN, home of the Large Hadron Collider, in Geneva, Switzerland.

In trying to determine exactly how the universe came into existence, scientists have been recreating sub-atomic explosions – like the one that may have happened around the time of the big bang – using atom-sized particles of lead.

They shoot the particles through a 16-mile long accelerator at the speed of light and when the particles collide in a vacuum colder than -271 Celsius, they put on a spectacular show.

Yorkshire-born particle physicist and CERN spokesperson Christine Sutton said: ‘When two lead-ions collide basic particles like pions – one of the basic particles that make up atoms – are expelled.

‘Sub-atomic particles such as these include the basic building blocks of atoms and are common in the universe.

‘So by studying these we can learn more about what the universe is made from and perhaps one day how it all began.

‘We measure what we call tracks – which we look at like animal tracks to trace the presence and movement of particles. 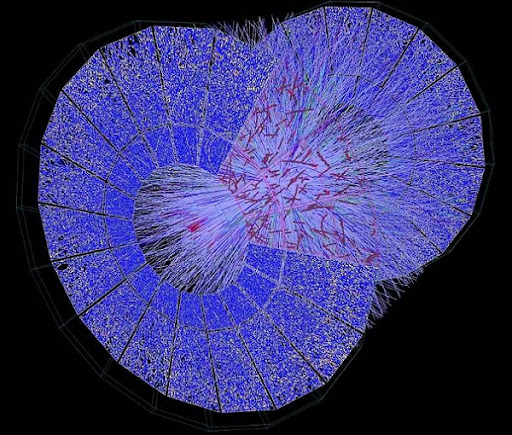 ‘You can’t see the particles themselves but these trails are left behind – like the contrails of an aeroplane.

‘The traces are coloured in by physicists to represent energy, for example.

‘Blue can represent higher energies, red lower ones, like the colours in flames.’

There’s more at the link, including more and larger pictures.

This fascinates me. To think that what the scientists are seeing may be the same processes that shaped and formed the universe as we know it . . . that’s just mind-boggling! I wish I could be there to see it in person.