While everybody on the right of US politics is getting excited about a potential “Red Wave” in November, I’ve been watching the left of US politics.  They don’t appear overly worried or dejected by what they see in opinion polls or media commentary.  In fact, they’re doubling down on their message that it’s all about abortion rather than the economy, or inflation, or President Biden’s catastrophic record in office.

That tells me just one thing.  They think they’re going to win in November, or at least keep losses to a manageable level.  If they’re not worried, it can only be because they have something up their sleeve.

I may be wrong, of course;  but after 2020, I don’t think I am.  Those who manipulated that election are bound and determined that they won’t be called to account for their misdeeds.  There’s simply no way they’re going to sit back and allow the voice of the people to override their political imperatives.

How are they going to do it?  I don’t know . . . but I’m pretty sure it’ll involve some sudden crisis that can be used as an excuse to delay, or postpone, or even cancel the elections.  The explosion of a nuclear weapon in or near Russia or Ukraine?  Some other military provocation, such as a Chinese assault on Taiwan?  Another major terrorist attack inside the USA?  An economic catastrophe of some sort?  It’s anybody’s guess, but I’m sure something is planned.

Sundance notes that in 2018 and 2020, precisely 15 days before each election, the FBI produced evidence of some or other plot to disrupt the elections.  Today, precisely 15 days before this year’s election, they’re doing the same thing, alleging “multiple threats to the nation’s election security infrastructure ahead of the midterms”.  Same old, same old . . . from a visibly and demonstrably corrupt security agency.  I’m far from convinced.

I note, too, that an acolyte of the World Economic Forum, Rishi Sunak, is to become the next Prime Minister of Britain (in a flat-out slap in the face to the regular members of the Conservative Party).  He’s in lockstep with the WEF’s economic policies, and can be expected to enthusiastically propagate their message in Britain and those nations where it has influence.  Britain’s new King, Charles III, is similarly on board with their message.  I can only presume that the WEF and its minions have manipulated Sunak’s selection, and plan to use it to bring Britain back into line with their objectives.  Will Britain rejoin the European Union?  It wouldn’t surprise me, seeing that the WEF controls the EU and all its member nations through the European bureaucracy.

Would the globalist powers like to see the USA remain in lockstep with the same message?  They most certainly would . . . which is yet another reason why I’m not at all sure the voice of the people will prevail in next month’s election.

I truly hope and pray that I’m wrong, and that November’s elections will be free, fair and honest.  However, I doubt that very much.  The state of our electoral systems across the nation gives me no comfort in that regard. 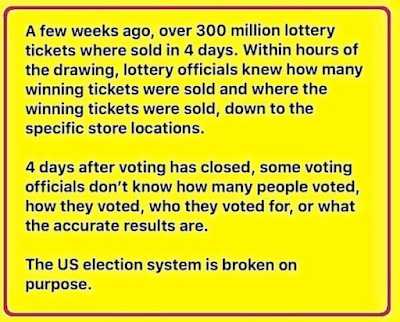