I’ve owned one of Swampfox Optics’ earlier micro reflex sights, the Kingslayer, for some time.  I found it an adequate performer, but not up to the latest technology from top names such as Trijicon and other manufacturers.

That’s all changed with the arrival of Swampfox’s Liberty and Justice models.  They’re right up to date, equal to the best from anyone else, and perform very well indeed.  What’s more, their price is very competitive.  Intrigued, I bought one for testing.  (Note that I bought my own sight from Swampfox, with my own money.  They’re not compensating me in any way, in cash or in kind, for writing this review, and have not asked for any endorsement.  I’m merely sharing my impressions with my readers in the hope that others may find them useful.)

As my eyes get older, I find conventional handgun sights harder and harder to use, because I can’t focus as sharply as I used to.  These micro reflex sights eliminate that difficulty.  They also work well for those unaccustomed to lining up front and rear sights, and focusing sharply on the front sight while the rear sight and the target are slightly out of focus, or “fuzzy”.  That’s a skill some find difficult to learn, but with a reflex sight, it’s unnecessary.

The Liberty and Justice models are essentially identical, with the exception of the window size.  Liberty has a 22mm window (essentially the width of a Glock slide), while Justice offers a larger 27mm.  The former is easier to conceal when carrying your pistol, while the latter is more useful in competition or hunting, where you want to acquire the dot of the sight as fast as possible.  I focus on defensive use and concealed carry, and found the smaller window of the Liberty model no problem at all in that environment.  Both offer a “shake ‘n wake” feature, whereby they shut down after a few minutes without any movement, but automatically “wake up” at the former brightness setting as soon as they detect motion.  That saves battery life, a very useful feature.  (Also, the battery can be replaced without removing the sight, which would require re-zeroing it when it’s re-mounted.  That’s another useful feature.)

Obviously, it takes practice and training to get used to looking for a dot rather than lining up front and rear sights, but that’s just a matter of trigger time.  I found little trouble in adjusting to it;  in fact, I soon found it faster to use than iron sights, and more accurate in rapid fire, which is never a bad thing in defensive shooting.  Here’s the first of a series of video clips from well-known shooting personality Colion Noir as he learns to use his pistol-mounted reflex sight.  You’ll find more of his videos on the subject on YouTube.

The Liberty and Justice use the same mounting footprint as the Trijicon RMR, which is arguably the current industry standard in micro reflex sights (albeit at double the price of the Swampfox offerings).  The latter’s sights will thus mount to any firearm offering RMR compatibility.  I mounted my Liberty sight on a Glock 17 Gen5 with the MOS slide cut, using Glock’s RMR mounting plate, and it fit like a glove.  There’s also an optional Picatinny rail mount for either sight, to allow it to be used on a rifle or shotgun rail.  I plan to try one on an AR-15 as a backup sight before long.

I also installed Swampfox’s Ironsides protective sleeve over the Liberty.  The Ironsides is a metal frame that covers the top and sides of the Liberty sight, so that if it snags against anything, or bangs into something as it’s being used, or if you drop your weapon, the sight itself is protected from damage.  I think that’s a seriously good idea, particularly if you might have to draw your pistol in a hurry in confined situations like inside your motor vehicle – it’s bound to knock against something occasionally.  You can also use the Ironsides sleeve to rack the slide of your weapon against any convenient surface, like a wall or a door, without risking damage to the sight inside.  Those who’ve done any barricade shooting will really appreciate that.

Here’s what the combination of Liberty and Ironsides looks like on a Glock MOS slide, with a raised suppressor-height rear sight to allow iron sight use through the Liberty’s window if need be. 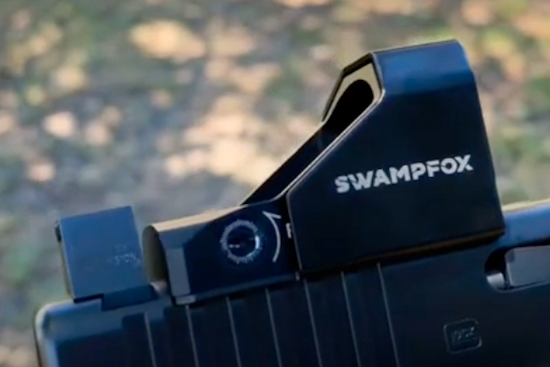 There are lots of video clips on YouTube showing such sights in operation.  Here’s a short video review of the Swampfox Liberty with the Ironsides frame.  Note the use of the Ironsides frame to rack the slide against an obstacle.

I’ve used a Trijicon RMR sight, and I find the Swampfox offerings to be just as good.  They’re also a lot more affordable.  If you’re in the market for a handgun red dot sight, and want something that’ll fit a limited budget, I think you could do a lot worse.  I’ll be buying more of them, because with my aging eyes, I’m going to need them!