We’ve discussed inflation in these pages until I’m sure some readers are sick of it.  Nevertheless, it’s a growing reality, and one that’s going to hammer us all in the not too distant future, unless I miss my guess.

Matthew Piepenburg of GoldSwitzerland has written an excellent summation of a major reason why the “official” US inflation rate is so out of touch with reality, and why it can’t be trusted.  I think this is an extremely important article, highlighting many of the issues we’ve discussed in recent months.

The blunt answer is that the Fed, in sync with the fiction writers at the Bureau of Labor Statistics (BLS), reports consumer inflation as honestly as Al Capone reported taxable income.

In short: The Fed has been lying about (i.e. downplaying) inflation for years.

As we’ve shown in many prior reports, the Consumer Price Index (CPI) scale used by the BLS to measure U.S. consumer price inflation is an open charade, allowing the BLS, and hence the Fed, to basically “report” inflation however they see fit—at least for now.

If, for example, the weighting methodologies hitherto used by the Fed to measure CPI inflation in the 1980’s were used today, then US, CPI-measured inflation would be closer to 10% not the reported 2%. 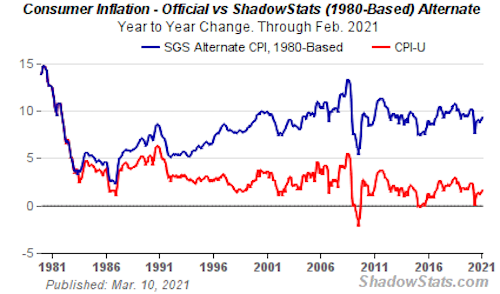 Concerned about by rising consumer costs, the Fed simply tweaked its CPI scale for measuring the same, effectively downplaying rising costs like a fat-camp scale which downplayed the significance of say… beer, chocolate or pizza.

In short, the Fed didn’t like the old CPI scale for measuring inflation, and so they simply replaced it with one in which 2+2 =2.

The Fed, in deep need of keeping its IOU-driven (i.e debt-driven) façade of “recovery” in motion, has no choice but to invent a respectably controlled (i.e. LOW) CPI inflation rate in order to make US Treasury bonds look even moderately attractive to others.

After all, the US lives on those IOU’s. They need to look pretty.

If, however, the more honest and much higher 10% inflation rate were honestly reported on an honest CPI scale, the inflation-adjusted yield on the US 10-Year Treasury would be negative 8%–which hardly makes it a pretty bond for the world to either admire or buy.

That’s a problem for Uncle Sam.

And so the Fed invents a CPI inflation number that is less embarrassing than reality. It’s just that simple.

What the Fed has been doing … is very clever yet extremely toxic, as well as openly duplicitous.

Specifically, the Fed now prints over $120B per month (to buy $80B in unwanted Treasury bonds and another $40B in unwanted, toxic MBS paper) with no apparent inflationary effect (despite the fact that inflation is defined by money supply) beyond its 2% “allowance.”

Such extreme money creation openly dilutes the USD to inflate away US debt with increasingly diluted dollars, now a desperate as well as deliberate Fed policy.

But by simultaneously and dishonestly mis-reporting CPI inflation as they dilute the dollar, the Fed can inflate away US debt without having to make the inflation-adjusted yields on Treasury bonds appear too embarrassingly ugly (i.e. grotesquely negative) for circulation and consumption.

Such open fraud, of course, allows the Fed to have its cake (debased currencies to inflate away debt) and eat it too (by under-reporting the otherwise disastrous CPI inflationary consequences of such a desperate policy.)

In short, by putting lipstick on the pig of what would otherwise by highly negative real yields on an openly bogus Treasury bonds if the CPI inflation rate were accurately reported, the Fed can continue to live on more debt, more IOU’s and more dishonesty.

The Fed may play for a while, but eventually there’s a natural market and currency-killing bullet aimed at its head.

That is, the only way to postpone a fatal rate spike is for the Fed to print more fiat dollars to buy more unwanted bond debt.

By extension then, the only way to keep bond and debt-soaked markets alive is to destroy the nation’s underlying currency by “over-printing” the same.

In short, the inflated markets may live under a [Yield Curve Control] blade, but the currencies, well..they die by the same sword.

… the entire inflation-deflation discussion, as well as data reports and projections, are ultimately meaningless if the very scale used to measure the CPI inflation is itself as bogus as that 42nd Street Rolex to which I so often refer.

And so, let the madness continue, let the creative writing, clever math and the equally distortive projections and pundits spin their tales about inflation “data” as we simply stare at the rising costs of health care, education, housing, stock and bond valuations or even the tolls on the George Washington Bridge.

In other words, if you want to see honest inflation, just walk out your front door—it’s everywhere, except that is, the open joke that is the CPI inflation scale.

There’s more at the link.  I highly recommend that you click over there and read it in full.  The author is in the business of buying and selling gold, so he has a visible bias in that direction, but it’s easy to make allowance for that – and it doesn’t affect the truth or the reality of what he says about the Fed.

There’s another reason for the Fed deliberately under-reporting inflation.  That is the index-linking of some entitlement programs (e.g. Social Security) and pension systems.  They’re supposed to increase their benefits every year according to the inflation rate, so that the real purchasing power of their payout isn’t eroded over time.  However, the government doesn’t have, and can’t borrow, that much money;  so, rather than report the true rate of inflation, it reports a much lower rate, and uses that to adjust benefits.  In so many words, it’s deliberately cheating recipients, because it can’t afford to pay them what they should be getting.

I repeat the warning I gave last Tuesday.  It dovetails neatly with Mr. Piepenburg’s analysis.

We’re facing a combination of some or all of the following three factors over the next few years:

The powers that be are going to have to cope with this – and there is no practical way to cope with it except to inflate the dollar to the point of almost complete worthlessness.  That’s the only way in which our massive debts can ever be paid off.  Weimar Germany did it, as we saw a few weeks ago – and that gave impetus to the rise of Adolf Hitler and the Nazi Party government within a few years.  Precisely and exactly the same economic – and, possibly, political – effects can be expected here in due course.  Remember, over 40% of all the dollars ever created were generated last year, out of binary 1’s and 0’s in the Federal Reserve’s computers.  They had no economic reality backing them up, just the “full faith and credit of the United States” – and that isn’t worth nearly as much as it was.  We’re on track to deficit-spend up to $5 trillion more during 2021, and possibly even more than that – all of it “created” out of thin air by the Federal Reserve.  That simply can’t go on:  and, as economist Herbert Stein famously said, “If something cannot go on forever, it will stop.“

Sooner or later, those economic chickens are going to come home to roost.

Friends, I can’t say this strongly enough:  we’re steaming full speed ahead into an economic minefield, and there is no way – I say again, NO WAY – we can avoid some of those mines.  They’re going to blow up, and if enough of them do, they may sink our economic ship.

Prepare now for what’s coming.  One simply can’t prepare in every way, unless one’s got millions to spare, but one can:

(Some argue that if one expects higher inflation, one should actually load up on debt as much as possible, to pay it off in future using inflated, lower-real-value dollars.  There’s one fatal flaw to that approach:  it assumes you’re going to earn more of those lower-value dollars, so that you can afford to pay off your debts.  However, if your income doesn’t go up, you’re still stuck with the bills – but increasing inflation will demand more of your income to pay for other necessities, leaving you less to pay off the previously-incurred debt.  Therefore, I strongly recommend against that approach unless what you’re buying is an asset that will appreciate in value to keep pace with inflation – and even then, make sure it’s within your present and probable future means, and that you’re likely to have enough money to keep up the repayments.  Anything more is a bonus, but can’t be relied upon in an uncertain economic environment.)

Also, establish relationships with those around you, and look for barter and self-help opportunities to assist each other, rather than pay tradesmen to do them.  (For example, “My son will cut your lawn ten times if you’ll help me fix my plumbing problem”, or “I’ll swap this rack of ribs for fresh vegetables,” or “I’ll cook supper for your family in return for your help weeding my garden”.)  The more we can trade with each other on a value-received-for-value-given basis, instead of relying on an over-depreciated and increasingly worthless dollar, the better for all of us.  This will also teach us who’s trustworthy among our neighbors, and who isn’t – never a bad thing to know, irrespective of inflation.