Brandon Smith does a great job of putting fundamental reality into words, and summing it up concisely.  He’s just done that, IMHO, for Antifa and Black Lives Matter.  Their fundamental issue isn’t racism at all – it’s Marxism, the ideology that informs and underpins all their efforts.

Leftists in particular have always had a problem with competition and it stems from the Marxist roots of their philosophy. There is this notion among lefties that the world is supposed to be “equal”. Now, there are different types of equality, and I think the majority of Americans agree with the idea of equal opportunity. Meaning, (at least in the West) we think every person regardless of their circumstances should be given the CHANCE to PROVE they can work hard and succeed. People should not be stopped from pursuing that chance merely because of who they are.

The psychological reality of mankind is that we are not born as blank slates; we are born with inherent qualities and the seeds of unique individual talents.  Marxists suffer from a complete mental disconnect with this concept.  If they were to admit that people are born with individual qualities and advantages and are not blank slates, then the foundation of their philosophy falls apart.  They rationalize their social engineering agenda under the premise that all people need to be “molded” into equal units.  They think people must be reeducated to reject bad beliefs and bad habits they were taught as blank slate children and learn to accept that everyone starts life out exactly the same.  Therefore, the majority of people who succeed are those that were given an unfair advantage, and success should be treated with disdain and suspicion.

But if people have inherent psychological characteristics and inherent advantages, then their personalities and qualities cannot be reformed.  Those “bad beliefs and habits” might actually be completely natural and necessary.  You might be able to hold them back through force or fear, but you can’t change the core of who they are.  If our biological and genetic imperatives prevail, Marxists become obsolete and useless.

The secret is to discover what your innate strengths are in life and take advantage of them to succeed. If you do not have innate talent, then you must at least have an innate ability to work hard. If you don’t have the ability and drive to work hard to become good at a thing, then you don’t deserve to get recognition for that thing.  You are not entitled to feel like a winner merely because you exist.  It’s really as simple as that.

I think the Marxist ideal is leading these kids down a path of brutal delusion, because they are never going to achieve the Utopian society that they seek. The world will never be “fair”, and the idea that you can force such conditions upon a culture without serious consequences is childish and mentally unstable. Make no mistake, we are entering an era in which the facade propping up limp-wristed and weak people is falling away. When it comes to economic strife, crisis and survival, there is no appeal to equality.  You’re in the jungle, baby, and if you have no merit, you’re gonna die.

The people willing to work hard and the people who seek to self improve are going to do well. The people that want a trophy just for participating are not going to make it.

This perfectly encapsulates all the modern shibboleths foisted upon us by left-wingers and progressives.

“White privilege“?  Nope – just an attempt to explain why we don’t have equality of outcomes yet, by blaming one race for it.

“Critical race theory“?  It’s an attempt to explain everything in terms of race, just as other movements throughout history have attempted to explain everything in terms of money, or industry, or social class, or divine will, or divine right, or whatever.  It’s just the latest facet of the same old effort to blame something outside human nature for our problems – and it fails the reality test, just as all the others did.  It’s yet another product of the academic ivory tower, divorced from the real world.

“Reparations for slavery“?  Nope – just wanting something for nothing.  Show me someone who was a slave, or whose parents or grandparents were slaves, and I’ll agree to compensate them for it.  If that doesn’t apply, I don’t see how they deserve any compensation or reparations for slavery at all.  As Candace Owens (herself black) has rightly observed: 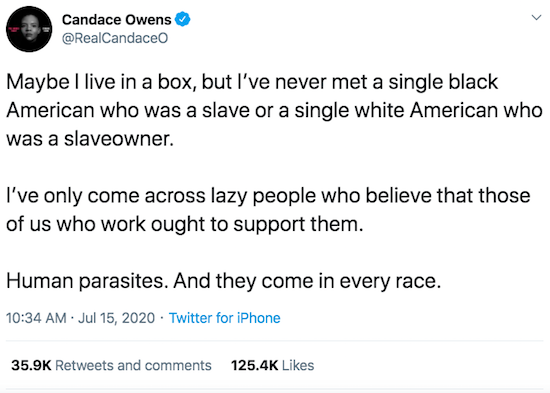 Racism does exist – but there are a heck of a lot of Americans who’ve overcome that challenge, and prospered despite it.  It all boils down to our individual response.  If we’re determined, have drive and ambition, and work our tails off, we’ll usually make good to at least some extent, despite all obstacles in our way.  That’s the lesson of human history in almost every age.  If we prefer to be sheep, and rely on our shepherds politicians and “community organizers” for everything . . . then we deserve all we (won’t) get.