Yet again, video evidence emerges that purports to show electoral fraud in operation in Georgia during ballot counting in Fulton County – the same county where an alleged “water leak” disrupted vote counting for some hours, only for it to emerge that there had been only a minor leak in a single toilet that had not disrupted anything (except for Republican Party vote monitors, who were sent home because of the “leak”).

This copy of the video is from One America News via YouTube, but it’s all over the Internet, so you can find one from a source more acceptable to you if that’s what you prefer.  (For the record, I find OAN just as biased and one-sided in its presentation, from a right-wing perspective, as CNN, MSNBC and others are from a left-wing perspective.  I’m not a fan of any of them.  How I wish there was some outlet, somewhere, that would present “just the facts” and leave viewers to make up their own minds!  Yeah, yeah, I know . . . that’s a pipe-dream.  Nowadays, may as well call it an opium pipe dream.)

That video has been met with a deafening silence by almost every mainstream media outlet, and by almost all left-wing politicians.  That’s as damning, in its own way, as if they’d jumped up and down and screamed that we should refuse to believe the evidence of our own eyes.  To them, silence means “it didn’t happen”.  If they don’t acknowledge an incident, it’s simply not part of the problem.  That’s living a lie, plain and simple.

Those who insist that “no court has ruled on any of Trump’s evidence” ignore that reality.  Assuming this video shows what it purports to portray – suitcases being taken out from beneath a table, in an official voting center, after other workers and independent observers had been sent home, then it is, in itself, convincing evidence of electoral fraud.  There is no reasonable explanation whatsoever for why that should happen.  Such unexplained suitcases simply should not be there.  Go on, produce another explanation for them.  I’d like to hear it.

This is why the results – or, rather, the alleged results – of the 2020 Presidential election cannot be allowed to stand.  If we tolerate this sort of criminal conduct, we are effectively tolerating the collapse of our constitutional republic.  If the progressive left can get away with this, there will never be another free and fair election in America – because they’ll carry on in the same way from now until forever.  It really is a case of now or never:  stop them now, or accept that they’ll never be stopped, and the rest of us might as well roll over and play dead.

I will not do that.  Nor will a great many other Americans – no matter what the cost may be.  We are not fooled, and we will not submit.  For your enlightenment, a selection from among many articles out there (some a lot more extreme than these):

I’ll let the last two links above sum it up.  From the second-last link:

I believe myself and others who have voiced their opinions are ready to make their stand. We are at a moment in time where everything is on the line. For the whole world, not just us … The communist are making their play for the country and it’s going to be up to us normal folks to do something about it.
. . .
This corruption throughout our country must be eliminated, right down to the very smallest of local levels. It’s not going to be pretty. Millions of gallons of blood must run the streets. Once this starts, it is going to be messy like nothing you’ve never seen. Best harden your hearts and get your mind wrapped around that. Do not even think of shedding a tear for them. They are enemies of our Republic and they hate everything that we cherish and stand for. We tried doing things the right way. We have exhausted all our options. The cartridge box is all that is left now.

And from the last link above:

In a gasoline refinery.

And it isn’t about who gets elected.

It’s about whether elections matter at all, or not.

It’s about whether the republic stands, or falls.

It isn’t Trumpistas against Never-Trumpers.

It’s not going to be Democrats vs. Republicans.

And they won’t be Goldwater republicans.

They’re going to be LeMay republicans. 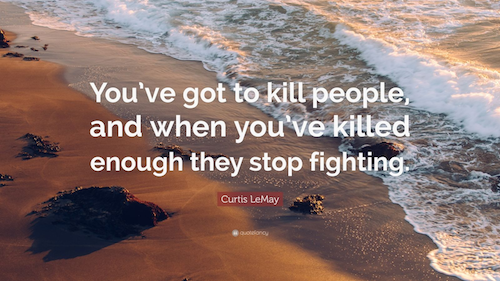 The Democrat communist Left (but I repeat myself) is running their locomotive full steam in the red zone, right at the bridge over that chasm, to get the coup they’ve huffed and puffed and salivated for, since 2015 (if not 1933, or 1912).

And that bridge they’re counting on getting over?

Everything that happens after that last inch is crossed is simply gravity, working.

That gets it said.

I don’t want that.  I’ve seen it in other countries, and the prospect of it happening here is terrifying . . . but the sheer scale of the blatant electoral fraud that confronts us, and the determination of the progressive left to defy our laws and our constitution and seize power at any cost, have rendered our preferences moot.

This theft of our constitutional republic cannot – I say again, CANNOT – be allowed to stand.

“What is the use of living, if it be not to strive for noble causes and to make this muddled world a better place for those who will live in it after we are gone?”

May God grant, while there is still time to prevent it, that this does not come to pass.