As often noted in these pages, the mainstream media has abandoned all pretense at objectivity and factual reporting.  Instead, they’re ideologically motivated by and in lockstep with the talking points approved by the Deep State and the progressive left.  They are never, under any circumstances, to be trusted unless and until their reports are confirmed by independent, reliable sources.

Their reporting on the COVID-19 pandemic is a classic example of this.  They continue to publicly denigrate Ivermectin as a “horse dewormer”, ignoring the fact that its developers won the Nobel Prize for Medicine for their work on it.  It’s proved spectacularly successful in treating COVID-19 in several countries – but you’d never know that from reading US news reports.  Instead, it’s “talked down” and sidelined in favor of vaccinations that are causing more and more deaths and life-threatening medical complications (of which more later).  The same happened to hydroxychloroquine, a drug that’s been in worldwide use for decades longer than Ivermectin, and has also proved very effective against COVID-19.  They’ve both been cast out into the health care wilderness, and I think I know why.  Follow the money.

In Japan, where despite massive vaccination programs the number of infections and the death toll were again rising steadily, a sea change took place last August.  The Tokyo Medical Association announced publicly that Ivermectin had proved to be a worthwhile treatment for COVID-19, and that henceforth it would be recommended for use without restriction.  (Note that so-called “fact-checkers” immediately tried to pretend that the announcement didn’t matter, because official Japanese government policy hadn’t changed.  Talk about being in lock-step with official propaganda!)  Well, guess what happened to Japan’s infection rate after that?  (Click any image for a larger view.) 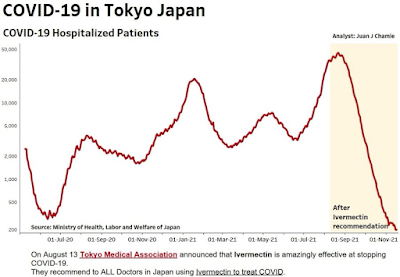 India and Japan have both relied on Ivermectin to treat their COVID-19 outbreaks.  Austria has not – in fact, after encouraging voluntary vaccination for months, that nation has just made it compulsory.  Talk about doubling down on failure!  Just look at the comparative infection rates in all three countries. 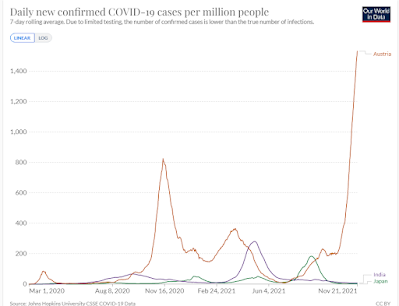 Something else the media are refusing to speculate about is the sudden and alarming increase in the general death rate in countries where vaccination is widespread.  I suppose they’d parrot the old line about “correlation is not causation” – but nobody’s checking to find out whether the cause correlates with vaccination or not.  It’s a taboo topic.  Medical research into the subject is verboten, and doctors who raise the issue risk losing their jobs.

There are even those who claim that the push to inoculate everybody with COVID-19 vaccines is a sinister depopulation agenda, designed to kill off “excess” human beings.  I find that almost impossible to believe, but those making the claim point to evidence that’s hard to refute.  You’ll have to make up your own mind.

You’ll look in vain for coverage of these issues in almost all the mainstream media.  The silence is so deafening that it’s suspicious in itself.  It’s clear that the silence-in-lockstep is being organized and directed.  It couldn’t be so universal in its effect unless it was.  You’ll find coverage only in “fringe” media and blogs like this one – sources that the mainstream media are quick to label as unreliable, or biased, or even deranged and unhinged.  Again, you’ll have to make up your own mind about that.

Archbishop Viganò is one person who needs no convincing.  See for yourself:

I find his arguments persuasive and convincing, as I do the other evidence I’ve linked above.  Decide for yourself.