The fuss over President Trump’s taxes is largely an artificially-whipped-up political chimera, designed to stir up discontent among his supporters and buttress the opinion of voters already opposed to him.  However, it does remind us of a basic reality in America today, which is that there’s been a $50 trillion transfer of wealth from the general population to the very wealthy since the 1970’s – and it’s been done deliberately, planned for and executed almost without people noticing.  Almost all of us are poorer as a result – and resentment is building.

Do you hear the pathetic bleating of America’s billionaires and their army of toadies? If not, you soon will, for a remarkable report has been released that documents the $50 trillion in earnings that’s been transferred to the Financial Aristocracy from the bottom 90% of American households in the past 45 years.

The report was prepared by the RAND Corporation, and has a suitably neutral title: Trends in Income From 1975 to 2018. (The full report can be downloaded for free.)

The rallying cry to claw back a significant percentage of the $50 trillion is just beginning. The billionaires have the money and power, of course, and the best government that money can buy plus the loyalty of a vast army of well-paid toadies, lackeys, factotums and apparatchiks.

But once the citizens no longer accept their servitude, the pendulum will gather momentum. America’s Financial Aristocracy has reached extremes not just of wealth-income-power inequality, but extremes of hubris. Their faith in luxury bug-out estates / private islands is evidence that even if the way of the Tao is reversal, they’ll have their private bodyguards and stashes of fuel and other essentials.

The clawback might not be as easy to rebuff as they anticipate, nor will the pendulum swing that’s just starting necessarily arrive at the opposite extreme in the orderly, predictable fashion they’re accustomed to controlling.

The Washington Post provides two illustrations of what this means.  First, from an article titled “Wealth concentration returning to ‘levels last seen during the Roaring Twenties,’ according to new research“: 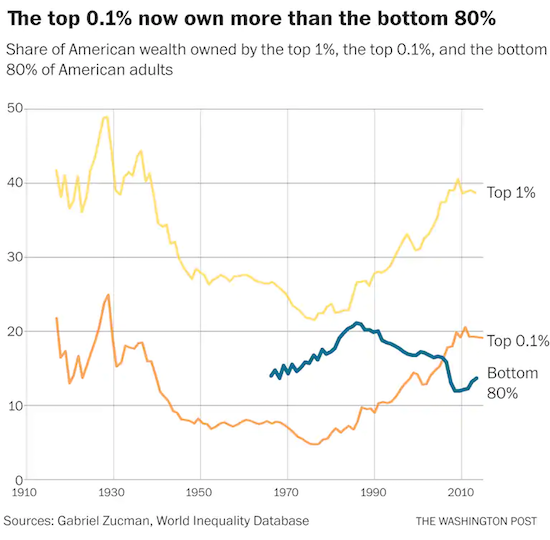 Then, from an editorial titled “The massive triumph of the rich, illustrated by stunning new data“:

Those two illustrations should send shivers down the spine of anyone who studies history and economics.  If you do, you know that in every single society where such income and wealth inequality has taken root, there’s been a strong, often revolutionary reaction against it from the broad mass of the people.  For example, that was one of the main reasons behind the French Revolution.  It’s also behind much of what we’ve seen in American society over the past decade or more.  “Occupy Wall Street”, Black Lives Matter, Antifa, and a host of other movements – they’re all fundamentally Marxist at heart, when one analyzes them and studies the background of their leaders.  They’re all fundamentally anti-capitalist, because they see this transfer of wealth as one of the biggest (if not the biggest) problems of US society today, and they want to undo it, by force if necessary.

It’s hard to criticize that understanding of the problem, because it’s all too accurate.  When you take away the prospect of a decent income from the broad mass of society, they’re left discontented, angry and ready to fight for better prospects.  I think we’re seeing more and more of that in the reaction against COVID-19 restrictions.  It’s not just a reaction against unreasonable regulations – it’s defiance of the authorities that people believe are responsible for the current mess (economic as well as health) in which we find ourselves.  Economic discontent is fueling all sorts of other discontents.

Commenting on the RAND Corporation report, Time magazine provides some extraordinary, even mind-boggling facts.  Bold, underlined text is my emphasis.

A staggering $50 trillion. That is how much the upward redistribution of income has cost American workers over the past several decades … had the more equitable income distributions of the three decades following World War II (1945 through 1974) merely held steady, the aggregate annual income of Americans earning below the 90th percentile would have been $2.5 trillion higher in the year 2018 alone. That is an amount equal to nearly 12 percent of GDP—enough to more than double median income—enough to pay every single working American in the bottom nine deciles an additional $1,144 a month. Every month. Every single year.

As the RAND report … demonstrates, a rising tide most definitely did not lift all boats. It didn’t even lift most of them, as nearly all of the benefits of growth these past 45 years were captured by those at the very top. And as the American economy grows radically unequal it is holding back economic growth itself.

It is easy to see how [COVID-19], and the draconian measures required to contain it, might spark an economic depression. But look straight into the eyes of the elephant in the room, and it is impossible to deny the many ways in which our extreme inequality—an exceptionally American affliction—has made the virus more deadly and its economic consequences more dire than in any other advanced nation. Why is our death toll so high and our unemployment rate so staggeringly off the charts? Why was our nation so unprepared, and our economy so fragile? Why have we lacked the stamina and the will to contain the virus like most other advanced nations? The reason is staring us in the face: a stampede of rising inequality that has been trampling the lives and livelihoods of the vast majority of Americans, year after year after year.

On average, extreme inequality is costing the median income full-time worker about $42,000 a year. Adjusted for inflation using the CPI, the numbers are even worse: half of all full-time workers (those at or below the median income of $50,000 a year) now earn less than half what they would have had incomes across the distribution continued to keep pace with economic growth. And that’s per worker, not per household. At both the 25th and 50th percentiles, households comprised of a married couple with one full-time worker earned thousands of dollars less in 2018 dollars than a comparable household in 1975—and $50,000 and $66,000 less respectively than if inequality had held constant—a predicament compounded by the rising costs of maintaining a dignified middle-class life. According to Oren Cass, executive director of the conservative think tank American Compass, the median male worker needed 30 weeks of income in 1985 to pay for housing, healthcare, transportation, and education for his family. By 2018, that “Cost of Thriving Index” had increased to 53 weeks (more weeks than in an actual year). But the counterfactual reveals an even starker picture: In 2018, the combined income of married households with two full-time workers was barely more than what the income of a single-earner household would have earned had inequality held constant. Two-income families are now working twice the hours to maintain a shrinking share of the pie, while struggling to pay housing, healthcare, education, childcare, and transportations costs that have grown at two to three times the rate of inflation.

Again, more at the link.  It’s well worth your time to read that article in full.

So, when you read the fuss and bother about President Trump’s taxes, think of them in the context of the numbers provided above.  I don’t blame the President for being a successful businessman, and hiring good accountants to minimize his tax liabilities.  As I said yesterday, anyone with enough sense and the means to do so is doing the same thing.  However, when one looks at the resentment of the average American when faced with our current economic reality, that fuss and bother takes on a new dimension.  Here’s an illustration from that Time magazine article.

Economic discontent is real, and it’s growing.  It doesn’t matter whether you’re conservative or liberal, left-wing or right-wing in your politics.  The disparity is a fact of life, and it’s going to have to be dealt with, sooner rather than later – or it’s going to become fuel for yet another revolution.  That’s the lesson of history, and it’s at the root of what we’re seeing on our streets today.  Economic discontent fuels all other discontents.