The Fed uses monetary policies … to create asset price inflation and make a relatively small number of large asset holders vastly wealthier so that they might spend more. This has been explained in numerous Fed papers, including by Janet Yellen back when she was still president of the San Francisco Fed.

The Fed’s wealth distribution data divides the US population into four groups by wealth: The “Top 1%,” the “Next 9%” (2% to 10%),” the “next 40%,” and the “bottom 50%.” My Wealth Effect Monitor divides this data by the number of households in each category, to obtain the average wealth per household in each category. Note the immense increase in the wealth for the 1% households after the Fed’s money-printing scheme and interest rate repression started in March 2020: 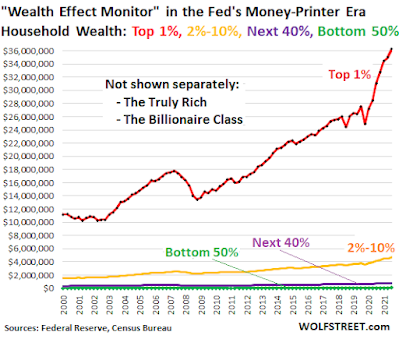 As you can see from the steep curve of the red line, the “Top 1%” households were the primary beneficiaries of the Fed’s policies since March 2020. These policies were designed to inflate asset prices, and only asset holders benefited from that. The more assets they held, the more they benefited.

So here is the average wealth (= assets minus debts) per household, by category in Q4, 2021:

If I give my favorite homeless guy $5, and he already has $5 in his pocket, I increased his wealth by 100%, which is a huge percentage jump in wealth. But he’s still homeless and still doesn’t have any wealth.

Percentage increases are regularly touted to show that the wealth at the bottom increased, when in fact, it increased by only minuscule amounts of dollars because the bottom 50% have so little that even a big percentage increase still amounts to nearly nothing in dollar terms, compared to the billionaire class.

Since March 2020, the Fed printed $4.9 trillion and repressed short-term interest rates to near-zero in order to inflate asset prices so that the asset holders would get immensely more wealthy, in line with its doctrine of the Wealth Effect.

This act has produced the greatest economic injustice committed in recent US history … this money-printing binge has now created the worst inflation in 40 years. Inflation destroys the purchasing power of the dollar, and it destroys the purchasing power of labor denominated in dollars. Just to get by, the bottom 50% spend all, or nearly all, of their income on consumer items – such as housing, transportation, and food. And they got mauled by this rampant consumer price inflation that this money printing has triggered. And they’re the ones paying for this act of the Fed to enrich the asset holders.

I imagine almost all my readers are, like myself and Miss D., in the “bottom 90%” of the graphic above.  Welcome to the economic septic tank level, folks – courtesy of the Federal Reserve!