Over the weekend, I was intrigued to read a BBC report about the “Euklisia Rug“, a Welsh invention that’s claimed to have been the world’s first sleeping bag. 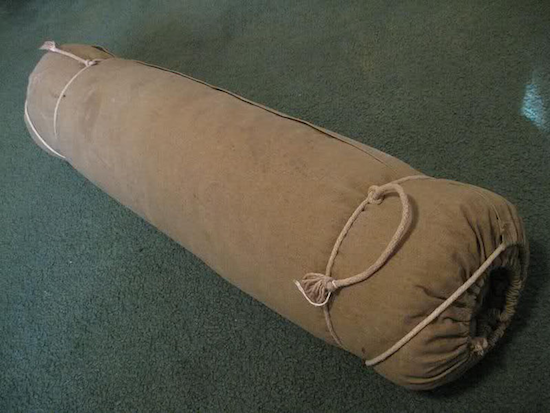 The Euklisia rug – patented by Powys entrepreneur Sir Pryce Jones in 1876 – was exported around the world in the late 19th Century.

No examples of it survive, but researchers on the BBC’s Wales and the History of the World programme recreated it using the original patent.

BBC Wales researchers have also found records of the rug in the Australian outback, and at missionary posts in the Congo.

Wales and the History of the World presenter Eddie Butler said: “It was great to see this Welsh first brought back to life.

“It didn’t look anything like a sleeping bag today – it’s more of a folded rug. But you can see it only needed a couple of fasteners to be more recognisable as a sleeping bag.

“However simple it is, it must have been a great bonus for troops – especially in places like Russia. I expect this Welsh invention helped thousands of soldiers to get a better night’s sleep.”

The rug featured a sewn-in blow up pillow, which would probably have been made of vulcanised rubber.

An advertisement from Pryce Jones to sell surplus Euklisia Rugs to the public has survived.

Made for the Russian Army

Pryce Jones has the honor of calling the special attention of Ladies to the following.

He has on hand seventeen thousand Brown Army Blankets (fitted with an air tight pillow, as per sketch above) which were expressly made for the Russian Army. These are the remains of a Contract of Sixty thousand, delivery of which was to have taken place at the rate of 6,000 per week. Plevna fell, and the order was cancelled. These goods have remained in his possession ever since, carefully packed in bales of fifties.

P.J. proposes to clear off the lot at a great sacrifice – he intends removing the air tight pillows and sewing up the slot, the space may, if required, be refilled with a pillow of feathers, wool, cotton or straw, and may in this manner, be utilized for the poor – being a bed and blanket combined.

These are much wider and longer than ordinary rugs.

These Blankets may, if desired, be obtained with the patent pillow attached, the cost of each rug would then be 3/- more than price named above.

As P.J. offers these goods under cost of production, he solicits and hopes to receive early orders.

Considering how many nights I’ve spent in sleeping bags, military and civilian, it’s interesting to find out where the concept had its beginning.  If you’d like to learn more about the history of sleeping bags, see here for some interesting pictures.