I’ve commented before that the loony Left’s obsession with Sarah Palin shows itself in their desperate attempts to ‘smear’ her and destroy her credibility with the public. They make such a fuss about her that it’s quite obvious they’re terrified of what might happen if she catches the public’s imagination.

The same thing now seems to be happening with Governor Rick Perry of Texas. Since he announced his candidacy for President, the screams of horror, outrage and denial from the Left have been deafening – and, for the most part, they appear to be bogus. I’m not one of Governor Perry’s fans, and I don’t know yet whether or not I’ll become one, but the clamor of opposition is demonstrating very clearly that the Left views him as a major threat. The Pesky Truth blog has published an article in two parts outlining 17 attacks made on Governor Perry (and debunking them all), plus a third article containing more positive views. They make interesting reading.

Even more telling, to me, was the advertisement placed by one of Governor Perry’s opponents, asking anyone who’d been sexually involved with him to come forward. 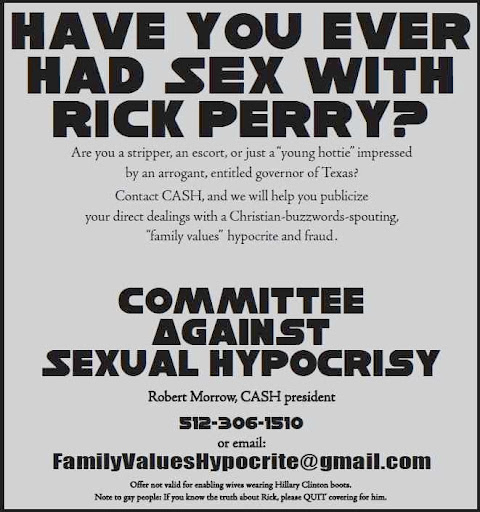 Turns out that Mr. Morrow is acting alone – CASH is a one-person organization. He’s also alleged to be “a certified conspiracy nut, with a JFK-assassination fixation and a long record of harassing Bill and Hillary Clinton“. Certainly, anyone who can simultaneously look for both heterosexual and homosexual (alleged) partners of Governor Perry (see the last line in the advertisement above) would appear to have a few things to sort out (in his own mind, at least) about his target’s sexual preferences and tendencies. The mere fact of that advertisement’s appearance discredits (in my opinion) anyone placing it, anyone responding to it, and anyone (or any party) using allegations produced by it to smear its target.

I note, too, that US trial lawyers have formed a special Political Action Committee [PAC] to oppose Governor Perry should he win the Republican Party’s nomination. He’s campaigned aggressively for tort reform, so they’re running scared that he might do the same as POTUS. Since I’m one of those who strongly advocate tort reform, that’s another reason to like what I see so far in Governor Perry. As I said earlier, I’m not one of his fans at the moment; but if the Left goes on frothing at the mouth about him like this, that could change . . .

I think Miss D. had the best idea. The other morning she turned to me, with a wicked gleam in her eye, and said, “Wouldn’t it be fun if Sarah Palin ran for President with Allen West as her Vice-Presidential candidate?” When I’d stopped laughing, we agreed that it wouldn’t really matter which one of them ran for President, and which for Vice-President. To have a decorated combat veteran (an African-American) and the former Governor of Alaska (an outspokenly conservative woman) on the same ticket is guaranteed to generate enough apoplexy to send the looniest of the Left into orbit!