A post over at Come And Make It caught my attention the other day.  The author (an expatriate American) states baldly that “American style wheel barrows suck“.

Sorry, but not everything we grew up with is the best.

As a kid I used our wheel barrow more times than I can count.  The back strain, the struggle to keep from tipping it over, and getting it stuck in holes.

Meanwhile in the east there is the 2 wheel wheelbarrow.

More reminiscent of the Chinese design with the weight balanced to the center and only needing to balance one axis instead of 2 while not needing to carry the so much weight.

I have to agree with him.  Having used single-wheel, traditional Western wheelbarrows for decades, I’ve never liked them and had many accidents with them.  Two-wheel barrows, on the other hand (which are freely available) are far more efficient at keeping a load balanced and making it more manageable.  For someone like me, with a fused spine (and its concomitant lifting limitations) and nerve damage in my leg, they’re much easier and less painful to use than the conventional style.  You can even adapt a two-wheel wheelbarrow into a utility cart to tow behind a lawn tractor.  Here’s how one user did it.  Others come with electric motors, to make moving them even easier.

As he points out, if you don’t need to tip up your wheelbarrow to dump a load of dirt or whatever, there’s an even better load-carrying option:  the Chinese wheelbarrow.

The Chinese wheelbarrow – which was driven by human labour, beasts of burden and wind power – was of a different design than its European counterpart. By placing a large wheel in the middle of the vehicle instead of a smaller wheel in front, one could easily carry three to six times as much weight than if using a European wheelbarrow.

The one-wheeled vehicle appeared around the time the extensive Ancient Chinese road infrastructure began to disintegrate. Instead of holding on to carts, wagons and wide paved roads, the Chinese turned their focus to a much more easily maintainable network of narrow paths designed for wheelbarrows. The Europeans, faced with similar problems at the time, did not adapt and subsequently lost the option of smooth land transportation for almost one thousand years.

… the wheelbarrow could be considered the most efficient transport option over land, prior to the Industrial Revolution. It could take a load similar to that of a pack animal, yet it was powered by human labour and not prone to disobedience.

Compared to a two-wheeled cart or a four-wheeled wagon, a wheelbarrow was much cheaper to build because wheel construction was a labour-intensive job. Although the wheelbarrow required a road, a very narrow path (about as wide as the wheel) sufficed, and it could be bumpy. The two handles gave an intimacy of control that made the wheelbarrow very manoeuvrable.

On the European wheelbarrow the wheel was (and is) invariably placed at the furthest forward end of the barrow, so that the weight of the burden is equally distributed between the wheel and the man pushing it. In fact, the wheel substitutes for the front man of the handbarrow or stretcher, the carrying tool that was replaced by the wheelbarrow (illustration on the right).

In the characteristic Chinese design a much larger wheel was (and is) placed in the middle of the wheelbarrow, so that it takes the full weight of the burden with the human operator only guiding the vehicle. In fact, in this design the wheel substitutes for a pack animal. In other words, when the load is 100 kg, the operator of a European wheelbarrow carries a load of 50 kg while the operator of a Chinese wheelbarrow carries nothing. He (or she) only has to push or pull, and steer. 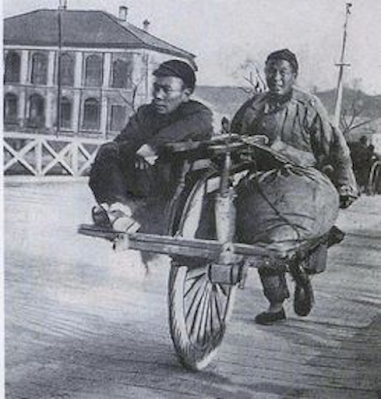 As so many other innovative technologies, the Chinese wheelbarrow was originally developed for military purposes. The first records mention its use for supplying food to the army. The wheelbarrow gave the Chinese armies such an advantage in moving goods that it was kept secret – early Chinese writings talk about wheelbarrows in code. True to its origin, the wheelbarrow remained in use for military operations, though not only to supply food to soldiers. In 1176, Tsêng Min-Hsing alluded to the military use of the wheelbarrow in forming protective layers.

His words are quoted by Joseph Needham:

“Not only is it useful for transporting army rations, but at need it can be employed as a defensive obstruction against cavalry. Since the digging of trenches and moats, and the building of forts, take time, the wheelbarrows can be deployed round the perimeter so that the enemy’s horses cannot easily pass over. This kind of vehicle can readily go forward and withdraw, and can be used for any purpose. It might well be called a ‘mobile fort’.”

I’ve seen Chinese-style wheelbarrows in use in several Third World locations, and was impressed by how much could be carried on them (up to several hundred pounds, for short distances) and how easily they could be managed even over uneven or broken terrain.  The most intriguing adaptation was a wheelbarrow with two stretchers, one mounted on either side of the wheel.  The stretchers ended in extended handles, so that one person could pull the wheelbarrow from the front while someone else pushed from the rear.  There were even four “legs”, folding up against the stretchers, so that when the “drivers” stopped, they could prop up the wheelbarrow without spilling the men it carried.  Compared to Western stretcher-bearers (usually 4 men carrying a single casualty), two men could handle two casualties on such a wheelbarrow, freeing 6 men to be assigned to other duties.  I’ve even seen a donkey (or another human) harnessed to the front of the wheelbarrow, pulling while its operator pushed it from behind.

As a load-carrying vehicle in emergencies, to haul a lot of weight while evacuating on foot or going from place to place, the Chinese wheelbarrow is vastly superior to many Western-style carts or “sleds” that one sees discussed in “prepper” literature.  It’s immensely practical.  However, despite the fact that Americans undoubtedly saw them in use during the Korean and Vietnam wars, I’ve never seen something like it offered for sale in the USA.  If anyone knows of one, please let us know in Comments.  I think there’d be a lot of buyers for a well-made unit (including me).

(Finally, for those with long memories of firearms and survivalist online forums, who could forget Gunkid and his “tactical wheelbarrow”?  The guy was a psycho nutcase and a repeat [and convicted] felon, but he sure could use his imagination.  Perhaps the long days and nights in his prison cell gave him more time to think up such abberations…)