For ‘preppers’ in particular, and for everybody in general, keep your eye on what happens in Vancouver, Canada over the next few days and weeks.  A major storm has blocked or destroyed literally every transportation route leading into the city – by road, rail and even (for the moment) by air.

There is currently no way to drive between Vancouver and the rest of Canada.

The Lower Mainland and Fraser Valley are now completely cut off from the rest of British Columbia and the country by road.

The southbound lanes of the Coquihalla Highway have been completely washed out near Othello Tunnels.

Flooding and mudslides had closed most routes between the coast and BC Interior over the past 24 hours, but the back route through Whistler on Hwy 99 remained open this morning.

That changed shortly after 11 am, when DriveBC reported that a mudslide 42 kilometres south of Lillooet had shut down Hwy 99 as well.

The only way to drive between the coast and the rest of Canada at this time is through the United States.

However, Washington is also seeing highway closures due to the inclement weather and residents would need a COVID-19 test to re-enter Canada.

It’s not just roads, either. 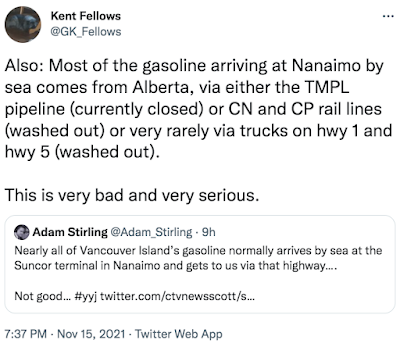 There are lots of reader comments about the situation over at the Canadian blog Small Dead Animals.  Here’s one:

I gotta stock up on food tomorrow because the island will run out in a few days here basically. Internet is down at the nearby stores so it’s cash only. The bank ATMs were closed too. Hopefully tomorrow internet is back!

Er . . . I think it’s a wee bit late to start stocking up on food, because everyone else in and around Vancouver will be doing the same thing, and what supplies there are will vanish like snow on a hot rock!  Also, one hopes the commenter had cash in reserve, because it sounds as if his credit cards won’t help him much (and I doubt that stores will accept checks under such circumstances).

This is going to be a very practical test in how well a major city is prepared to survive a weather disaster.  The photographs of the damaged roads and surface routes look very bad.  Let’s all watch how Canada copes, and learn, and update our own preparations accordingly.  It might not be a bad idea to contribute to relief efforts there, either – this is going to take a while to sort out.

(A tip o’ the hat to reader Joe L., who e-mailed me with the news of Vancouver’s cut-off.)