Two very interesting analyses – one statistical, one technical – have surfaced over the past couple of days.  I think they show beyond reasonable doubt the extent of the electoral fraud that was perpetrated in the 2020 Presidential elections.  I submit that the onus is now on those who say the election was legitimate to disprove these analyses – and I think that’s going to be very, very difficult.  If President Trump’s legal team can arrange to get this sort of information before the Supreme Court, I can’t see how SCOTUS can do otherwise but invalidate the results of the elections in at least the states discussed in these documents.

The first report is from a SubStack account calling itself “Vote Pattern Analysis“.  I don’t know who’s behind it, but it provides exhaustive detail about the raw data used and how they were analyzed – sufficient for any statistician to check and/or reproduce its findings.  Here’s a key excerpt.  Bold print is emphasis in the original.

Our analysis finds that a few key vote updates in competitive states were unusually large in size and had an unusually high Biden-to-Trump ratio. We demonstrate the results differ enough from expected results to be cause for concern.

The four vote updates in question are:

This report predicts what these vote updates would have looked like, had they followed the same pattern as the vast majority of the 8,950 others. We find that the extents of the respective anomalies here are more than the margin of victory in all three states — Michigan, Wisconsin, and Georgia — which collectively represent forty-two electoral votes.

Go read the study in full for yourself.

The second analysis comes from a sworn affidavit by Russell James Ramsland Jr., who describes himself as “part of the management team of Allied Security Operations Group, LLC (ASOG).”  The company has been involved in detailed analysis of the Dominion vote tabulation software used in over 30 states during the recent elections.

Mr. Ramsland’s evaluation is damning in a number of respects.  The online file has been set up so I can’t directly copy text, but I can screenshot excerpts from it.  Here are three.  I urge you to read the affidavit in full to put them in context. 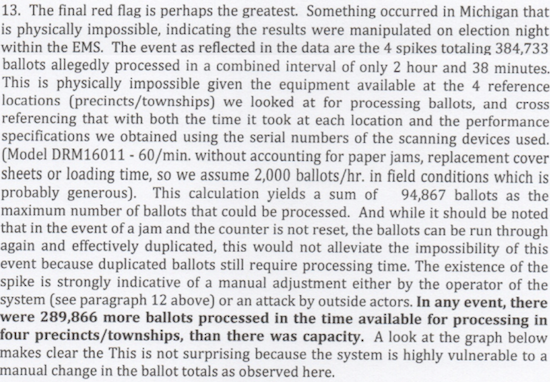 How anyone can read those two analyses and still claim, with a straight face, that no electoral fraud took place during the 2020 Presidential election, I absolutely do not understand.

Joe Biden was not elected President of the United States.  The vote totals were manipulated to give that impression – but it’s false.  I can only hope and pray that the truth is recognized and enforced by the United States Supreme Court before it’s too late.

Of course, if it does reach that high, then the possibilities for criminal investigation and charges become much greater.  Don’t forget that Rudy Giuliani, heading President Trump’s legal team, was a US Attorney during the 1980’s, and spearheaded the assault on the Mafia in New York City.  He was instrumental in using the Racketeer Influenced and Corrupt Organizations Act against organized crime.  Look at what he said at a news conference last week.  (Bold, underlined text is my emphasis.)

… what emerged very quickly is it’s not a single voter fraud in one state. This pattern repeats itself in a number of states. Almost exactly the same pattern, which to any experienced investigator, prosecutor would suggest that there was a plan from a centralized place to execute these various acts of voter fraud, specifically focused on big cities and specifically focused on, as you would imagine, big cities controlled by Democrats, and particularly focused on big cities that have a long history of corruption. The number of voter fraud cases in Philadelphia could fill a library. Just a few weeks ago, there was a conviction for voter fraud and one two weeks before that. And I’ve often said, I guess, sarcastically, but it’s true, the only surprise I would have found in this is that Philadelphia hadn’t cheated in this election, because, for the last 60 years, they’ve cheated in just about every single election. You could say the same thing about Detroit.

Each one of these cities are cities that are controlled by Democrats, which means they can get away with anything they want to do. It means they have a certain degree of control over… certainly control the election board completely. And they control law enforcement. And unfortunately, they have some friendly judges that will issue ridiculously irrational opinions just to come out in their favor.

Does that sound to you like a lawyer who’s thinking hard about applying RICO’s provisions to those responsible for electoral fraud?  It sure does to me!