The first civilian video of the damaged Nord Stream pipeline has emerged.  Screen captures from the video appear to show that the explosion originated inside the pipeline, and blew outward.  Click either image for a larger view. 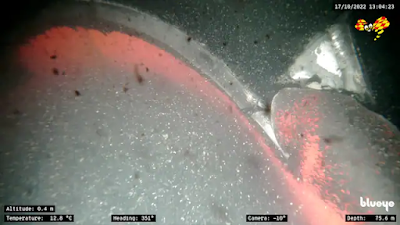 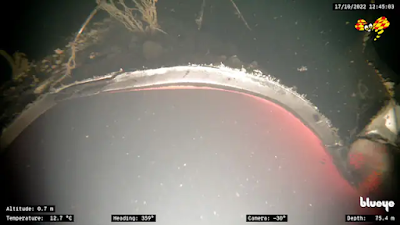 That would tend to support Lawdog’s theory that the explosions were caused by methane hydrates, that congealed into a hydrate plug inside the pipeline.  If an explosion had occurred outside the pipeline, it would have blown the metal inwards, rather than outwards.  Of course, those few images aren’t conclusive, but the deep trenches blown into the seabed around the explosion site would tend to support the theory.  If an external explosion had caused the blast, it would presumably have made a crater (a deep divot in the ground) around the explosion site, in a roughly circular pattern.  If the video is to be believed, this explosion did not do that;  but it might well have propagated a seabed rupture reaching out to either side of the pipeline, as the seismic effect of the blast made itself felt through the concrete surrounding the pipe and protecting it on the sea floor.

I’m not an engineer, and I’m not an explosives expert.  Nevertheless, I’ve caused a few loud bangs in my time (back when I was in uniform), and I know a little about the subject.  I’ll be watching this with great interest, to see what else comes out in the wash.