As part of preparing for the coming winter, and also dealing with the current supply chain problems that are (sometimes severely) restricting the availability of things we need, I’ve been considering our emergency heating requirements.

Last winter Texas suffered a major power outage, lasting weeks in some places, and there were several incidents of shorter outages (up to a day or two).  Even though we didn’t lose power during that long cold spell, our house grew steadily colder, because our geothermal heating unit simply couldn’t compensate for our poorly insulated walls (Texas houses not being built, generally speaking, to withstand prolonged freezing-level temperatures).  By the time the cold snap broke, our home’s internal temperature had dropped into the 50’s, far below the temperature at which we prefer to keep it.

I wanted to have two contingency backup plans in place.  First, I wanted a couple of small indoor-safe heaters that could warm up our studies (where Miss D. and I write, blog, etc.), and our bedroom at night, in case of a short-term power outage.  Second, I wanted an indoor-safe heater powerful enough to warm the whole house a few degrees in very cold weather, so that our geothermal unit could be supported and wouldn’t have to carry the entire load itself in very cold weather.  (Of course, during a power outage, it’ll help keep the whole house at a livable temperature.)  We already have a couple of camping stoves that can be used to prepare food during a power outage, so that need was covered.

I chose the Buddy indoor-safe propane unit from Mr. Heater for the first requirement.  They’re rated to warm a room up to 225 square feet in size, and are fueled by the well-known 1lb. Coleman propane tanks, which are widely available.  (A larger model takes two of the Coleman tanks, and can warm up to 450 square feet.) 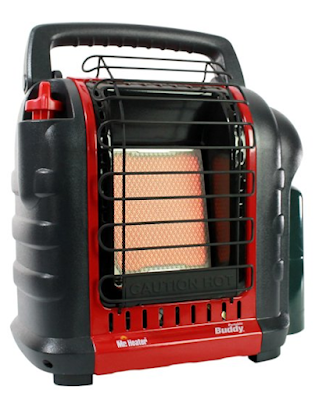 For the second requirement, I selected the Dyna-Glo indoor-safe kerosene convection heater, which is rated to warm up to 1,000 square feet.  (Yes, I also bought extra carbon monoxide alarms, to put in rooms where the heaters are in use;  and we’ll crack a window in those rooms, to prevent difficulties.) 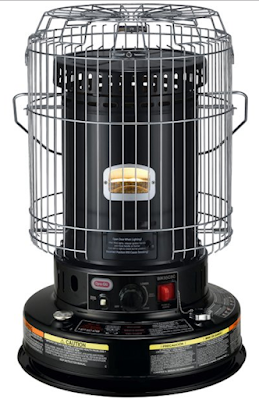 However, when it came time to actually buy them, I got quite a surprise.  Supply is very “iffy”:  despite lots of stores listing them as available, they weren’t, or were “delayed in shipment”.  I guess many of them are sitting in containers at sea, waiting to get through the cargo handling backlog to land in the USA.  Also, prices were all over the place.  At the time of writing, the Dyna-Glo unit is $234.77 at Amazon, but only $148.00 at Walmart;  the Mr. Heater unit is $90.92 versus $77.00 at the same stores;  and the Coleman propane tanks are a mind-boggling $17.49 per single unit at Amazon, versus only $3.97 at Walmart!  (They’re cheaper in bulk quantities, of course.)  I’m sure you can guess where I bought ours!  Other stores showed similar price variations, and they varied almost by the day – sometimes showing changes more than once a day.  Clearly, there’s high demand for these units, but very limited supply.

I bought what we needed, after shopping around to find the best price for available stock, but the weird price variations (particularly on Coleman tanks) made me reconsider our fuel needs.  Instead of buying more Coleman tanks (we already have several), I bought two screw-on adapters that allow them to be refilled from regular 20lb. or 30lb. propane tanks.  The adapters are only about $7 apiece, and regular propane tanks can be refilled at present for about a dollar per pound of gas, or about $4 per gallon (there are 4 gallons in a 20lb. tank filled to 80% capacity, or 16lb., which is the norm).  It’ll be much cheaper to refill our small Coleman tanks as we use them, rather than pay three times that much or more for new, filled tanks.  Mr. Heater claims a 3-hour run time at maximum heat setting, which translates to a fuel cost of about $0.34 per hour if we refill our small cylinders (less at lower heat settings, of course).

As for fuel for the Dyna-Glo unit, one can buy heater-grade kerosene in 1-, 2½- and 5-gallon containers from various places.  Again, prices vary widely, so shop around.  Since our need for the big heater is likely to be infrequent, I’ve bought enough to see us through a winter twice as bad as the last one, just in case.  If we don’t use it all, that doesn’t matter:  kerosene keeps indefinitely, so there’s no problem with leftover fuel going bad, as there would be with gasoline.  Those in colder climes, or with a less reliable electricity supply, will need more fuel, of course.  (All our kerosene and propane will be stored outside our home, in a garden shed, for obvious fire-hazard reasons.)

One word of warning concerning both heaters:  there appear to be different model numbers assigned to identical units, for sale in different stores, so that each can claim that their model is “exclusive to [store name]”.  Technically, they’re right, thanks to the different number;  but it makes it very difficult to look up parts (e.g. wicks for the Dyna-Glo heater) online, when the model number a store is using is different to the generic one listed by the manufacturer of the wick.  It took me a couple of days to figure out the problem and find a spare wick that will fit our heater.  When you get your heater, look up the exact model number listed on its box or in the owner’s manual, then search for wicks and other parts using that number, to avoid confusion.

With the way the economy’s being driven into the ground by the Biden administration, and the supply chain problems that are crippling commerce and industry, I think we may face more power interruptions than usual this winter.  Power stations will find it difficult to get spare parts at short notice to repair breakdowns, and repair crews dealing with the aftermath of snow and ice storms will face the same problem.  I suggest it’s no more than prudent forethought to prepare for such outages as best we can, while there are still indoor-safe alternative-fuel heaters to be had.

(Speaking of prudent forethought, I snagged the last two bottles of anti-freeze windshield washing fluid in our local Walmart during my shopping.  The manager of the auto section didn’t know if and/or when they’re getting more in.  Anti-freeze radiator fluid was also in short supply.  Might be a good idea to stock up on those, too, and related items for cold weather travel like snow and ice scrapers, etc.)