It’s got to the point where politically correct bigots are denying medical facts in their efforts to dominate discourse.

A Norwegian feminist faces up to three years in prison for saying that biological men can’t be lesbians.

Christina Ellingsen, of the global feminist organization Women’s Declaration International (WDI), is under police investigation for making the claim in a tweet in which she criticized the trans activism group FRI.

“Why [does] FRI teach young people that males can be lesbians? Isn’t that conversion therapy?” Ellingsen allegedly tweeted.

She also questioned the legitimacy of FRI’s advisor Christine Jentoft identifying as a lesbian despite being born a biological male.

“Jentoft, who is male and an advisor in FRI, presents himself as a lesbian – that’s how bonkers the organization which supposedly works to protect young lesbians’ interests is. How does it help young lesbians when males claim to be lesbian, too?” Ellingsen reportedly said.

“You are a man. You cannot be a mother,” Ellingsen allegedly told Jentoft. “To normalize the idea that men can be mothers is a defined form of discrimination against women.”

“Amnesty International is also accusing Ellingsen of harassment for saying that Jentoft is a man on national television,” reports Reclaim the Net.

Norway’s hate crime laws were made more draconian last year to make criticizing gender ideology a crime and Ellingsen faces up to three years in prison if she is convicted.

The fact that Ms. Ellingsen is manifestly (oops – should that be “womanifestly”?) correct in what she says is being completely disregarded, by the law, by the authorities, and presumably by the courts as well.  Like it or not, men – those with an XY chromosome – are not women, and cannot be a mother (in the sense of giving birth).  Only those with an XX chromosome – actual women, in the medical sense – can do that.  To say otherwise is ludicrous, nonsensical, deluded and deranged.  The same goes for being a lesbian.  The word is clearly defined and has a specific meaning – and it cannot be logically or rationally applied to men, no matter how the “woke” may try to insist on it.

I could pass a law tomorrow saying that the sky is red, and imposing criminal sanctions and punishments for denying that.  It wouldn’t alter the fact that the sky will remain stubbornly blue, and anyone saying otherwise will be identifying themselves as nuts.  If Norwegian law is attempting to subject “gender ideology” to the same idiocy, then Norwegian law is an ass, and should be condemned for the nonsense it is.

I can’t help smiling as I recall this well-known exchange on Twitter. 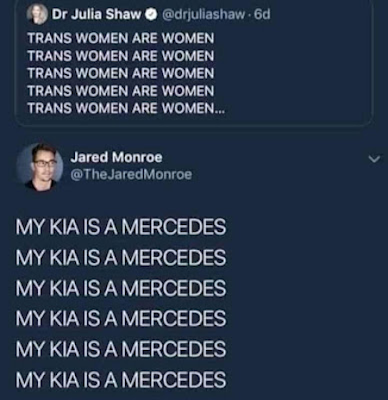 Same logic, same error, same fallacy – but the bottom one is a lot funnier than the top.  If I were Ms. Ellingsen, I’d display that tweet in court in my own defense.  It would make as much sense as the prosecution’s charges!