I’m obliged to The Intrepid Reporter for putting up this poster for a forthcoming rally in Florida.  Clickit to biggit. 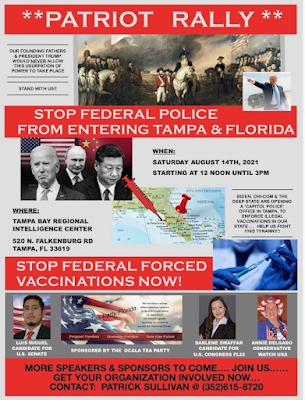 Anytime I see a poster advertising a “Patriot Rally”

No way in hell do I have any interest out of going down there.

I couldn’t agree more.  We’ve seen how “agitators” (widely rumored to be the FBI) promoted the January 6th demonstrations in Washington D.C.  It turns out to have been a first-class “fishing expedition” for the Federal authorities, who continue to detain without trial most of the protesters they’ve been able to identify, and interrogate them and look for evidence to implicate others.  This Florida protest looks to me to be more of the same.  Its organizers may not intend it as such, but you can bet your bottom dollar that intelligence-gatherers will be all over it like white on rice.

Be suspicious of any and every attempt to call together “Patriots” or “Trump supporters” or anyone else opposed to the current powers that be.  It’s highly likely to be used against those groups and any and all of their members.  Our current (illegitimate) Administration is paranoid about opposition, so it’s going all-out to demonize and stigmatize all those involved.

Don’t make yourself a target.  Be the ‘gray man’.